The New Zealand team to face Georgia in their opening match of the World Rugby Under 20 Championship 2016 in Manchester, England, has been named.

Head Coach Scott Robertson and Assistant Coaches Craig Philpott and Willie Rickards have included five Super Rugby players in the run-on 15 as they begin their defence of the title won in Italy last year.

New Zealand open their campaign against first-timers Georgia, who qualified this year by winning the Tier Two competition. Robertson feels the Investec  Super Rugby players have brought both leadership and professionalism to a young team that also includes nine players who will be eligible to play again next year.

“The Super Rugby boys have been superb around leadership and the professional day to day conduct, and they understand how a professional environment works,” explained Robertson.

“They’ve definitely lifted the standard and improved the willingness of the young players. As a coach that’s what you want, the experienced players in the team to be driving it, because we’ve got nine young players who will be looking up to them.

“These guys bring their leadership and they understand the game well, so we’ve got a really good balance.

“Our captain Leni Apisai brings strengths from the Hurricanes and Shaun Stevenson has come in from being in a Chiefs environment and has had a couple of opportunities for them.

“TJ Va’a has also come in from the Hurricanes and although he hasn’t been given much opportunity to play this year because of a knee injury, he’s in great condition. He creates a good combination with Blues player Sam Nock,” added Robertson.

Highlanders centre Patelesio (Sio) Tomkinson also debuts for the team and has been widely tipped as one of the tournament players to watch, while Jordan Trainor who has been involved in the Blues squad, sits out the first game.

Robertson expects some tough competition from all three Pool A opponents Georgia, Ireland and Wales, and has placed a great emphasis on ensuring his team is well-prepared to take on each challenge.

“We arrived a day early to acclimatise and get our body clocks right. We’re making sure we prepare well and we’ve really taken on the learnings from last year – about the basic pressure, confronting the times when things are tough, but importantly to enjoy touring together,” said Robertson.

“Our game planning doesn’t change very much, it’s still 80:20, 80% yourself and 20% them. We really respect everyone when we prepare to play them. For opposition players, they are going to play the test match of their lives because they want to play against and beat New Zealand, and so it’s really important we respect those we play against.

“It’s the first time we’ve come up against Georgia. They love anything in the contact area, they love a drive, they love a scrum, and they’re very similar to an Argentinian or French team. They’re big and strong – it’ll be a bit of Greco-Roman wrestling!”

The match against Georgia, being played at AJ Bel Stadium, Salford, kicks off on Tuesday 7 June at 7.45pm local time (Wednesday 8 June, 6.45am NZT).

New Zealand v Georgia will be broadcast live on SKY Sports 1 from 6.40am NZT.

Semi-finals will be played on 20 June ahead of the 25 June final. 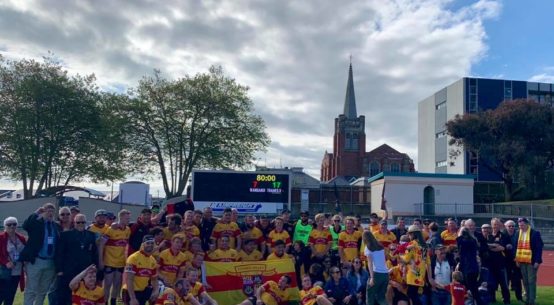