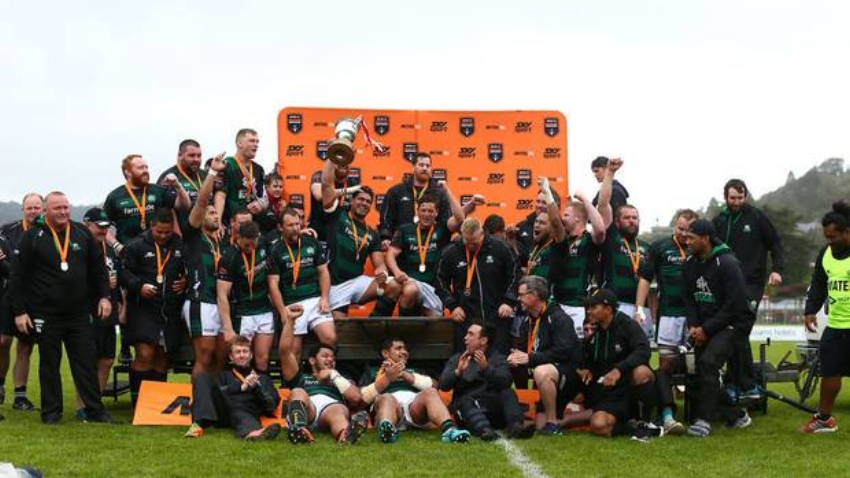 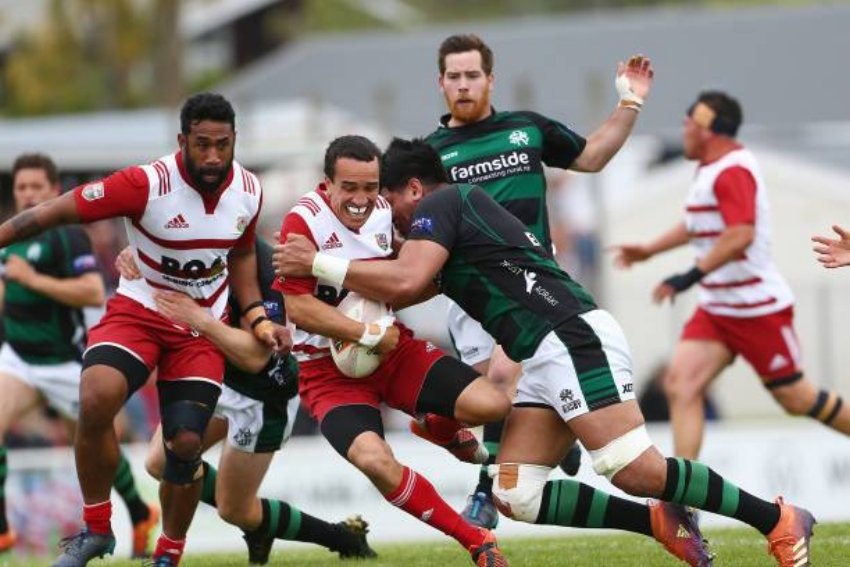 South Canterbury withstood the toughest of wild Greymouth weather and the desire of the West Coast side and their home supporters to lift the Lochore Cup with a 23-19 victory at John Sturgeon Park this afternoon.

Claiming the Mitre 10 Heartland Championship’s secondary trophy for the second time in their history, while finding consolation for missing the Meads Cup playoffs for the first time in five seasons, the Cantabrians made it a double for the Hanan Shield Districts unions – after North Otago had beaten Wanganui in the Meads final in Oamaru on Saturday.

The win was also payback for the 27-24 loss South Canterbury suffered at the end of Heartland pool play to the Coasters in Timaru.

Having first use of the proverbial “15-point breeze”, they got out to a 12-point lead at halftime and then withstood a strong comeback from the West Coast forward pack, while South Canterbury halfback-turned first-five Willie Wright defied the wind and a hostile reception from the Coasters on the sidelines to nail two clutch penalties and put their noses back in front.

For West Coast, having made their third Lochore Cup final and hosting it for the second time, that 129 year wait for an NPC title will have to continue for another year.

On afternoon where the weather deteriorated and brought strong second half rain, while the wind made kickoff restarts a complete lottery, South Canterbury opened their account as they worked the ball up through 18 phases for flanker Anthony Amato to be driven over, scoring his fourth try in two games.

A missed kickoff being claimed by West Coast winger Jade Coleman meant South Canterbury ended up trapped right on their chalk, eventually getting a penalty to clear the ball.

Centre Shayne Anderson made a strong run into West Coast’s half, and although possession was lost, a collapsed scrum gave Wright the chance to step up and nail the penalty for 10-0 in the 24th minute.

Knowing any points could be crucial going into the wind, West Coast broke out of their half through fullback Jess Pittman-Joass, and although he was taken into touch, the home town disrupted the lineout to regain the ball and spread to the grandstand corner.

Coming back the other way, a long pass from halfback Jarrod Ferguson went to hooker and captain Troy Tauwhare, who dummied into a half gap to set up No 8 Amenatave Tukana diving through the last tackler at the corner.

Pittman-Joass couldn’t convert with a team mate holding the ball steady, but South Canterbury knew they needed more than a five point lead at halftime and got them when their captain and second-five Miles Medlicott attacked from a penalty scrum win and put NZ Heartland XV winger Kalavini Leatigaga through with a perfect pass to slide over.

Knowing their ground intimately, West Coast attacked immediately from the restart as NZ Heartland XV midfielder Sione Holani broke through midfield, and the home side got a penalty at a 22m scrum.

From the lineout, the pack drove expertly to put Tauwhare at the back over for a converted try.

Pittman-Joass then tried a long range penalty that struck the posts and nearly saw a chasing Coleman score, but staying on attack through penalty scrums, the Coasters drove reserve prop Daniel Foord under the posts to hit the lead 19-17 after 51 minutes.

Again, the restart proved a test and when South Canterbury secured it and ended up with an offside penalty, Wright calmly muted his head to the chants of the barrackers and slotted the kick — raising his arms and then cupping to ears to a now much quieter park.

After a back-and-forth exchange of tactical kicks, South Canterbury got another penalty for a high tackle on a difficult angle, but the red-hot Wright stepped up again and sent his kick well left for the breeze to whip it back towards the right and through the posts.

Loving it, again the goal kicker asked his sideline critics what they had to say now at 23-19 with the clock winding down.

With eight minutes left and the rain intensifying, West Coast had the chance to steal back the silverware when flanker Steven Soper offloaded in the tackle and centre Alex Lean fended away the cover to dash towards the corner post.

However, his inside pass back to reserve Sean McClure was spilled with the tryline begging.

South Canterbury supporters were still nervous when a lineout throw inside their half didn’t go straight, but great defence on the West Coasters final drive saw them get a penalty to clear out for a lineout and win the trophy.

Jared Smith is sports editor of the Whanganui Chronicle