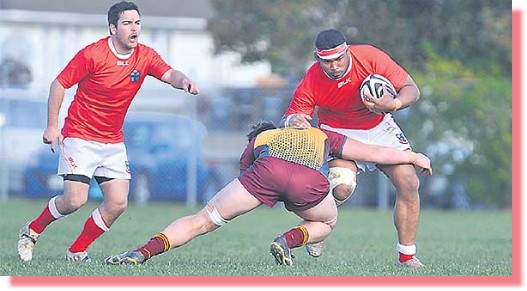 HAWKE’S Bay Development were too big, too strong and too fast for Poverty Bay in Wairoa on Saturday.

But there was no disgrace for the Bay side in their last hit-out before their Heartland opener against Ngati Porou East Coast at Rugby Park this Saturday.

On this performance, Hawke’s Bay would beat any Heartland side. The game was over as a contest after 28 minutes with Hawke’s Bay ahead 35-0 from tries to No. 8 Mark Atkins, right winger Don McIntyre, halfback Isaac Paewai, first five-eighth Tyrone Elkington-McDonald and centre Tom Stanley.

To their credit the Bay, who struggled to contain the opposition’s set pieces, physicality, pace and slick passing, kept plugging away and opted to go for field position rather than three points when awarded penalties.

“The result wasn’t as important as the performance of individuals and some conmbinations for us,” said Bay coach Mutu Ngarimu.

They got their reward when second five Moss Doran, one of the Bay’s standout players, again kicked for touch from a penalty in the 37th minute. Jared Phelps secured possession five metres from the tryline and the forwards drove prop Seymour Lambert over for a five-pointer.

Ngarimu and assistant Rico Gear brought on new signings Brent Ingram (flanker) and Everard Reid (lock), and halfback Sam Parkes for the second half and all made impacts.

Ingram introduced himself to Hawke’s Bay with some vintage big hits. Reid re-addressed the overhelming first 40 lineout tally in the Magpies’ favour and celebrated his debut for the Bay with a late try.

Parkes, last season’s first-choice No.9, showed his Heartland experience with some strong runs but blotted his copybook by overdoing the running when the better option would have been to pass.

Travis Gooch, preferred to Parkes in the run-on side, showed he wants the halfback jersey. Despite being behind a pack going backwards at scrum time and under immense pressure at lineouts, he used what scraps he got to get the ball quickly to his outsides.

Although Hawke’s Bay stretched their lead with a soft try shortly after the restart, the Bay’s second-half performance pleased Ngarimu and Gear.

“Disasppointing first 40 but much better second half,” Gear said. “We now know where we’re at. There were a lot of positives from the last 40.”

Ngarimu said he had used this game and the previous one against Wairarapa Bush “basically as trials”.

“We wanted to give as many players as possible the chance to put their hands up. Some did and other didn’t, but overall I think the headache this week will be who to leave out.”

On Saturday’s performance the biggest contest will be for the No.6 and No.7 jerseys.

Barbara did not play on Saturday as he was in Australia while Mill was unavailable due to family commitments.

Ngatu, who started at No.8, is the side’s most experienced player and must be a strong contender for the No.6 jersey

Mill was outstanding for Pirates this season but Ingram, despite playing in the senior one division, gave the side go-forward on Saturday, as did Latu when he came on.

Allen put his hand up with an impressive display until replaced in the second half. His work-rate was exceptional and his tackle count would have to be among the side’s top players.

The battle for the hooker’s role appears to be between incumbent Geoff Pari and Russell Burns, who, while not selected for the Saturday game due to not being able to train this week, showed his commitment to the side by travelling to Wairoa to support them.