In a battle between the two Hurricanes franchise unions Manawatu came out on top with a convincing 29-3 win and claim top spot in the race for promotion to the ITM Cup Premiership.

The Turbos will face Otago on Friday night while Hawke’s Bay will play Southland at home for their last Ranfurley Shield defence of the season. Hawke’s Bay could have been excused for having one eye on that match as they seemed a shadow of themselves in the match completely dominated by Manawatu.

Manawatu led from the start using the strong breeze to sail out to a 17-0 half time lead. They hardly left Hawke’s Bay’s half of the field and showed great patience to rack up the sizable lead after 40 minutes.

With the wind at their back in the second half Hawke’s Bay fell into the trap of thinking it would be easy but Manawatu had other ideas. In a masterclass of how to play rugby into the wind Manawatu kept things tight and ended up scoring another brace of tries to rub salt into the wound.

One more point next week against Otago will see Manawatu book a home semi final spot and the ‘favourite’ tag to progress to the Premiership in 2015. 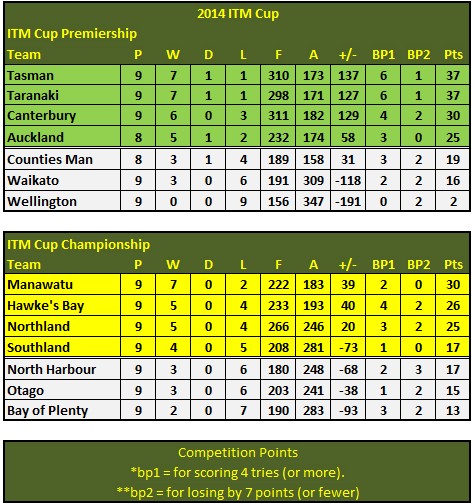