All eyes on the last week of round robin play in the ITM Cup will be on Taranaki who host a Canterbury team needing to get back on the rails.

That is likely to be made a little easier by the return of some heavy artillery from injury and know they now face the harder road to retain their premiership title as they can’t qualify for a home semi-final.

Taranaki already have claimed the home advantage but would dearly love to add a Canterbury scalp.

Counties Manukau are not out of the running for a play-offs berth but face the most demanding route to claim a place. They play Auckland on Wednesday night and then the competition leaders Tasman in the last game of the round, in Blenheim on Sunday.

Tasman go into the game knowing a win would see them finish top of the regular season ladder, not a bad feat after promotion last season.

An Auckland win over Counties Manukau would wrap up its semi-final place while its last game, against Northland on Saturday would be a warm-up for its semi.

Manawatu’s win over Hawke’s Bay was icing on their cake as they had already claimed a home play-off berth in the Championship.

But mathematically there is the possibility that all the remaining teams in the competition are live heading into the last weekend.

The requirement for Hawke’s Bay is simple – beat Southland to retain the Ranfurly Shield and they claim a home semi-final.

Northland, who have to play Auckland in their last game are also in the semis

Southland’s loss to Counties Manukau could prove costly. To have any hope of qualifying for the Championship semi-finals they have the small task of beating Hawke’s Bay to claim the Shield.

Last-placed Bay of Plenty face Waikato and if they claimed a bonus point it could be interesting.

Second to last placed Otago are at home to Manawatu while North Harbour are in Wellington. So whatever happens, and there are plenty of possibilities the last semi-finalist in the Championship should be known around 7.15pm on Saturday. 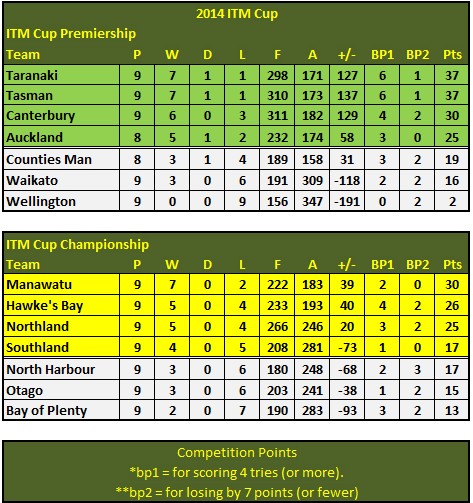 PLAYERS NAMED FOR NZ U’20 CAMP