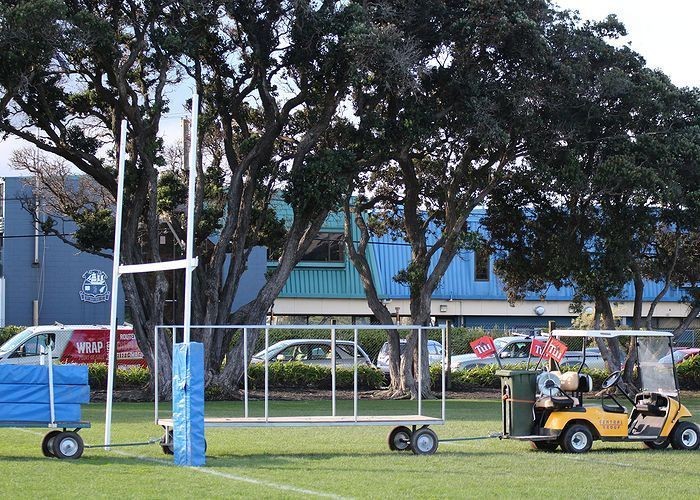 The Lincoln University Rams wrapped up the first round of the Christchurch club rugby competition with a 26-15 win over nearest challenger New Brighton yesterday. Lincoln, who won 10 and drew one of their 11 first round matches, finished two wins clear at the top of the pack to leading chasers New Brighton and Canterbury University.

The second round of the Canterbury Metro Premier competition starts on 13 June, with the competition split into two sections. Defending Hawkins Trophy champions High School Old Boys have sneaked into the championship section with a record of five wins and six losses.

Down the road in Dunedin, Southern and Harbour continued their recent strong form, with both sides registering comfortable wins in the latest round of Dunedin Premier club rugby. Harbour attacked with pace and aggression from the opening whistle in their 59-17 win over Kaikorai at Bishopscourt, while leaders Southern registered a 71 – 3 victory over Green Island at Kettle Park.

The match of the round was the battle for fourth spot, with fourth placed Dunedin visiting fifth placed University A in what resulted in an impressive 60 – 8 win to the University side. At Montecillo, Taieri beat Zingari-Richmond 44-29 while Pirates registered their third win of the season with a 26-16 win against Alhambra Union at Hancock Park.

One club is shining brightly in the Southland Galbraith Shield competition, with Star opening up a two-game lead at the top of the standings to their nearest challenger with a month of regular season rugby remaining. Star beat Woodlands 35-28, while Marist beat Pirates Old Boys 33-28 and the Eastern-Northern Barbarians defeated Midlands 41-10 in the other match.

Of note, the Northern United Women’s team, who include three of Jerry Collins’ sisters – Helen, Brenda and Tiana – wrapped up the Wellington Women’s first round title with a week to spare on an emotional day of rugby in the capital.

After a busy Queen’s Birthday Weekend of rugby in the Manawatu with a double round of matches on the Saturday and the Monday, Leaders College Old Boys continued to set the standard in the competition, beating Feilding Old Boys Oroua 35-13. The other games saw contrasting results, with Te Kawau edging Old Boys Marist 11-5, Linton defeating Varsity 28-21 and Kia Toa over-running Freyberg 107-0 in the day’s bggest win in New Zealand club rugby.

In the Hawke’s Bay, Hastings Rugby and Sports, Napier Pirates and Havelock North are all unbeaten after two rounds.

In Taranaki, leaders New Plymouth Old Boys overcame Inglewood 18-0 to maintain their grip on the top of the standings to officially become the first team to qualify for the semi-finals, with three weeks to play.

Inglewood have dropped to fifth, behind second placed Tukapa who beat second placed Spotswood 31-5 and fourth placed who had an important 21-17 win over Costal. Clifton kept their semi-final chances alive for another week at least with a 25-22 win over Southern.

Bay of Plenty Baywide Premier rugby saw Tauranga Sports ease to a 76-7 win over Paroa to maintain their lead at the top of the table. Te Puke are running a close second, after their 82-0 win over Waikite, while third placed Rotoiti beat Whakatane Marist 55-24. Lower table contenders Te Puna beat Opotiki 45-15, while Mount Maunganui remains in touch with the leaders with a 31-20 win over Whakarewarewa.

Frontrunners Otorohanga and Hamilton Marist continue to set the pace in Waikato club rugby, both registering their 11th wins in 14 games. Otorohanga are out in front after demolishing Morrinsville Sports 41-3, with the Hamilton Marist Ravens in second after edging Melville 34-29. Melville’s loss means they have been overtaken into third spot by University who defeated Fraser Tech 29-13.

Pukekohe beat first round champions Karaka 22-16 in the second weekend of matches in the Counties Manukau McNamara Cup, while Ardmore Marist suffered their second successive close loss, going down 22-23 to Patumahoe.

The winning team won with a four-try bonus point in all seven Auckland Premier club rugby matches, with Grammar TEC cruising to their eighth straight win of the season in beating Waitemata 39-5 in their Alan McEvoy Shield second round fixture. University defeated Ponsonby 44-15, while first round Blue Pool winners Pakuranga opened their account with a 28-18 win over the Manukau Rovers.

In north Harbour, the Western Pioneers are the new leaders after they beat Silverdale 18-16 and previous frontrunners Massey went down 19-20 to mid-table Takapuna. Glenfield are third, beating Northcote 43-24, while East Coast Bays kept themselves in the hunt with a 29-19 win over North Shore.

After a week off for Harding Shield rugby, the Northland Southern Districts Premiers resumed. Wellsford maintained their grip at the top of the standings with a 44-36 win over Waipu. Mid Northern maintained second with a 20-8 win over Old Boys Marist, with a buffer to third placed Mid Western who lost to Otamatea 24-22.