But when the final whistle blew in their challenge against Hawke’s Bay in Napier, the score-line read 57-12 and the boys and green and gold had been taught a lesson in how to finish off a game of rugby.

Mid Canterbury – a Heartland side – headed to Napier knowing they’d need an 80 minute performance to stand a chance against the ITM Cup side, and they set themselves up well, holding a one-point lead early in the second half – the second time they’d led the shield holders.

Mid Canterbury first-five and former Japan international Murray Williams put his side on the board first with a penalty just five minutes in, as the visitors started strongly, dodging a couple of early bullets.

Hawke’s Bay struck back with a penalty of their own to draw level, but a simple game plan was working a treat for Mid Canterbury early on and for the first 20 minutes their defence held strong, they put in some bone-jarring hits on defence, and forced mistakes to defy their underdog tag.

They began to dominate scrums and line-outs, and showed the challengers that turnovers would be punished when Shannan Chase crossed for the opening try of the match after half an hour.

Mid Canterbury went from attack, to scrambling in defence in a flash and being found wanting out wide – a glimpse of what was to come later.

Down by eight, Mid Canterbury could not afford to concede any more points before the break if they were to stand a chance, and instead they added another three points to their own tally through a Williams penalty a minute before the break to make it 11-6.

Mid Canterbury caught a lucky break three minutes into the second half, when Chase dotted down in the corner for what could have been his second try.

The corner post, sideline and put down could have seen it sent to the video referee, but it wasn’t needed.

Communications between the officials had broken down and the associate referee stepped in to report a Hawke’s Bay player offside where the ball was first turned over, so play went back to near the halfway mark where Williams lined up another shot at goal and landed it, taking the score to 11-9.

Another less than two minutes later put Mid Canterbury back in the lead 12-11.

Mid Canterbury hearts skipped a beat soon after when Williams was hit late and looked to be injured, but taking a leaf out of captain Jon Dampney’s book, he got up and carried on just in time to see his opposite slot another penalty to put his side back in front 14-12. Ihaia West added a penalty to extend their lead after 14 minutes of the second half, until Jonah Lowe crossed for two tries for the Magpies in a couple of minutes, making it all of a sudden a 17-point ballgame, 29-12, and from there, it was all one way traffic.

But there were bright spots aplenty for Mid Canterbury and they can come home holding their heads high.

Skipper Jon Dampney led from the front for 80 minutes despite a couple of knocks, and Williams steered the ship well before leaving the field with a suspected shoulder injury, while some Hawke’s Bay players will have bruises to remember them by today.

And that’s what he and his team got, as they were dismantled 57-12 by the Hawke’s Bay Magpies at McLean Park.

But it wasn’t as one-sided as it sounded.

Early in the second half, Dampney and his men even led by one point, before Hawke’s Bay scored 46 unanswered points on the trot.

Interviewed post-game, Dampney said his team put their bodies on the line

“We knew we’d have to play fire with fire, and it turned out they brought their game in the second half,” Dampney said.

“One thing we worked on all week was our defence.

“We knew we had to get up and chop them down.”

They did that, with the Heartland side putting in some big, memorable hits on the ITM Cup side, but in the end the class of the Magpies showed through and Mid Canterbury had no answers.

Hawke’s Bay captain Brendon O’Connor spoke highly of Mid Canterbury, and the other two Heartland teams that have challenged them over the past fortnight – Wairarapa Bush and Horowhenua Kapiti – post-game.

“They have been bloody tough to play.

“They bring a lot of energy into the game.”

But in all three Hawke’s Bay have eventually ground them down and surpassed 50 points, and last night’s win was their 51st career Ranfurly Shield defence.

O’Connor made special mention of the defensive effort of the Mid Canterbury boys last night, which strangled the holders for much of the first half.

“I thought their D was outstanding for the first 50 or 60 minutes, we just had to grind it down,” O’Connor said.

The Mid Canterbury side will return to Ashburton today. 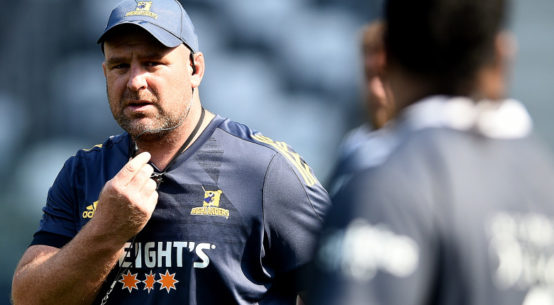