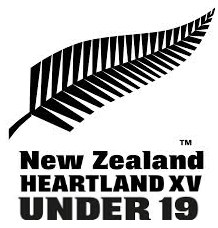 New Zealand’s pinnacle event for emerging young rugby talent will take place next month at Owen Delany Park in Taupo and will once again feature a combined Heartland U19 Team.

Now in its third year, the Jock Hobbs Memorial National Under 19 Tournament showcases the very best of our nation’s young rugby players. Sixteen teams, one from each of the Mitre 10 Cup provincial unions, a second team from Auckland and the Heartland team will compete for the honour of lifting either the Graham Mourie Cup  or the Michael Jones Trophy.

The Heartland U19 Team is unique and differs from other squads in the competition because it is made up of at least one player from each of the 12 Heartland provincial unions.

Heartland U19 Head Coach Mark Rutene believes that the inclusion of a Heartland team offers Heartland players something to aspire to and gives an opportunity for players to develop their game, whilst providing young players with an incentive to remain in the game after they leave school.

“There are at least seven or eight of the players who have played in the senior Heartland teams. The tournament recognises the boys who remain playing for their Heartland unions, but they can still be a part of a New Zealand set up. It’s an opportunity for them to go up to the next level and put their hand up for the New Zealand U20s team,” said Rutene.

“However, the challenge is different from the other teams, as the squad is made up of at least one player from each Heartland union. It means we arrive on the Monday and then only have three training runs before we play our first game. Most of the other teams have been together for at least 6-8 weeks and have played half a dozen games.

“Having been assistant coach last year, I now know what to expect. Last year we opened against Counties Manukau and took a loss, but by the third game we were beating Auckland B and starting to get to know each other and getting to know what we were doing.

The tournament takes place on 15, 18 and 21 September and is part of a week-long event that starts on 14 September and includes a wrap-around development programme for the players, coaches and referees which is run on the non-game days. There are position specific workshops with Super Rugby coaches, as well as sessions focusing on player education and life skills.

A number of players at the tournament went on to play at this year’s World Rugby Under 20 Championship in Manchester, including Tasman  Lock Quinten Strange, Auckland’s Jordan Trainor and Canterbury’s Caleb Makene.

“Fifty of the boys will be picked to represent the U20s for 2017. The tournament and development programme gives the boys a chance to know what they’re getting into. They’re exposed to the other unions, they get to know each other and are fully involved 24/7 for the week and half.

“I’m really looking forward to the tournament, it’s great to be part of it and see the positive impact on the lives of our emerging players,” added Rutene.

The teams are seeded during their pre-tournament games with the top eight playing in the Premiership group for the Graham Mourie Cup, while the other eight play in the Championship for the Michael Jones Trophy. The pre-tournament seeding matches began on 19 August and conclude on 11 September, with each team in each region ranked 1 to 4. The top two teams in each region will go in the Premiership and the bottom two into the Championship.

All 400 players taking part in the tournament will no doubt vie for the DJ Graham Award for the outstanding player of the tournament.

The New Zealand Heartland Under 19 squad is:

Sky Broadcast
Three matches a day will be screened live on Sky Sports.

Social Media
Go to National Under19s Facebook page and use #JHU19s on Instagram for more information on the tournament.