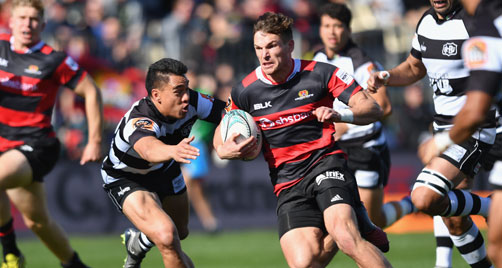 If the All Blacks are proving a step ahead of the chasing pack in Test rugby, Canterbury are looking two steps ahead of their Mitre 10 Cup premiership rivals after their 63-7 dismantling of Hawke’s Bay in Christchurch on Sunday.

What makes Canterbury’s effort all the more impressive is the gold they can introduce from their bench to ensure continuity of enterprise is maintained as they continue their dominance of the competition.

The effects of playing Canterbury earlier in the week looked to take its toll in the latter stages of the game.

Canterbury made their usual fast start, scoring their first try after blindside wing George Bridge ranged outside second five-eighths Rob Thompson to explode onto a short pass at speed and then straightened to cross.

Penalty goals to first five-eighths Richie Mo’unga took Canterbury out to a 13-0 lead until they failed to throw a long lineout throw in Hawke’s Bay’s 22m area. The ball was knocked on and quickly moved to mid-field where centre Jonah Lowe chipped a kick ahead and fullback Matt Garland raced through to secure the ball and pass it back infield to Lowe who raced in for Hawke’s Bay’s try.

But the lively centre paid the price soon after for getting under Bridge as he went for a high ball and was sent to the sin-bin for the last 10 minutes of the first half.

It took Canterbury time to take advantage of his absence, although it may also have been the loss of flanker Tony Lamborn to injury that also contributed. Hawke’s Bay upped their intensity in defence and frustrated the home team. But numbers eventually prevailed when Mo’unga tidied play up and set the base for a crossfield move that saw lock Scott Barrett score.

Up 23-7 at the break, Canterbury found more fluidity in the second half, exemplified by their 30m rolling maul from a lineout which yielded a try for hooker Ben Funnell. It was a classic instance of total control in the maul as Canterbury made it look like unopposed practice.

Earlier, lock Dominic Bird had put some more space between the sides after centre Jack Goodhue made a long break from deep within Canterbury territory. Mo’unga carried the play on and as the pack moved the ball right and back to the left it was finally lock Dominic Bird twisted and turned to get the ball over the goal-line.

The last 15 minutes proved punishing for Hawke’s Bay with replacement wing Nathan Earle having a chance to demonstrate his speed, firstly with a sideline burst where he ran round his marker, and then when finishing a movement on the right flank with a try.

From the restart untidy ball was snaffled and ended in Thompson’s hands and although surrounded by Hawke’s Bay defenders he threaded through and kept going and raced 60m for the try. He was in for a second in the 75th minute to follow a try four minutes earlier to fullback Jordie Barrett.