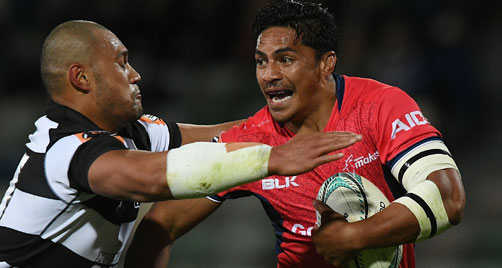 Tasman eased themselves out of the relegation zone in the Mitre 10 Premiership when managing a 36-29 win over Hawke’s Bay in Napier on Saturday.

Hawke’s Bay face a daunting task to retain the Premiership status they achieved last year while Tasman have some breathing space after what was an absorbing clash, as Hawke’s Bay mounted a fine second half recovery.

But once again it was an opportunity to witness more emerging talent on the New Zealand scene and none more than the home wing Jonah Lowe, who was a key performer with some telling plays. Tasman No.8 Pete Samu was another to impress while the young locks on each side, Geoff Cridge for Hawke’s Bay and Quintin Strange for Tasman, highlighted the ability coming through in the position in the New Zealand game.

Cashing in on some early weaknesses in the Hawke’s Bay midfield, Tasman made the most of their opportunities.

Second five-eighths David Havili demonstrated his strength with a strong run in the ninth minute which broke tackles and then with one man left he fired the ball to wing Tima Fainagaanuku who was unchallenged to score.

In a rare piece of possession Hawke’s Bay capialised on a turnover and spread the ball to the other side of the field where first five-eighths Ihaia West put his speed to use to round a defender and then pass to wing Jonah Lowe who made ground on his flank before passing to supporting flanker Trent Boswell Wakefield who score.

It appeared Hawke’s Bay were set to start playing some rugby, but the midfield defence was exposed again in the 20th minute when the Tasman front five started inter-passing like backs to create an opportunity for No.8 Pete Samu to demonstrate his strength on the charge. Five tacklers tried to stop his cork-screwing effort and five failed.

Lowe went close to providing some welcome relief for Hawke’s Bay with a sideline break and centring kick but when having to give the ball a final tap he lost momentum and Mitchell Hunt, the Tasman fullback, was able to ground the ball.

And to rub salt into the wound, Tasman poured back downfield and centre Kieron Fonotia with some old-fashioned crash, bang, wallop got a break and powered his way over in the 31st minute.

Hawke’s Bay had a final chance in the half but with a gap open Tiaan Strauss wasn’t able to hold the ball.

The missed tackle count of the first half which saw Hawke’s Bay conceded 17-4 and resulted in Tasman having 61 percent of possession, was turned around in the second half and it was the 54th minute before the next try was scored. But, inevitably, it followed a Hawke’s Bay mistake when a West pass went to land not hand.

Banks was through in a flash to toe the ball ahead and he had the speed, and ability to make the pick up to dive over for the bonus point try.

With 15 minutes left flanker Tony Lamborn cashed in on another break on the flank where Falcon doubled round to get the ball into the Tasman 22. They were penalized about 10m out and Lamborn took the tap and crashed through a posse of players to win the touchdown.

Five minutes later Jonah Lowe was given space after a blindside break by replacement halfback Chris Eaton and he provided another chance as play carried right up to the line and as the ball dropped free from the breakdown area, and replacement prop Jason Long picked it up and drove over.

It seemed Tasman had made things safe in the 76th minute when Samu made another powerful break up the centre. He linked outside where replacement back Alex Nankivell pulled in a high pass and recovered to feed left wing Caleb Makene in for the try.

However, an errant Banks pass was picked off by Lowe who ran 40m to score a try and converted it to set his side up with a chance for a draw. Unfortunately they ran out of time.