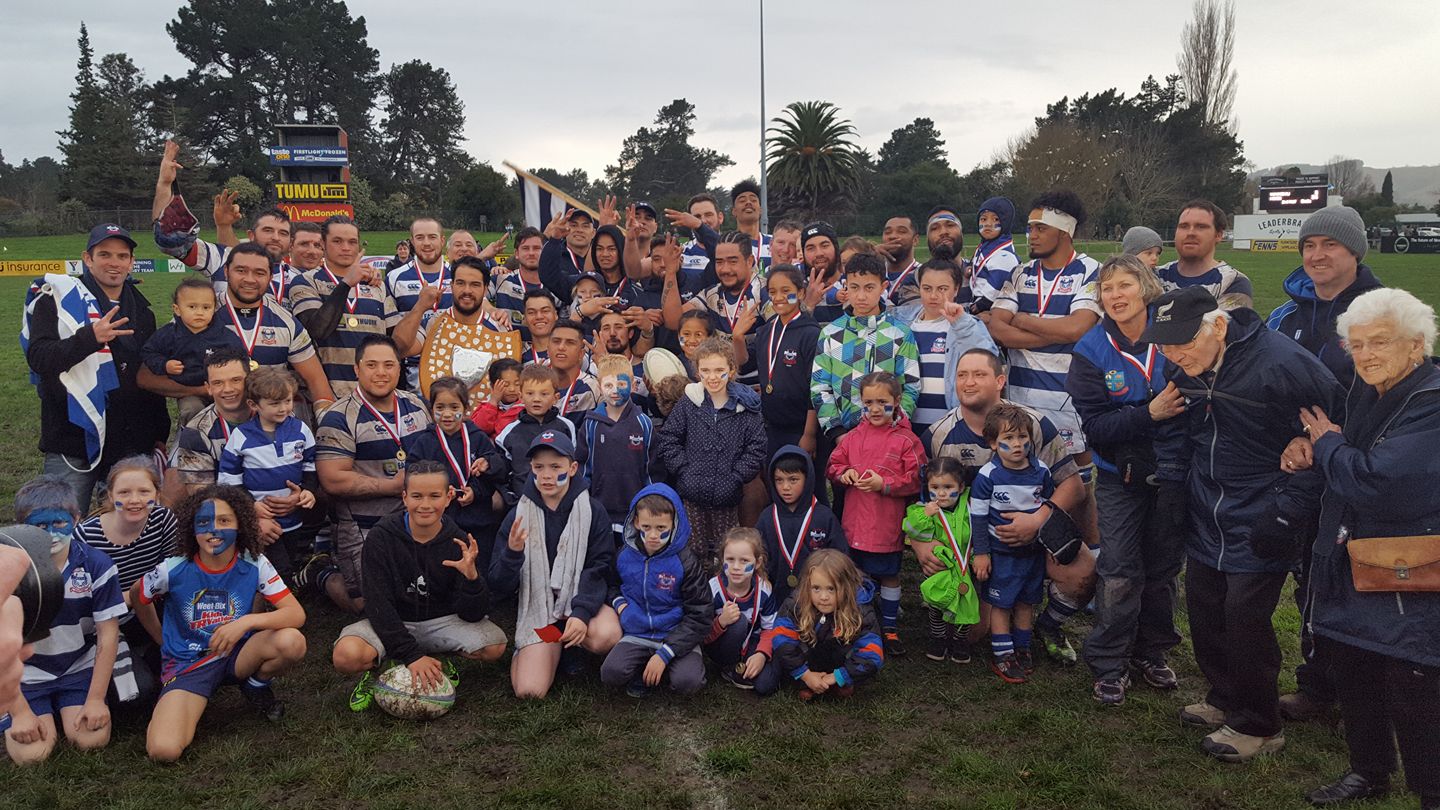 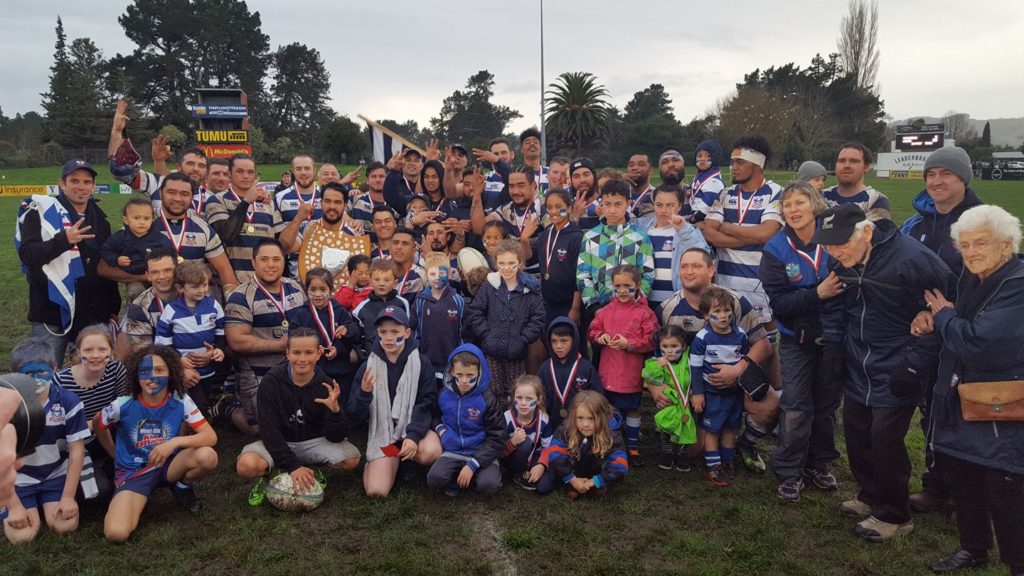 CHAMPIONS: The Earthwork Solutions HSOB side, co-coached by Jamie Hutana and Scott Leighton, did it in emphatic style, defeating first-time finalists Aon Waikohu 34-3 in one of the most dominant displays of recent history. An intercept try by winger Andrew Tauatevalu put HSOB on the board and from there they were in almost total control, scoring four more tries as a valiant Waikohu tackled themselves to a standstill.

A JUBILANT High School Old Boys team in party mode after securing their third consecutive Lee Bros Shield as Poverty Bay premier club rugby champions at Rugby Park on Saturday.High School Old Boys hoisted the Shield for club rugby supremacy at Rugby Park on Saturday for the third year running on the back of a monumental performance by their forwards.

Earthwork Solutions HSOB shut first-time grand finalists Aon Waikohu out of the final with straight, hard running.
The 34-3 scoreline was one of the most emphatic results in shield final history.

“The boys know what it takes to win a final and they showed it,” said HSOB centurion, co-coach and player Scott Leighton, who came on in the second half.

Waikohu gave it everything but could not contain the clinical, relentless driving play of the winners’ pack, led brilliantly by rampaging No.8 Siosiua Moala.

He produced one of the great displays by a forward in a premier club final and it was appropriate he put the icing on the victory cake by muscling his way over for the blue and whites’ fifth try on fulltime.

“I thought our forwards were massive,” said HSOB co-coach Jamie Hutana. “You don’t often see players carry the ball so many metres, like Siosiua did.”

HSOB opened the scoring in the sixth minute with an intercept try from 50 metres out to left wing Andrew Tauatevalu.
After Waikohu fullback Ethine Reeves missed penalty attempts in the 10th and 17th minutes, HSOB struck again in the 22nd minute when they stole a throw-in 10m from the Waikohu line and prop Russell Burns went over from a forward surge.

Waikohu came back with a penalty to Reeves at the 30-minute mark, and had chances to score further but failed to capitalise, and the half ended 12-3.

HSOB went straight on the attack after the break but Waikohu held them out with tenacious defence.

Pressure and possession eventually told and in the 55th minute right-winger George Halley was put into space and scored out wide.

Leighton, who came on moments before and played his part in the try, slotted the conversion to make it 19-3.

Minutes later, after more aggressive and straight running by the HSOB forwards that ended deep in the Waikohu 22, the ball was spun wide and Halley stepped two players to score his second five-pointer.

Leighton added a penalty at the 69-minute mark and for the final period it was all HSOB as they threatened the Waikohu line time and again.

Waikohu, despite being out of the game, never stopped tackling but could not hold out Moala in the final 30 seconds.

Former HSOB coach and now Ngati Porou East Coast co-coach Wayne Ensor was on the sideline. He described it as a dominant performance.

“This was the most convincing grand final win you’ll ever see.

“They had obviously been well prepared for it and I am very proud of Jamie (Hutana) and Scotty (Leighton).
“Their coaching has taken this team to new heights.”

Leighton said the team started well and he felt their experience showed from the beginning.

He enjoyed his own contribution and said he was “ready to go again next year”.

Hutana was “over the moon”.

“There have been a lot of sleepless nights lately for me as a coach, but the boys do the running. To see the hard work pay off like it did today is awesome.

“It was an emphatic win but it was also humbling. Everyone contributed, from the starting 15 right through the bench.”
Moala was the standout forward but pushed any praise on to his teammates.

HSOB prop and co-captain Jody Tuhaka said they could not have asked for a better team performance. “We all wanted to add our own contribution to the club’s legacy. Words cannot express how proud I am of the boys for what they have achieved.”

Co-captain Hayden Stuart paid tribute to Waikohu’s contribution to the premier season. “Congratulations to them for the long way they have come.”

“They were outstanding. But despite the way the final went for us, I feel happy for my boys. Big ups to them for the way they made history this season. We did not win the shield but we still made history.”

Waikohu skipper Hayden Rutene said it had been an emotional ride towards and into the final.

“HSOB were a strong team and we knew they would be. We couldn’t stand up to it on the day but I am proud of my boys, just the same. We now know what we need to look to next year. We also have to give big ups to our Te Karaka community and all our supporters.”

Prop Toru Noanoa was Waikohu’s player of the day for his work rate, with Reeves close behind.

Reeves, who played himself to a standstill and made some electric runs, said he felt “a bit down . . . but there’s a good vibe in the team. It’s been a good year and we have made some history”.

Halley was named player of the final.

Tapuae are the Poverty Bay Senior 1 champions for 2017. They beat YMP Bumbles 14-11 in the curtain-raiser to the premier final.