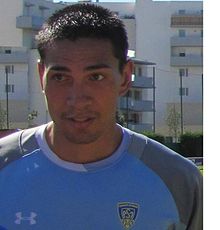 After playing for Waikato and the Chiefs, he made his first and only Test appearance on 23 November 2002 against Wales at the Millennium Stadium in Cardiff. Following this, King suffered several injuries hindering the progress of his career in New Zealand and taking him out of the NPC and Super 12. After recovering, King was recruited by Stade Français in November 2004.

After an unsuccessful six months in France, he moved to Wales to play for the Llanelli Scarlets, where he played until 2011. He has made 141 appearances for the Scarlets scoring 185 points (37 Tries).

In 2006, he was voted the best outside centre in the world by readers of Planet-Rugby.com for their 2006 World XV. King was the only one of the players voted into the side that had not played any international rugby in the preceding 12 months.

In January 2011 King agreed to join Clermont Auvergne at the end of the season.

After three years in France, King rejoined the Scarlets signing a two-year deal ahead of the 2014/15 season.

On 30 October 2015, King played alongside his son Jacob Cowley for the Scarlets against the Newport Gwent Dragons, making them the first father and son pair to play together in the Pro 12.[3]

On 6 May 2016, it was announced that King would be leaving the Scarlets and joining Jersey Reds for the 2016-17 season.

King returned to New Zealand in 2017 and played a number of games for Mid Canterbury club side Southern helping them to win the local Watters Cup competition final on the 23rd of July at Mayfield.