They gutting out back injuries, cutting casts off broken hands, and calling on all their big match experience to get revenge over their confident neighbours down the road.

Those are the stories that go along with Steelform Wanganui’s attempt to make history with an unprecedented Meads Cup three-peat in the final against Horowhenua Kapiti at Levin Domain tomorrow.

Buoyed by the upset win over a self-destructing South Canterbury and the disappointing officiating in Timaru last Saturday, only players the magnitude of prop Viki Tofa and backline general Craig Clare could force their way back into the squad after such a gutsy team effort.

Back from his brother’s wedding, Tofa is currently bracketed with Kamipeli Latu for the loosehead prop position, with coach Jason Caskey leaning Tofa’s way due to his tackling around the fringes, which will be vital against a home side that lives and dies on their forward set-piece.

The “only option” Hamish Mellow will start again at tighthead after playing through his sore back in the first half of the semifinal.

Clare will move to second-five after a campaign at centre, with the new NZ Heartland XV selection eager to prove a point after being sidelined for a fortnight with suspected concussion from being taken out during Wanganui’s frustrating 15-8 loss to Horowhenua-Kapiti on October 7.

Young Ethan Robinson moves back to the bench, but is also bracketed thanks to the surprise return of the team’s top tryscorer Timoci Seruwalu, who likewise hasn’t played since that game.

“He’s taken [the cast] off, he trained on Tuesday,” said Caskey.

“We’ll see a bit more tonight [Thursday]. Make sure it’s not going to damage him.”

Centre Kaveni Dabenaise (knee) and reserve halfback Tom Stewart (back) are likewise not 100 per cent, but thanks to having depth available again, Caskey will take no chances with a sixth Meads Cup on the line, despite each player swearing on whatever deity they can they are ready to go.

‘It’s not just listening to what they say, I’ve learnt from that in the past.

Cade Robinson trained both days this week so keeps the reserve locking spot ahead of Josh Lane, but no doubt the key man will be Wanganui’s other fresh NZ Heartland XV selection Sam Madams, who made sure Heartland coach Barry Matthews got his number with a dynamic performance down south.

“Well deserved to be in there,” said Caskey.

“Outstanding workrate, that’s obviously his strength. He worked himself to a standstill [in semifinal].”

Always preferring a well-rounded, attack-positive style of game, Wanganui’s contrasts with Horowhenua-Kapiti could not be more obvious.

The heavens opening on October 7 suited the home side right down to the soggy wet ground, but even with reasonable weather forecast for tomorrow, Wanganui would be naive to think it’s just going to take a simple lift in intensity.

Unbeaten at home, Horowhenua Kapiti kept their cool against a desperately unlucky Buller last Saturday, with radar-like James So’oialo kicking his sixth penalty with 30 seconds left to win 18-17, after Buller played 20 minutes of the first half with 14 men but scored two tries in the last 15 minutes.

Forwards Tyson Maki, William Lander, Robin Praat and captain Ryan Shelford will do everything they can to frustrate Wanganui, spoil their lineout, spend time on the ball, tackle hard and give So’oialo every chance to win the game.

“They’re not the flashest or most dangerous attacking team in the competition, but they know what they do,” said Caskey.

“Nothing wrong with that – it’s obviously worked for them. They’ve only lost once.

“We got our ideas on what we know how to play.”

But given his team have taken to dubbing themselves “the Battler Boys” – a play on their official Butcher nickname – Wanganui like the fact this final is a real challenge.

“It’s quite nice not to be red-hot favourites for once. That probably changes a bit coming into the weekend,” said Caskey.

“[Horowhenua-Kapiti] have to feel it, especially if they have a big home crowd.”

The Wanganui lineup is 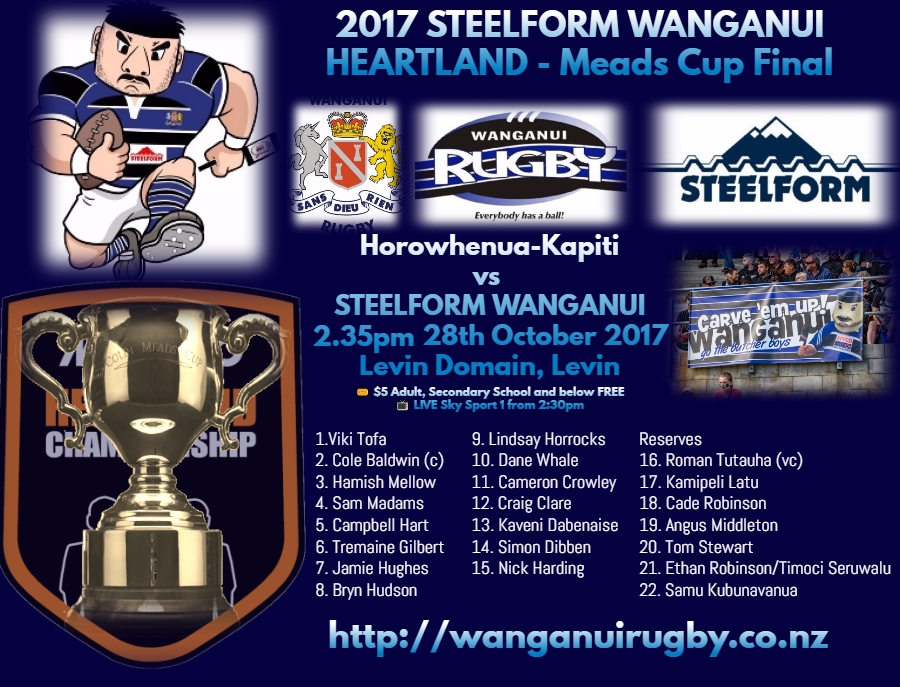 Away points hard to come by