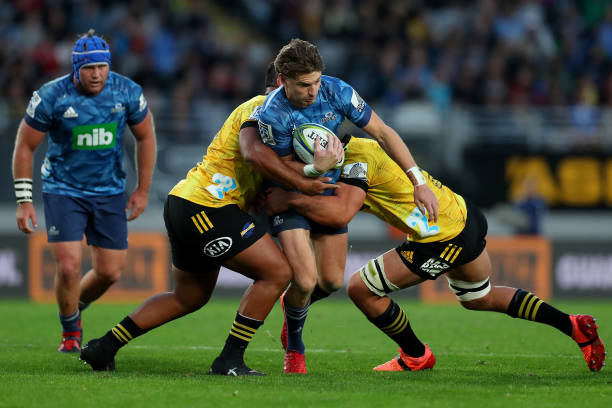 Showing more of the confidence that marked their improvement in the regular season, the Blues revelled in a packed stadium to beat the Hurricanes 30-20 in their Super Rugby Aotearoa game at Eden Park on Saturday.

Encouraging for the Blues also was the way some of their younger players continued to step up in the face of a determined Hurricanes effort. No.8 Hoskins Sotutu picked up where he left off earlier in the season while wing Mark Telea was also able to extend the reputation he has so quickly developed at this level.

Backing the contributions of the pack, at large, was the control of Otere Black at first five-eighths. He relished the chance to set the tactical options for the side and with the man of the moment Beauden Barrett at fullback, and the bullocking running of determined centre Rieko Ioane there was plenty of intent to throw back at the Hurricanes.

Hooker Dane Coles had made the point he would be looking to renew his acquaintance with former team-mate Barrett, something he laid on in heaps when scoring a barn-storming try by bumping off Barrett before scoring in the corner.

Critical mistakes, especially at the lineout, cost the Hurricanes and as they were required to play catch-up late in the second half, errors were made under pressure.

But both sides, like those in the Highlanders-Chiefs game on Saturday, would reflect on the penalty count. The Blues conceded 15 penalties to 13 by the visitors.

The crucial statistic may well have been the turnovers won, 11 to the Blues and six to the Hurricanes. The Blues also had to make 145 tackles to 105 but the Hurricanes had the higher miss ratio.

While the Hurricanes scored first through a penalty goal to Jackson Garden-Bachop, it was the Blues who scored the first try of the game.

An attempted grubber kick by second five-eighths Ngani Laumape was cleaned up by Black and he made good use of the ball to kick to touch just out from the Hurricanes 22m.

The Hurricanes won the lineout. A kick was sent to Telea’s wing who set up the ruck. The ball was moved and centre Ioane broke the defence and created room on his outside for wing Clarke who beat one tackle attempt and then turned infield at pace to run in beneath the posts 12 minutes after the start.

Not wasting their time, the Hurricanes took advantage of a Blues touch clearance to win the lineout and then move the ball left and right, the latter effort finding hooker Coles running the wing’s line on a 30m charge for the line.

Knowing old team-mate Barrett was coming across in cover, Coles lent into the tackle and bumped him off to score out wide.

After 18 minutes, the Blues worked a lineout maul in the Hurricanes 22m area and Clarke was able to charge ahead to set up chances for lock Patrick Tuipulotu and Ioane to advance within five metres of the line.

Then finding the Hurricanes defence absent, Barrett was able to slip an inside ball to Telea who found TJ Faiane on his outside to score.

Coles almost snared a second try after a lineout move but while he was contained the ball was moved to the blind and wing Ben Lam would have scored had the final pass not been forward.

But they were playing under advantage and from the subsequent scrum Garden-Bachop and fullback Chase Tiatia worked a move which left Lam unmarked on his wing to score.

Chances had been few after the restart but 10 minutes in, a Faiane grubber kick found replacement flanker Dalton Papalii and he sprinted through to claim the try.

The Hurricanes scored through a try to replacement halfback Jamie Booth but it was too little too late to deny a home team with the bit between their teeth.

Under review: Wellington union looks within