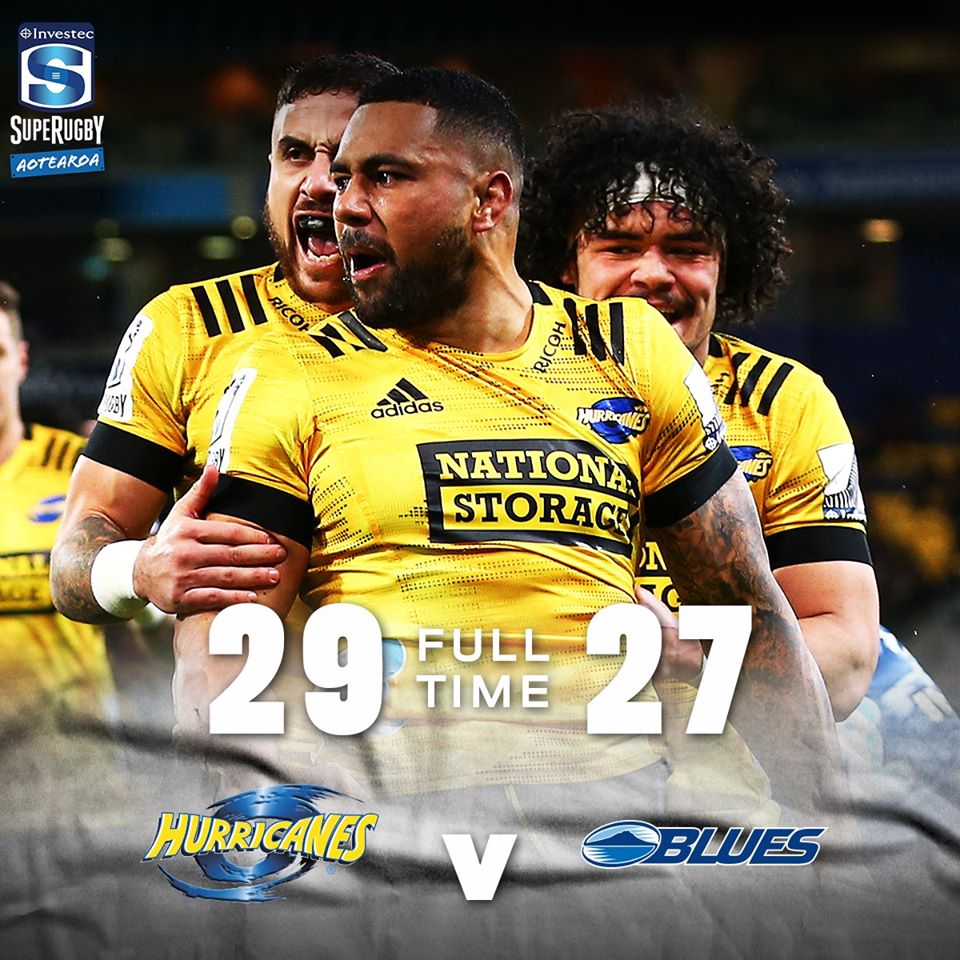 Absorbing some determined Blues defence, the Hurricanes sealed a 29-27 win in their thrilling Super Rugby Aotearoa contest at SKY Stadium in Wellington on Saturday.

It was a game that defied the mid-winter conditions with a slippery ball and the home team had second five-eighths Ngani Laumape to thank for so often giving them what proved the winning momentum with his hard running. There was also a superb wide conversion landed by fullback Jordie Barrett to win the game.

The Blues were denied possession for long periods in the second half, but their defence was strong and after a night in which their lineout had been supreme, the Blues fate was sealed when they failed to win their last lineout of the night.

The Blues retained their second place by winning a loser’s bonus point but have the Hurricanes only one point behind.

The Blues had first points after only a minute courtesy of an Otere Black penalty goal but the Hurricanes responded immediately when the original transgressor Laumape, got the ball on the end of a nine-phase play.

On the left flank, he took a long pass from first five-eighths Jackson Garden-Bachop and stood up Blues fullback Beauden Barrett with ease to run at the corner three minutes into the game.

The Blues responded in the ninth minute when Black ran from first five-eighths when stepping back inside before feeding blindside wing Mark Telea. He drove ahead and from the resulting ruck, Barrett got the ball with a gap and sped through it and raced 30m for the try.

In what was shaping as a non-stop contest, Laumape was again offered into space from a pass made by flanker Du’Plessis Kirifi, another strong performer. He blasted into Barrett to bump him off only to be pulled down just short of the line but in the defensive containment, wing Emoni Narawa was yellow-carded for not rolling clear after his tackle.

Several times the Hurricanes had the chance to take advantage of the reduced Blues defence, the best chance being when centre Peter Umaga-Jensen ran a superb line only to see the Blues scramble and save their line.

Their inability to score was compounded when an easy penalty goal attempt by Jordie Barrett rebounded into the field of play where the Blues secured the ball and cleared downfield, winning a penalty on halfway which Beauden Barrett pushed into the corner.

From the lineout, the Blues rolling maul moved quickly and it was flanker Dalton Papalii who scored, only to see Black hit the post and miss the conversion.

Four minutes later, the Hurricanes turned the tide back on the Blues when a Jordie Barrett penalty into the corner resulted in a take by lock Scott Scrafton set up their own maul to provide the try for flanker Reed Prinsep.

Into the second half the Hurricanes mid-field of Laumape and Umaga-Jensen made strong runs to create the first try of the half, to hooker Dane Coles.

Both sides made changes around the 49-minute mark and in the quest to settle players, it was the Blues who took advantage of winning more possession to push penalties into the corner and in the 56th minute it was No.8 Akira Ioane who drove after a lineout maul to score.

Perenara was caught infringing at the base of a Blues scrum and from another Barrett kick to the corner, the lineout drive resulted in a try for hooker Kurt Eklund, a deserved scorer after a fine game with ball in hand and especially in his throwing to lineouts.

Five minutes from the end, the Hurricanes were able to employ their lineout drive again and after a TMO consultation replacement hooker Asafo Aumua was awarded the try. And Barrett sealed the deal with a wide conversion to claim their winning two-point lead. 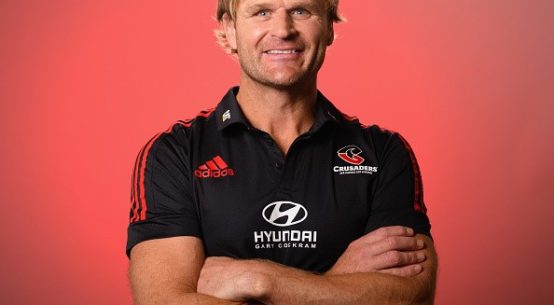 Scott Robertson recommits to New Zealand Rugby and the Crusaders