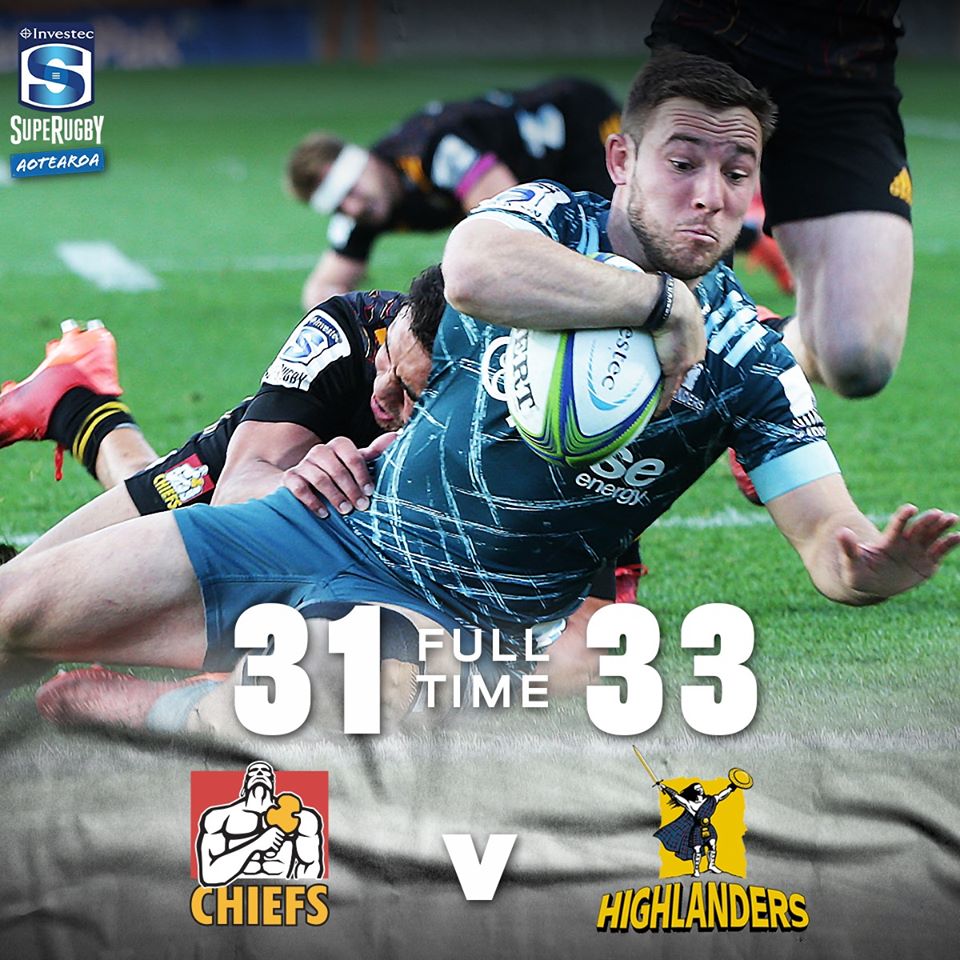 Down 7-24 at halftime, the Highlanders extended the Chiefs’ misery in Super Rugby Aotearoa when scoring after the final hooter to win 33-31 at FMG Stadium in Hamilton on Sunday.

It left the Chiefs winless in the competition and repeated their first-round game when a late dropped goal secured them a win.

The winning try came after another of the interminable lineout drives yielded ball for skipper and halfback Aaron Smith to run wide and feed second five-eighths Patelesio Tomkinson into a wide gap for the winning try.

It was a superb fightback by the Highlanders, especially considering the Chiefs scored immediately after halftime to extend their lead to 31-7. But the Highlanders refused to lie down.

Smith was outstanding in leading his side, flanker Shannon Frizell was momentous in the loose and wing Josh Gibson made up for lost time in his first game with some powerful running.

Chiefs flanker Lachlan Boshier looked to have done the damage for his side with some outstanding breakdown play toward the end but his work was for nought when subsequent mistakes were made after he had secured ball.

The Chiefs had started in outstanding style, something they haven’t always done in the competition.

A high ball taken superbly by fullback Damian McKenzie set the Chiefs up with ball they moved with effect before a sideline ruck set up by hooker Brad Slater.

From it, flanker Sam Cane getting the ball at second receiver and feeding fellow loose forward Lachlan Boshier through an unpatrolled gap and he had a 25m saunter beneath the points for a fourth-minute try.

The Highlanders missed out on a chance for points when Mitch Hunt had a penalty goal attempt drift across the posts. From that the Chiefs worked their way back down field and when halfback Brad Weber sensed space around a ruck, he ran hard, and once going to ground the ball was moved to the short side where McKenzie feinted left before feeding back inside to centre Anton Lienert-Brown who went through to score.

Again when a ruck infringement resulted in another Chiefs’ kick to the corner, their rolling maul did the rest as Slater scored in the 20th minute.

That was sufficient to finally rouse the Highlanders and flanker Shannon Frizell demonstrated the lift in intent when soaring high to take the restart to give the side momentum. That produced reward in the 30th minute when No.8 Mikaele Tu’u drove over after the Chiefs conceded three penalties. In the process captain Cane, who seconds earlier had been delivered a warning to his side by referee Mike Fraser, was given a yellow card.

Determined to finally end their losing stint in the competition the Chiefs stormed into the second half with another punishing lineout maul which produced a second try for Slater.

But the Highlanders weren’t done for, and it was when a change of direction by halfback Aaron Smith had Josh McKay bursting into the line at first receiver and his long pass was flicked on by Michael Collins to Mitch Hunt who sprinted through from 30m out to score.

They were back in soon after when another McKay incursion through midfield saw him flip a pass to Smith who raced ahead, chased without success by Weber. He passed to replacement lock Manaaki Selby-Rickit who in turn fed a ball to Smith in support for him to go over to score in the 56th minute.

The Highlanders worked hard to narrow the gap and finally achieved their breakthrough with five minutes left. It came as replacement wing Jona Nareki came from depth into the line, punched a hole in the defence, sped into space, fended off Tahuriorangi and got his side within five points