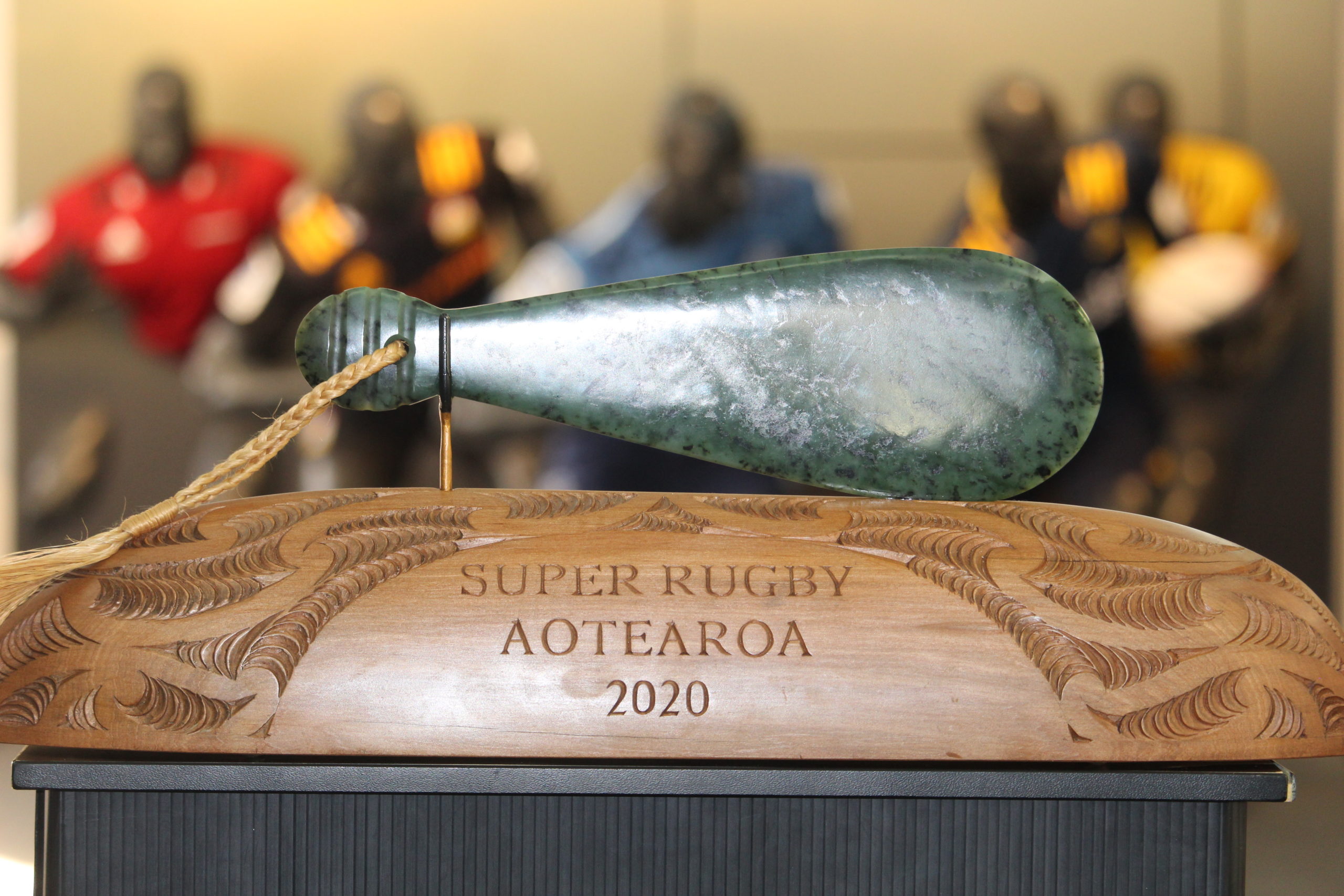 New Zealand Rugby (NZR) has unveiled Tū Kōtahi Aotearoa the unique trophy that will be presented to the winner of Investec Super Rugby Aotearoa 2020.

Created by Otaki carver Bill Doyle, the trophy represents the coming together of the Blues, Chiefs, Hurricanes, Crusaders and Highlanders in the wake of the disruption and turmoil caused by the Covid-19 pandemic.

Tū Kōtahi Aotearoa, which translates to Stand As One New Zealand, will be on display at Orangetheory Stadium in Christchurch for the Crusaders crunch match against the Hurricanes at 7.05pm on Saturday night (25 July) before heading north to Eden Park for the Blues v Chiefs match at 3.35pm on Sunday (26 July).

The trophy remains up for grabs heading into Round 7 of Investec Super Rugby Aotearoa with the Crusaders holding a five point lead at the top of the table on 18 points, ahead of the Blues (13), the Hurricanes (12), and the Highlanders (10). Only the Chiefs (4) are mathematically out of contention.

Carved out of totara, the Tū Kōtahi Aotearoa base represents an upturned waka. The traditional pounamu mere mounted on top signifies the strength and unity rugby has shown to create Investec Super Rugby Aotearoa and bring the rugby community back together.

NZR Kaihautu Luke Crawford said the name of the trophy derived from a Māori whakaaro (thought) coined while the country was in lockdown.

“That thought spoke to Noho Tawhiti, which means to stay apart, but also Tū Kōtahi, which means do things together. As a country we needed to stay separated, but still be in this together to fight Covid-19.

“The bigger concept around it was the value rugby has had in providing a platform for the country to reunite post lockdown… so that was the korero, Noho Tawhiti Tū Kōtahi.

“In the context of Investec Super Rugby Aotearoa it’s fitting that we say ‘Tū Kōtahi Aotearoa’ or ‘Stand As One New Zealand’, which is what the five clubs, the fans and the rugby community are doing in 2020.”

Crawford said the trophy was intentionally rooted in humility (Whakaititanga), with the pounamu and accompanying taura (rope), repurposed from those normally presented to players for reaching 100 Investec Super Rugby Caps.

“It has been a difficult time for many with job losses and economic impact, so it needed to be humble but still meaningful and authentic and also to serve as a maumaharatanga, or memory, of this time. ‘Ahakoa he iti he pounamu’ – ‘It is humble but it is precious’.”

Doyle said he was “honoured” to be asked to create the trophy, which was designed in consultation with Te Wānanga o Raukawa master-carver Jason Hina.

The designs in the wood were puhoro, traditional Māori leg tattoo, and unanahi, which represent the scales of a fish.

“The unanahi represent Tangaroa [the Māori God of the sea]. They represent protection [for the waka during its journey]. The puhoro represents speed and balance and deception and everything you would have in a game of rugby.”

The trophy has a special rugby connection for Doyle, whose son Sam (Ngāti Raukawa) was an original member of the Hurricanes in 1996, played fullback for the Māori All Blacks against the 1993 British and Irish Lions and represented Manawatu and Wellington.

Minnows just too good for Wanganui