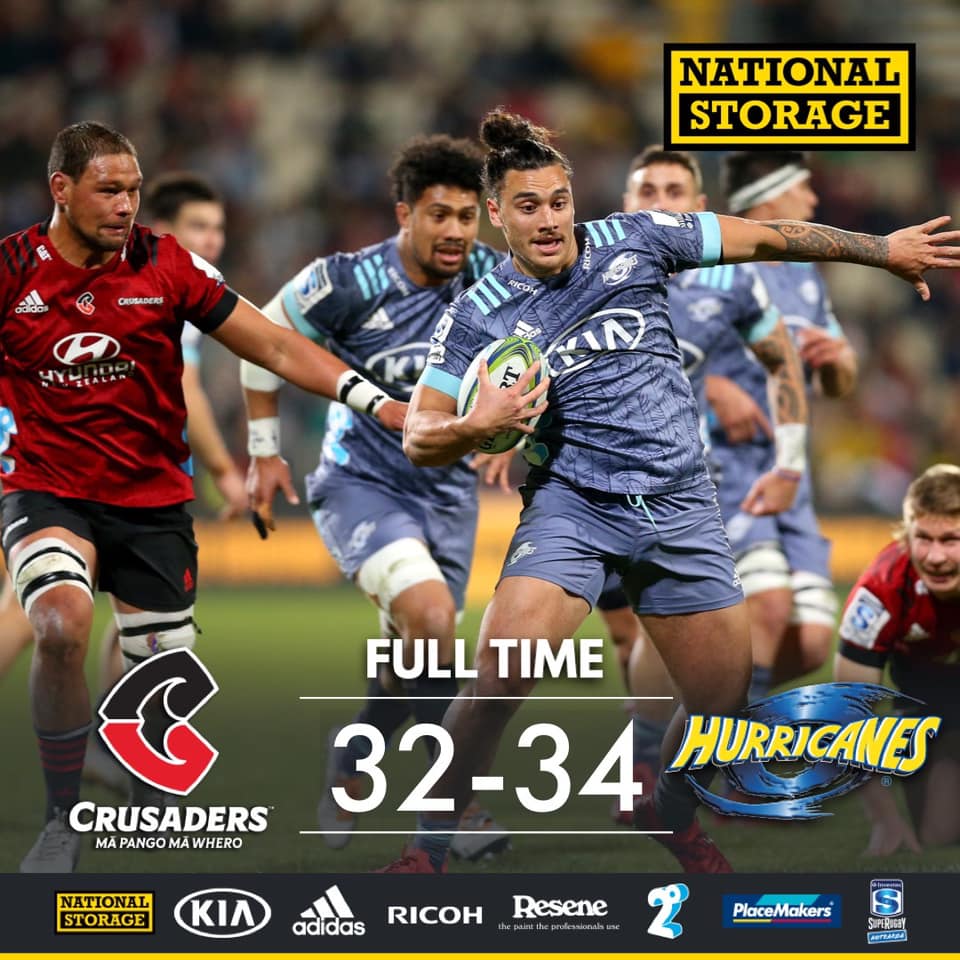 Hurricanes’ confidence and application was rewarded when they ended the Crusaders’ 36-game unbeaten streak at home when claiming a 34-32 win in Christchurch on Saturday.

The Crusaders last lost in round 17 of the 2016 season and the Hurricanes success has kept the Super Rugby Aotearoa competition alive.

Outstanding in the win were flankers Du’Plessis Kirifi and Reed Prinsep while No 8 Ardie Savea was impressive off the back of the scrum. The Hurricanes lineout also won lineout ball from the home team while among the backline the centres Ngani Laumape and Peter Umaga-Jensen were inspirational and once they were both forced to leave the field, the example was taken up by their replacements.

And fullback Jordie Barrett’s all-round performance, in kicking, goal-kicking, defence, ball-running and in the final play of the game, in winning ball at the breakdown, was the icing on the cake for the side.

Home first five-eighths Richie Mo’unga again produced two pieces of magic to get the Crusaders close but that wasn’t enough as his final conversion, which would have levelled the scores, just drifted wide of the posts.

A dispute with replacement lock Quinten Strange after Barrett’s action at the breakdown had won the final penalty of the game, which was kicked to touch to secure the win, resulted in Strange being yellow-carded to complete the coup de grace for the Hurricanes.

It was another outstanding game in a competition that continues to produce quality play one week after another.

A penalty awarded when Prinsep was blocked out of making a tackle attempt on lock Sam Whitelock only to have Joe Moody get in his way, resulting in a no-arms wrap on Moody, had the direct consequence of the first try of the game to Mo’unga.

The ball was kicked to the corner and after the drive the ball was released for second five-eighths Jack Goodhue to take the ball to the line where Mo’unga received the ball and got over the line.

The penalty may have been technically correct but at the same time there was no consideration of Moody having been off-side, or in front of the ball, reducing the chance to defenders to have a clear shot at the ball carrier, something that has become a free card for players in recent years.

Constant mid-field kicks, especially from the Hurricanes, eventually produced a mistake from fullback Will Jordan in the 22nd minute. The Hurricanes secured the loose ball allowing centre Umaga-Jensen to break through the defences and give the visitors momentum. They moved the ball left then right before Prinsep, Laumape and Umaga-Jensen, again creating space which resulted in wing Wes Goosen to score.

Barrett landed a penalty goal to reclaim the lead but a freakish chance was capitalised on by Crusaders wing George Bridge. It came after right-wing Sevu Reece broke the Hurricanes’ close defence off a short-pass from halfback Bryn Hall.

Reece raced across field and then threw a huge hail Mary pass which Bridge got a boot to. The ball flew into the in-goal area and Bridge was able to run through and touch down in the 30th minute.

But the muse was with the Hurricanes and they got themselves back into the Crusaders half and when wing Ben Lam combined with hooker Asafo Aumua, they carried the ball into the 22m and when it was released to the right, quick hands beat the man as Goosen got the ball at speed to race through the defence with ease for his second try.

However, Laumape was forced to retire hurt when hurting his forearm when attempting a tackle on Moody. But, in spite of a lack of possession in the third quarter, the Hurricanes refused to panic and had their reward when Laumape’s replacement Vince Aso produced a key play.

It came after a double corkscrewing run by Barrett which pushed play into the Crusaders 22m area. When the ball was cleared Aso in midfield floated his way across the defence and fed Umaga-Jensen whose strength got him over the line in the corner. However, he took a blow to the head and left the field. But not before seeing Barrett land a fine sideline conversion.

From the five-metre scrum, the Crusaders mounted their traditional forward pressure and after three assaults at the line it was replacement lock Quinten Strange who got the try.

Again the response was led by Mo’unga again when he created the break and flung the long pass which was taken by a flying Reece who scored out wide, but the Crusaders were still two points short when the conversion attempted drifted just wide.

The referee was: James Doleman