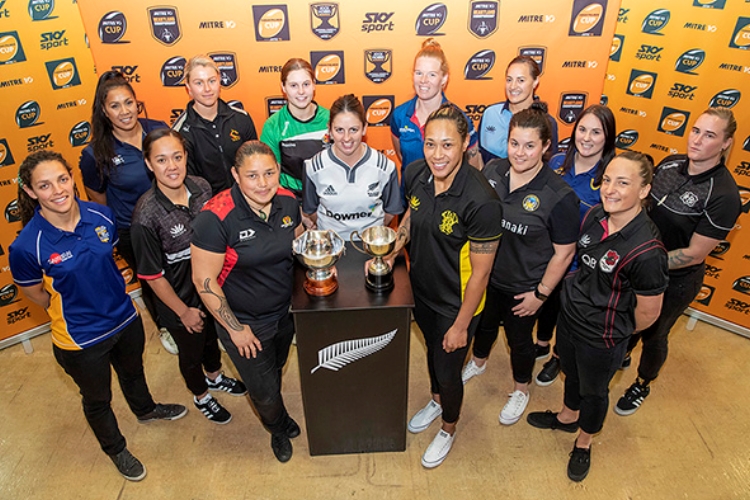 New Zealand’s premier women’s rugby competition kicks off this weekend with the 2020 edition of the Farah Palmer Cup expected to be the best yet. With some of the world’s leading exponents in both sevens and 15s preparing to don their provincial colours, the Farah Palmer Cup kicks off on Saturday 5 September and runs through to the end of October. North Pool teams are in action this weekend with Waikato hosting Northland, Counties Manukau coming up against North Harbour and Auckland traveling down country to face Taranaki.

New Zealand Rugby’s Head of Women’s Rugby Cate Sexton said players and teams were grateful to be in the position to get representative rugby underway. “There was some uncertainty earlier in the year with what this competition would look like and if it could run because of Covid-19 and the lockdown restrictions so it is great to now be in the position where kick off is only a few days away.

“It’s now in the hands of the teams to make the most of the opportunities in front of them and players to put their hand up for national selection with Olympics and Rugby World Cup 2021 around the corner,” said Sexton.

With the 2020 Black Ferns programme yet to be confirmed due to border restrictions, Sexton said the competition was crucial for women’s rugby in New Zealand.

“It’s an exciting competition that is a crucial part of our World Cup preparation but also something that will engage fans with quality women’s rugby across the country,” said Sexton.

Black Ferns Coach keeping close eye with Rugby World Cup 2021 fast approaching
Black Ferns Coach Glenn Moore said his coaching team enjoyed seeing the growth in the Farah Palmer Cup in 2019 and look forward to what is in store this season. “Last year it was exciting to see some real competition heating up between some of our more experienced players and the young, upcoming athletes vying for positions.

“With a full complement of Black Ferns available, the Black Ferns Sevens playing and some young talent emerging, this competition is a really important part of our preparation building towards World Cup next year.

Moore said there is a real sense of enthusiasm amongst players to get out there for the season. “The players are hungry to be out there playing rugby and we’re fortunate there will be a competition like this because we haven’t had any international opposition this year.”

Defending champions aiming for fourth consecutive title
Canterbury went through the 2019 competition unbeaten on the way to their third consecutive title. Along with the premiership victory they also hold the JJ Stewart Trophy which will be on the line against Otago, Wellington and Tasman this season.

With stalwart Steph Te Ohare-Fox sitting the 2020 season after the birth of her daughter, Coach Blair Baxter has named Alana Bremner to lead the side which features a number of new players. “There is plenty of energy and enthusiasm to learn and grow from both the Players and management group, which has put us in a great space. We are excited that we have been given the green light to play against Manawatu next weekend.’’

New talent added to referee pool
The Farah Palmer Cup is not only a proven pathway for players but referees as well. NZR National Referee Manager Bryce Lawrence said that Bay of Plenty’s Tiana Ngawati has impressed national selectors and promoted to the referee squad for the competition in 2020. Ngawati is a former Black Ferns Sevens player who also played 17 matches for the Auckland Storm.

“This season will see Tiana step up to the Farah Palmer Cup squad and she adds to our growing number of ex-players who are successfully transitioning into refereeing. Tiana has been developing well as a sevens referee and we’re looking forward to seeing how she takes this opportunity,” said Lawrence.

Law interpretations, which were a focus of the referees during Investec Super Rugby Aotearoa, will also be in play for the Farah Palmer Cup. “We’re really excited by this group of referees and they are looking forward to carrying on the good work started in Investec Super Rugby Aotearoa around the breakdown, offside lines and set pieces. No doubt we will see some great rugby as a result, said Lawrence”.

The trial innovations are designed to make the game more exciting for fans and players alike and see the golden point tie breaker and the ability for teams to replace players following a red card. If a match is tied after 80 minutes of regular time, the result will be decided by golden point.

The first team to score – by drop goal, penalty kick, or try – during a 10-minute period of extra time will take the win and earn four competition points. Players who receive a red card can be replaced with another player 20 minutes after they are sent from the field. The sent-off player cannot return to the field.

–      Hawke’s Bay’s Emma Jensen is the competition’s most capped player with 120 matches, she is heading into her 18th season of domestic rugby

–      Canterbury halfback Kendra Cocksedge has the most points in the competition with 892 points. Last season, Otago first five-eighth Rosie Kelly top scored and was the only player to surpass 100 points, scoring 107 throughout the season

–      2020 will see the 40 year anniversary of the first provincial women’s game, played between Hawke’s Bay and Manawatu