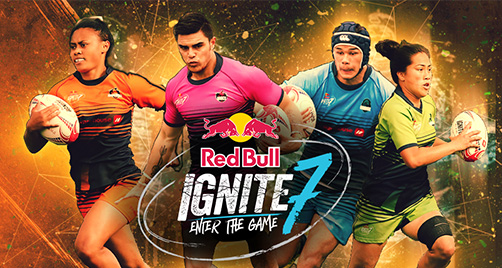 A live draft event on Monday 30 November will see eight captains, including Tim Mikkelson, Scott Curry and Sarah Hirini, pick their playing squads in a three-round draft, broadcast on SKY.

Teams will then assemble for one week in Tauranga before a two-day tournament at Blake Park on 5-6 December.

NZR High Performance Sevens Manager Tony Philp said the prospect of reimagining sevens in such a unique event was exciting for all involved.

“The opportunity to evolve the Red Bull Ignite7 concept to include our contracted players alongside the next generation of stars is new for us. The proposition of senior players being charged with picking their teams means we have something completely different on our hands.

“The other element of this which is also really exciting is it will grow our leaders as they will have to think about how to build an environment as their team prepares to perform.

“With the talent that is out there we expect the standard of this tournament to be right up there with what you see on the international stage,” said Philp.

“It’s been a long time since our last tournament so it’s good to have a focus and something to train towards. The concept is something a bit different, there will be some good banter when it comes to the draft,” said Mikkelson.

Talent identification to confirm the wider playing group is underway and expected to feature several Farah Palmer Cup and Mitre 10 Cup players. All players will be given training support in the lead up to the tournament before assembly in December.

This will be the first sevens tournament for the World Series-winning All Black Sevens and Black Ferns Sevens since the beginning of 2020 and kick starts the playing schedule in the lead up to the 2021 Tokyo Olympics.

The teams are hopeful for some Oceania based tournaments at the start of 2021 before the World Series is re-instated.

CENTRAL SEVENS IN LEVIN THIS SATURDAY