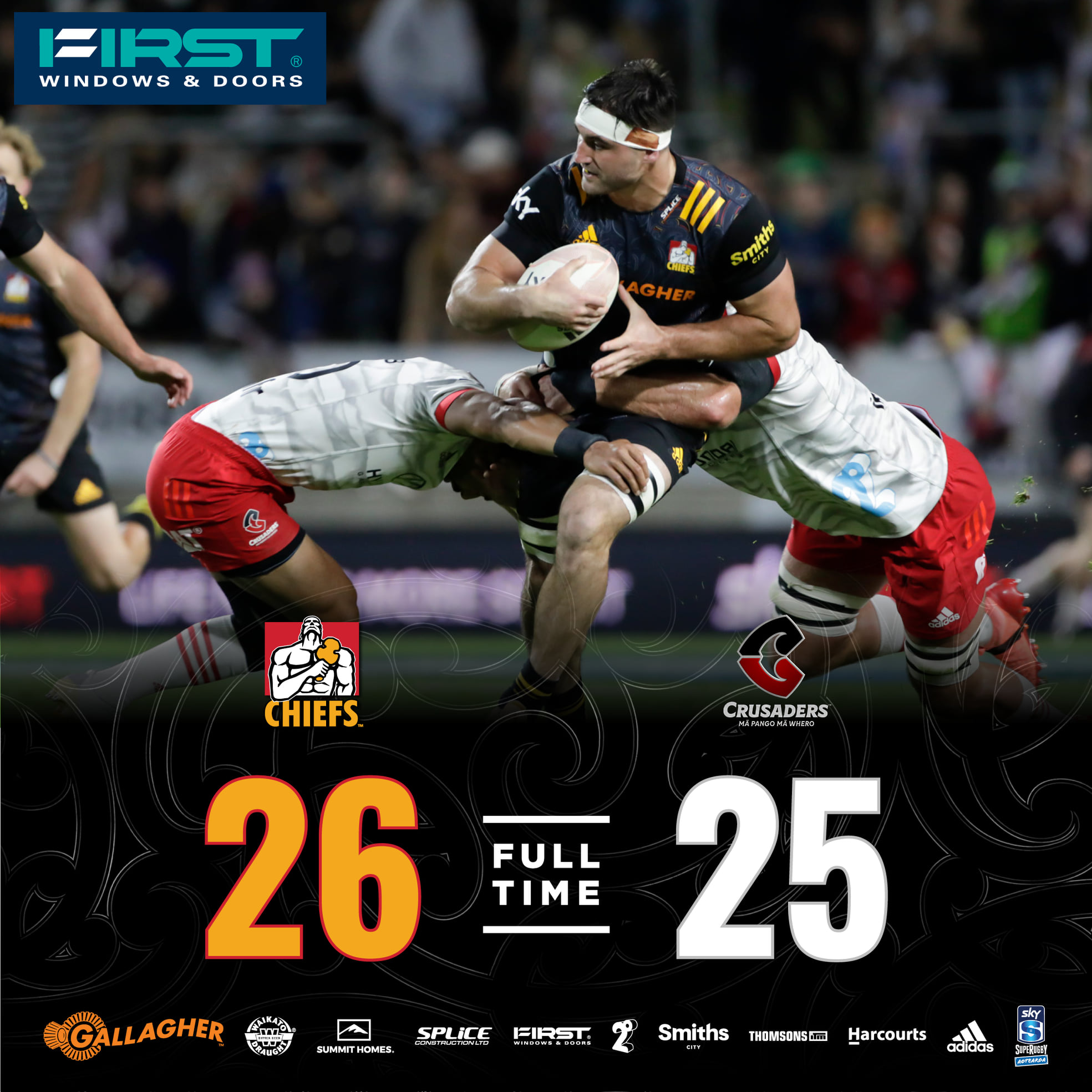 Spread the word: the Chiefs are officially back in business. After losing 11 games on the trot, they now stand as genuine Sky Super Rugby Aotearoa title contenders after beating the Crusaders 26-25 at FMG Stadium Waikato.

In a wildly entertaining game in front of a bumper 18,500 crowd that featured five lead changes, the Chiefs had standouts across the park. They got home off the back of two very well worked tries to Lachlan Boshier and Jonah Lowe, but it was the steady boot of Damian McKenzie that proved to be the crucial factor. After the Crusaders made an ominous start when Leicester Fainga’anuku scored after 7 minutes, the home side rallied, and McKenzie slotted three penalties in a row to give the Chiefs the lead.

However, their dominance only lasted a couple of minutes after the last penalty, when a bit of Richie Mo’unga brilliance put Scott Barrett in a big gap. The All Black lock found Will Jordan outside to score in the corner, and the defending champions went into the break with a 17-9 lead.

Boshier muscled over after an Alex Nankivell break put the Chiefs into the 22, which was just reward for a commanding return from injury for the openside flanker. Codie Taylor then came off the bench to put the Crusaders up by six, but Mo’unga uncharacteristically clanked the easy conversion into the post. That would prove to be very costly, as Lowe squeezed into the corner and McKenzie slammed home the sideline kick to bring the Chiefs within two.

The final 10 minutes was dramatic as the Chiefs were roared home by the big crowd, who hit their highest volume of the night when their side was awarded a penalty in the 77th minute. McKenzie nervelessly slotted the kick from 30 metres out to give them the lead, but the Chiefs had to withstand a late Crusaders raid into the 22 to set Mo’unga up for a drop goal attempt. Lock Naitoa Ah Kuoi was having none of it, getting in and securing a turnover that ultimately won the game for the Chiefs.

Boshier and loose forward partner Luke Jacobson were outstanding, with both making serious claims for All Black call ups later this season.

This is a huge result for the Chiefs, who will be brimming with confidence when they welcome the Hurricanes to Hamilton next Friday. The Crusaders face the Blues in Christchurch, who will be hurting after their loss to the Highlanders on Friday night.