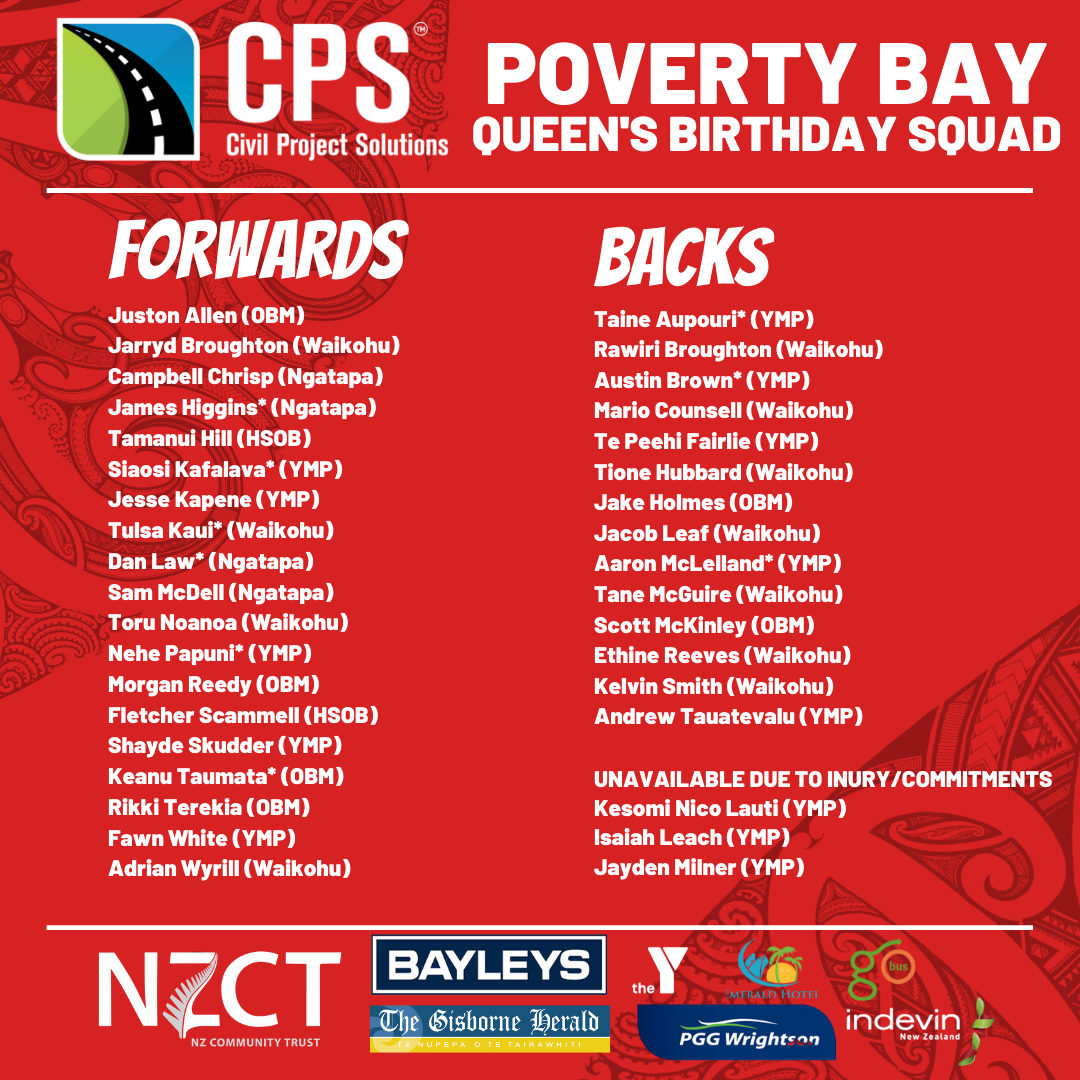 On behalf of Poverty Bay Rugby, I am proud to announce our Civil Project Solutions Heartland Squad for the upcoming Queen’s Birthday clash against Ngati Porou East Coast.
Heartland co coaches Miah Nikora and Tom Cairns said it’s great to have our first squad for 2021 picked.

“The player depth in our region is strong at the moment, and there was a lot of deliberating before we settled on the final squad.

“Naturally there will be some disappointed players, but they still have the opportunity through club rugby to push for the Heartland championship squad later in the season. We have an exciting group of players, with some younger guys being given an opportunity to develop at representative level.

“The squad is bigger than initial plans but with a few guys carrying niggles we’re in a fortunate position to call on the depth of players to cover.

“We look forward to getting things rolling this Wednesday in preparation for what will be a massive occasion against the Coast Queens birthday weekend,” said the co coaches.

The squad will have just three weeks to prepare for the annual Queen’s Birthday fixture against the Coast. This year’s game is incredibly significant as Ngati Porou East Coast Rugby celebrates its 100 Year Centenary over the weekend.

It’s a privilege to be part of an historic milestone for Ngati Porou East Coast Rugby and we’re all looking forward to a great weekend.

While the rivalry on the field is unmatched in provincial rugby, we’re all whanau off it and this special bond we share being so strongly connected makes the Centenary celebrations special for all of us.

We’re proud of our neighbours and their incredible achievements over the past 100 years. We’re proud to be part of such a wonderful occasion and can’t wait for a great game and a great celebration.

I want to acknowledge all the hard work that’s gone into this season – from our club volunteers, coaches, trainers, supporters, players and their whanau. Selection in the squad is great reward for everyone’s effort.

Congratulations to those selected. I know you will represent us well. To those that have missed out – keep your head up and keep fighting. There’s still plenty of time to put your hand up for the Heartland Championship selection as you work your way through the club season.

The squad will assemble at the Referees’ Rooms at Rugby Park this Wednesday 19th May at 6pm.
Ngā mihi,
Josh Willoughby
Chief Executive

ADDITIONAL INFO
Club representation in the squad of 33