Skip to content
You are here
Home > RugbyHeartland News > Have you played any of these classic rugby video games?

Have you played any of these classic rugby video games?

Away from watching the All Blacks in action and following the latest news and views from the rugby world, fans of the sport have also been known to sample the odd rugby-themed video game over the years. Playing games not only provides an entertaining escape for people, but it enables fans of specific sports to play as their heroes and enjoy some action-packed sports gaming.

Other popular sports, such as soccer, tend to pull in massive global audiences through releases like FIFA 22, but a number of rugby-themed titles have thrived in recent times also. For instance, Rugby 22 is a commonly utilised option for many fans who own a sophisticated console device these days. Likewise, mobile gamers are accessing popular products such as Rugby Star at Playerz Casino in 2022 also. The options certainly don’t end there either, although there is a strong argument to suggest that the classic products of old are some of the best rugby games ever made. In fact, some past releases are truly iconic in this particular gaming category and many older rugby fans grew up with them. Let’s take a look at some of the games below.

Released in 1997, Jonah Lomu Rugby is about as classic as it gets. Regarded by many as being one of the best all-round sports titles, let alone rugby games, Jonah Lomu Rugby offered players both smooth gameplay and easy controls on the whole. The game’s commentators were particularly memorable also, with both Bill McLaren and Bill Beaumont coming out with some hilarious lines on occasions. The kicking in the game was hard to master, though, but overall, Jonah Lomu Rugby will live long in the memories of many more senior rugby fans.

A game developed by HB Studios and released by EA Vancouver, Rugby 06 is part of the Rugby series of games by EA Sports. Available to play on PS2, Xbox and PC, the game was an easy-to-grasp simulation that pulled in fans away from rugby due to its simple rules and different play styles. You could feature in tournaments, master your skills in tutorial mode, and aim to advance through various levels in an attempt to become the ultimate force in rugby. 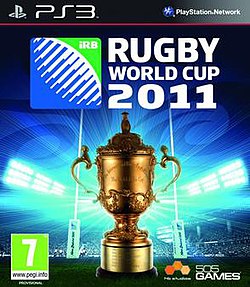 As the title of the game suggests, this 2011 release featured a variety of game modes and provided fans of the sport with some solid entertainment. Rugby World Cup 2011 certainly isn’t the most detailed of releases and the graphics could have been better overall, but it offered gamers a realistic rugby experience as they enjoyed playing with world-famous stars from teams like the All Blacks.

Available to play on the Mega Drive, International Rugby Challenge is one of the original rugby games and served up a strong dose of entertainment to rugby fans at the time of its release. The classic SEGA sounds also made it amazing to play, with players all around the world enjoying its undoubted quality. Of course, International Rugby Challenge wouldn’t stand up today, but it helped shape many of the popular rugby games we see in the modern world.

Ever fancied yourself as a bit of rugby coach? Well, if so, then getting your hands on Rugby Union Team Manager 2017 is highly recommended. Tasking you with learning important details around the likes of fitness, training, nutrition and tactics, the depth of this particular release is intriguing. The game’s graphics aren’t the most high-quality you’ll ever see but it isn’t necessarily an issue given the game’s management aspect.