The contenders for this year’s Meads Cup and Lochore Cup have been confirmed following the last round of the regular season.

Buller retained their perfect season beating Waiararapa Bust 49-36 to claim top of the competition leader board.

Mid Canterbury edged out neighbours South Canterbury to claim a berth in the Meads Cup semifinal next week.

Mid Canterbury and Horowhenua finished third equal on the points table, and with the teams not meeting this season, the tie breaker came down to points differential giving the South Islanders the edge (+119) over the North Islanders (+48)

The same tie break protocol was used to wedge apart Wanganui and Thames Valley who were deadlocked on 17 points for the fourth ranked Lochore Cup semifinal spot.  The two teams have not played each other this season, so again the points differential made the difference – this time only by a slither as Wanganui (+9) edged out Thames Valley (+4).

The semifinal fixtures (venues and kick-off times to be confirmed) with the hosting team listed first, have been confirmed as below:

The Final “Official” Table was : 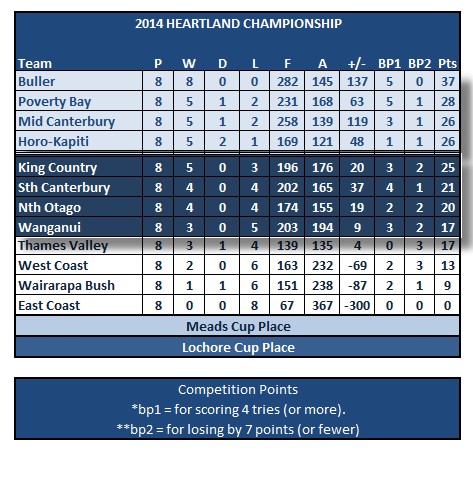