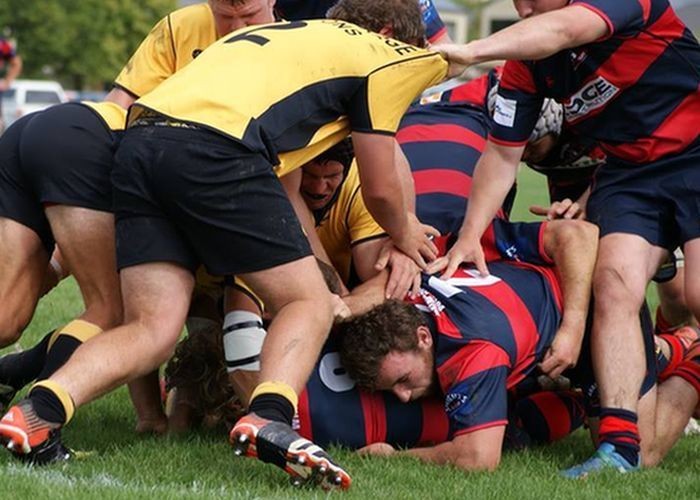 Above: Action from Arrowtown’s 12-5 win over Upper Clutha in the opening round of Central Otago Rugby. Photo credit: Arrowtown Facebook

Waikato and Counties Manukau started week two of their Premier competitions on Saturday, while competitions in Northland, Manawatu, Central Otago and King Country kicked off and the pre-season Auckland Waka Nathan Cup got underway.

Melville enjoyed a comfortable 46-14 win over Matamata Sports, Hautapu defeated Fraser Tech 28-17 and Otorohanga beat defending champions Hamilton Marist 36-24 after racing to a big lead. In other matches, Te Awamutu Sports beat Morrinsville Sports 30-17 and Hamilton Old Boys bounced back from a first round defeat to Hautapu to beat University 32-20.

Counties Manukau defending champions Bombay opened their account for 2016 with a 31-20 second round win over Karaka in a rematch of last year’s championship final.

The team that beat Bombay last week, Onewhero, grabbed their second victory in accounting for Manurewa 41-27. High scoring characterised the other matches, Ardmore Marist ran in 12 tries, including a hat-trick to Luteru Laulala, in their 74-15 win over Te Kawhata, Waiuku blanked Drury 36-0, Pukekohe, with a hat-trick to Mathew Berry, beat Papakura 60-8 and Patumahoe crossed for 11 tries in beating Weymouth 69-6.

There was talk in the local press of two-time defending champions College Old Boys perhaps taking a while to find their feet in 2016, but their quest for a three-peat of Manawatu club rugby titles kicked off with a 50-point win over Freyberg. College Old Boys beat Freyberg 62-12, six individual try-scorers running in tries.

Two of the other three matches saw some hot scoring on a day when temperatures hit the high 20s in Palmerston North. Varsity travelled to Feilding and came away with a 40-7 win, whilst Te Kawau marched to a first up 43-22 win over Linton. In the other match of the day, Old Boys Marist defeated Feilding Old Boys 21-12.

Kia Toa had the bye in the first round, but will be into it in earnest of Easter with rounds two and three being played on Good Friday and Easter Monday respectively.

The opening round feature match of the Northland competition was a thriller. Wellsford beat Mid Northern 29-12 in last year’s Southern Districts final, but on opening day 2016 Mid Northern turned the tables on Wellsford to win their replay 42-40.

There was plenty of hot scoring in King Country club rugby on Saturday, with Taupo Sports A beating Taupo Sports B 78-0, Waitomo beating Tauramanui Districts 49-10, Kio Kio holding Bush to 60-0, Taupo United beating Piopio 43-28, and the Tauramanui Eels taking a 39-13 win over Tongariro.

The Nelson and Marlborough Tasman sub-unions kicked off their individual competition 2016 seasons on Saturday.

In Nelson, defending champions Wanderers 33-22 opened their account with a 33-22 win over Kahurangi, while Marist beat Waimea Old Boys 29-7 and Nelson beat Stoke 62-0.

The two sub-unions contest their own competitions for the next several weeks, before combining to play for the Tasman Trophy.

The Waka Nathan Cup and Pollard Cup semi-finals and finals are over the next two weekends, ahead of the start of the season proper on 16 April.

Most other New Zealand club competitions get underway over Easter, with matches played around the country on Good Friday, Easter Saturday and Easter Monday.