Skip to content
You are here
Home > RugbyHeartland News > Welcome to the big leagues: Whanganui rookies step up to Manawatu Evergreens 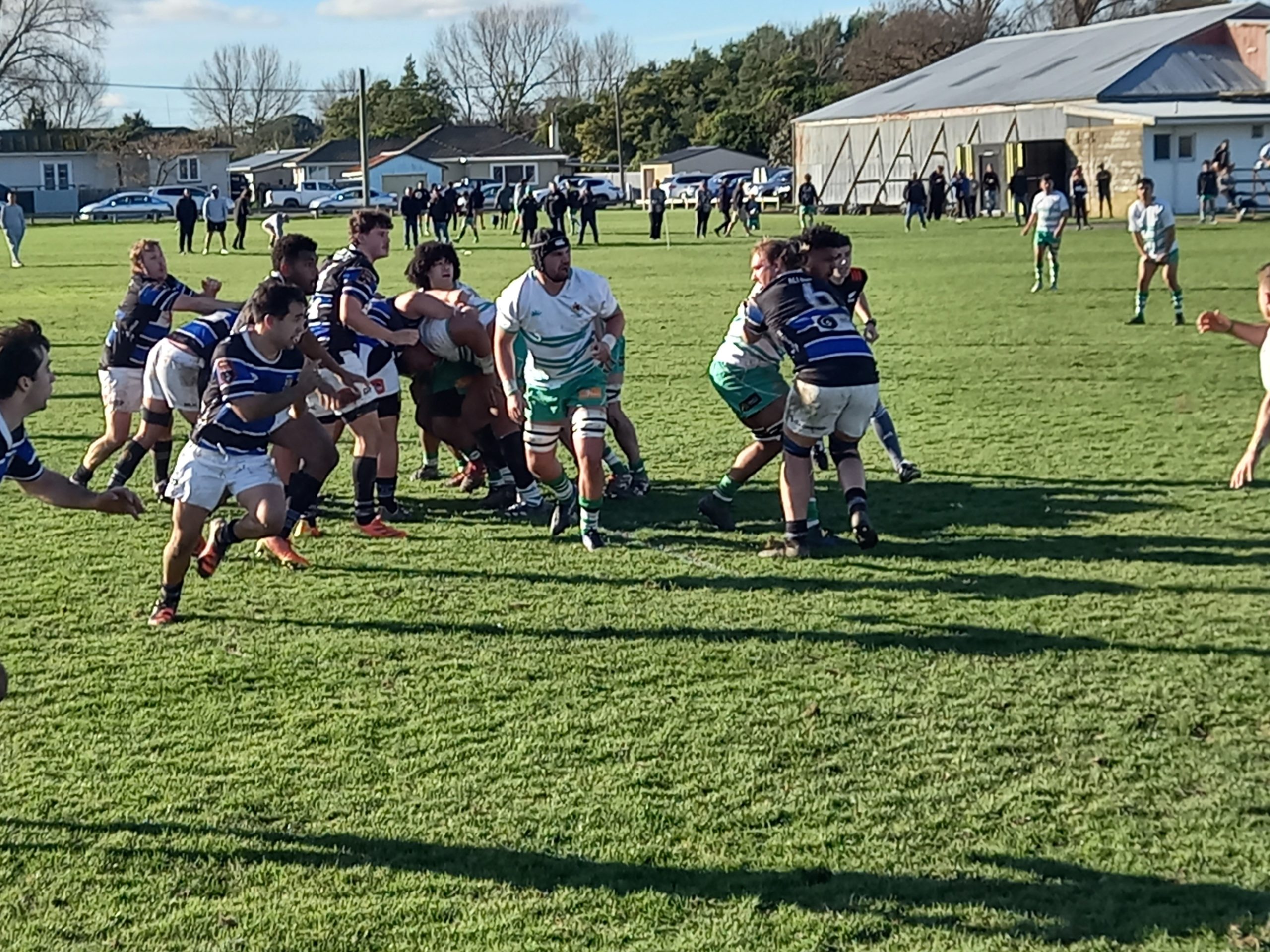 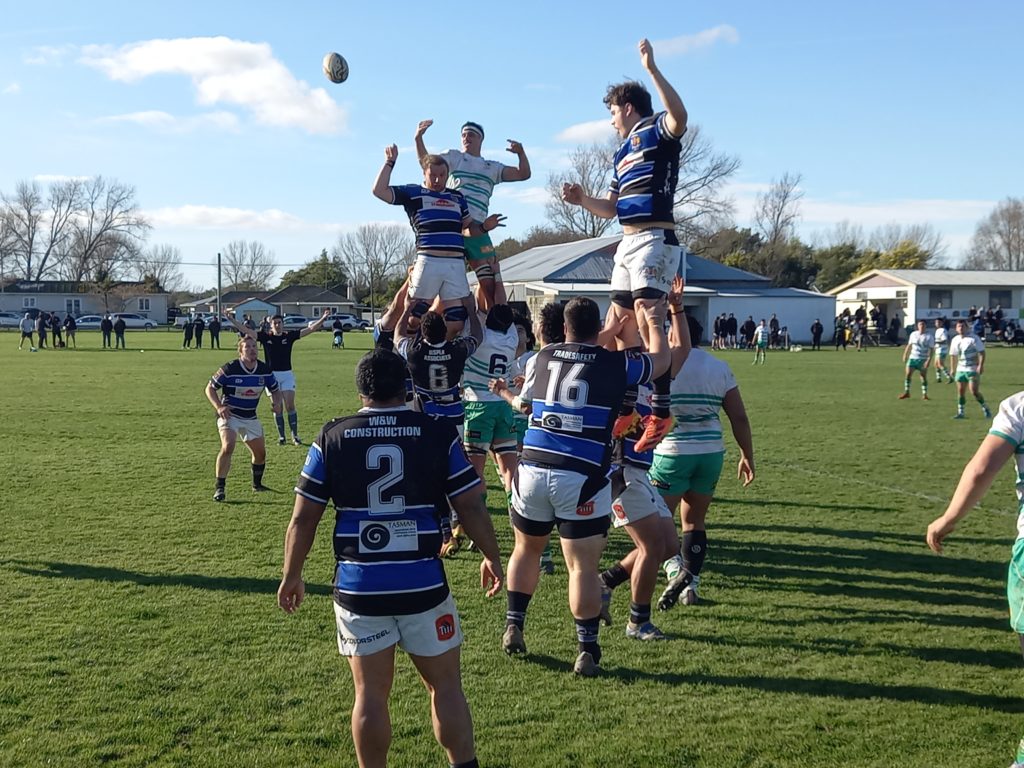 It was a baptism in mud for Steelform Whanganui’s younger squad members at Feilding’s windy Johnston Park, as the extended preseason kicked off with a 38-15 loss to Manawatu Evergreens on Saturday.

The four-quarters game was not originally on the schedule but added at the expense of having a Whanganui trial game, which head coach Jason Hamlin felt was unnecessary after such a small Tasman Tanning Premier club season, having seen all the players in squad contention multiple times.

Covid, injury and unavailability had taken away several senior squad members – Whanganui going without their usual locks or halfbacks – but that just opened up opportunities for a couple of second-tier players to step in as well as the three apprentice players to get extended game time.

Ironically, despite the slightly blown-out scoreline in the first half of 26-5, Whanganui actually played with better structure during this period – it was just that the Evergreens players, who likewise had only a couple of training sessions together, were physically just that little bit bigger, stronger and faster.

They hit Whanganui fast and hard on their carries and looked work wide and use their kicking advantage with the wind – centre Chance Malu and double try-scoring No8 Jekope Kitau impressive, while second-five Stewart Cruden did well with the boot, as did expat Whanganui first-five Kody Edwards.

A couple of broken tackles and a defensive lapse and the home side were through to nab four tries, the first to another expat in fullback Adam Boult.

The second half, with Whanganui having the wind, turned into a more scrappy affair, plenty of lost ball from both sides as they ran on their deep benches and switched players around positions – notable for the Evergreens that ex-Collegiate lad Waqa Nalaga scored one of second stanza tries, while 2020 Whanganui player Logan Henry got to run the cutter.

However, their lineout struggled whereas Whanganui’s – which had apprentice player Mason Johnson, ring-in Matt Ashworth, and No8 Semi Vodosese as the jumpers – showed fairly good co-ordination.

Leaders underneath skipper Dane Whale, who covered fullback, were in short supply, but without the likes of Jamie Hughes, Josh Lane and Peter-Travis Hay-Horton, Whale’s brother Ben played the full game covering both blindside and openside, giving a typically strong effort.

Two of Whanganui’s tries came from their apprentices – Johnson and speedy winger Jack O’Leary, while reserve hooker Jack Yarrall had a very busy second half, and reserve fullback Peceli Malanicagi looked a handful out wide.

Up front, the side welcomed former Rangitikei schoolboy Adam Coll as import prop, having been a College Old Boys RFC regular who lost much of his 2022 MRU club season to injury, thus not being in contention for local rep honours. Props Keightley Watson and Tai Pulemagafa did well in their first hit outs for the Whanganui senior team, the former being denied a try by just inches in the second half, while apprentice forward Kohlt Coveny received a warm reception from the travelling supporters when he jogged on, covering flanker instead of his usual hooker role.

Without Timoci Seruwalu in the midfield, while Brook Tremayne ran the Whanganui cutter for the first time, partnering with newcomer Caleb Gray and try-scorer Kahl Elers-Green in the halves, there was not always the fluidity through the backline which can only come with practice – the offload which is delivered half second too early or too late, the mistimed cut out pass that goes forward or behind the runners.

“We talked about the pace of the game, what [Evergreens] were going to bring, how we could absorb it, and I thought, bar a couple of things, we did that really well,” said Hamlin.

“In the second half, we probably went one-off a little bit too much, but we were able to get over the game line so we got away with it.

“But it wasn’t really what we were after. But we saw on the last try [Elers-Green], that’s the structure we want to see.

“The work-on for us is maintaining a bit of composure, keeping enough ball, and when we’ve got the ball and being able to maintain possession and pressure, they looked just like us running backwards.

“The things we asked for around the attitude and the effort areas, was there.

“Does their execution have to be better? Yeah. But we expected that going in.”

Whanganui had been eager to find wide gaps in the final quarter, but the desperation to get out there led to mistakes against Evergreen’s cover tackling.

Hamlin welcomed Coll, although accepting he was a bit short of a run.

“This Covid environment, dropping players in week in and week out, we’re going to need more props anyway, every game.

“It might be I’m carrying five to six props, which is what we had today.”

Hamlin praised Ashworth and Johnson for stepping up, while he thought O’Leary as outstanding on the wing after a club campaign in the midfield.

Boult opened the scoring when he ran off a quick ruck recycle beside the posts after multiple carries from their big forwards, Cruden converting.

A penalty saw the home side use the wind to kick right into the pocket, and although Whanganui tackling stopped flanker Mike Halatuituia scoring, Kitou went the other side and busted the line to dive across for 14-0. Whanganui’s forwards were providing each other short offloads in the face of physical hits on the carry, and it worked out as hooker Roman Tutauha fed prop Renato Tikiosolomone, who offloaded to Johnson to show great skill to dive through his tackler and plant the ball inside the corner flag, league-style.

Evergreens extended their lead after quarter time as Boult slid through a half gap and found speedy prop Malakai Hala-Ngatai, who stepped through a cover tackle to score.

They then extended the score beyond Whanganui just before halftime, as a gap was left off the ruck for Malu to dash through and put Kitou over in the corner.

The Evergreens had a bit of luck on their fifth try after halftime as they spread the ball wide but lost it, only for Nalaga to swoop through and dash over beside the posts.

Whanganui began to put structure together as Malanicagi went for a couple of runs, when Ben Whale set up centre Kameli Kuruyabaki to run free, finding Yarrall with him, who offloaded to Ashworth who in turn put O’Leary over clean in the corner.

Play remained in the Evergreens half for some time, both sides making mistakes with scrums aplenty.

Finally, Vodosese went off the back of an attacking scrum to carry just short of the line, and after several forwards had a crack at barging over, the defence finally offered a gap for Elers-Green to dive through, Whale taking over the goalkicking from Tremayne but still unable to add the extras.

Evergreens replied quickly as Henry went for a dart off a scrum in Whanganui’s half, and then Malu stepped through multiple dive tackles to run towards the posts, with the cover defenders deflecting his pass, but unable to stop reserve forward Nasser Tato securing it to dive over.