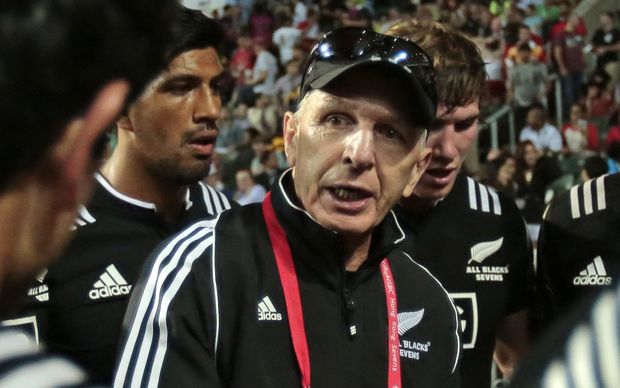 New Zealand Rugby has paid tribute to legendary sevens coach Sir Gordon Tietjens following his decision not to seek a new contract after 22 years at the helm of the All Black Sevens team.

He was inducted into the World Rugby Hall of Fame in 2012 and knighted for his contribution to rugby 12 months later. Many great All Blacks have emerged from the teams he has coached including Jonah Lomu, Christian Cullen, Ben Smith and Beauden Barrett.

New Zealand Rugby Chief Executive Steve Tew said Sir Gordon had carved out a unique place in New Zealand rugby history. “Titch has guided the All Blacks Sevens team through more than 100 international tournaments, a remarkable achievement that may never be equalled.

“The number of former sevens players who’ve gone on to become All Blacks speaks for itself and demonstrates the incredible impact that Titch has had on our game. To put the length of his career into context, when he first began in this role rugby was an amateur game, Jim Bolger was Prime Minister and several members of the current All Blacks Sevens team hadn’t even been born.

“New Zealand Rugby and our country owe him a debt of gratitude for the legacy he’s left behind and all the memories and careers he’s shaped along the way.”

Sir Gordon said he had taken some time to think about his options following the recent Olympic campaign and felt the time was right for a fresh challenge.

“I love the sevens game and I’m immensely proud of what I’ve achieved and what all our players have been able to achieve in my time with the team,” he said.

“We were all incredibly disappointed with our results in Rio, but we have to acknowledge just how far sevens rugby has come. It’s become intensely competitive and the Olympics proved just how tough it is to win at this level these days. I’m sure lessons will be learnt and I wish my successor all the best for the Sevens Series ahead and for the Tokyo Olympic Games.

“I’ve loved my time in sevens and I aim to still be involved in some capacity. I’m now working through what those next steps are.

“I’m grateful to New Zealand Rugby for the support they’ve given me over the years. I want to especially acknowledge the management team and all the players who have contributed to the success of New Zealand sevens during the last 22 years. I have so many great memories from what’s been an amazing time with the team.”

The process to recruit a new coach of the All Blacks Sevens team will get underway immediately with Sir Gordon’s successor expected to take the team into the new season which kicks off in Dubai on 2 December.

Background Sir Gordon Tietjens KNZM
Sir Gordon Tietjens has coached the All Blacks Sevens at more than 100 international sevens tournaments since taking over the side in 1994. In 2012 he received the rare honour of being inducted into the World Rugby Hall of Fame, unusual for a still serving coach and the first sevens coach to receive such an honour. He was also knighted in 2013 for services to sport.