The heavyweights are showing out after five rounds of the Mitre 10 Heartland competition with Wanganui continuing to set the pace with a 52-30 win over Poverty Bay in Gisborne on Saturday.

Right wing Te Rangatira Waitokia shot to the top of the try scoring list in the competition when scoring four times for Wanganui, giving him nine tries for the season.

Wanganui have 24 points with South Canterbury on their heels on 22 points after their 62-16 win over Thames Valley.

Buller maintained their hold on third place with 21 points as a result of their 54-22 win over East Coast. Setefano Sauqaqa and Anthony Tailua crossed for three tries each in Buller’s seven-try haul and with six conversions James Lash retained the lead on the individual points scorers table with 84 points.

Wairarapa Bush knocked North Otago out of fourth and down to seventh when winning 38-22 in Oamaru. With their bonus point try advantage, Wairarapa Bush are on 19 points while Mid Canterbury’s 34-22 win over West Coast saw them take fifth place on 17 points.

King Country, with a 42-18 bonus try win over Horowhenua Kapiti moved to 16 points, one ahead of North Otago. King Country and North Otago are due to meet in the next round in Te Kuiti.

Results from Saturday were: 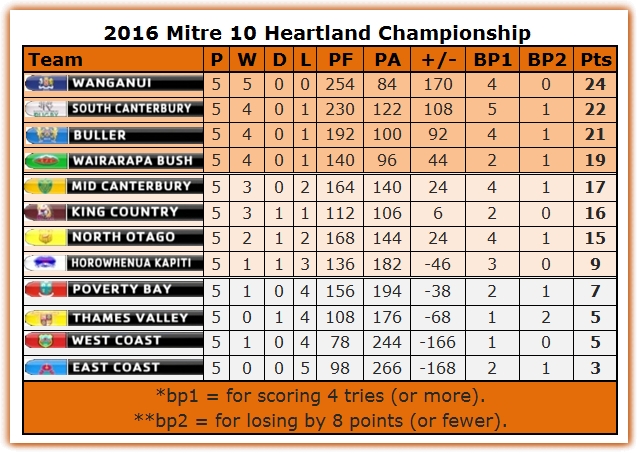