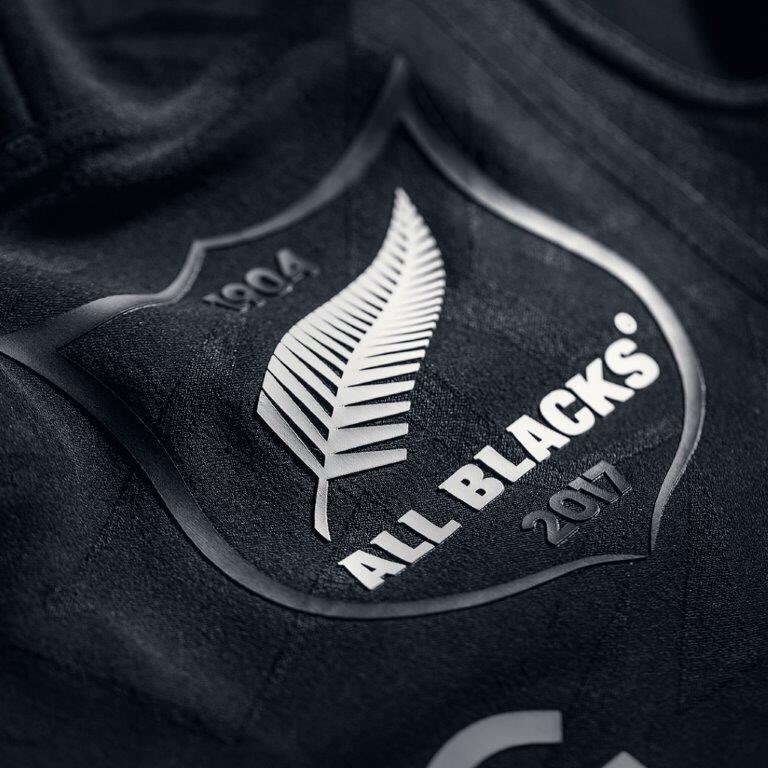 A dynamic new graphic design and a special crest marking the legacy of the All Blacks and the British & Irish Lions are the key features of the stunning new jersey the All Blacks will wear when they take on the Lions in the three-Test series.

The new jersey proudly pays homage to the 113-year history between the British & Irish Lions and the All Blacks and features a new one-off designed All Blacks crest, inspired by that worn by the All Blacks in 1930. It features  the iconic silver fern All Blacks logo and the years ‘1904’ and ‘2017’ inscribed above and below.

The special All Blacks crest, which has been revealed online, will only be on the jersey for the three DHL New Zealand Lions Series Tests.  The full jersey will be unveiled on Wednesday.

The All Blacks and the touring Lions first played each other on 13 August 1904 at Athletic Park in Wellington, in what was also the first Test match the All Blacks ever played in New Zealand.  On a fine Wellington day in front of 20,000 fans, the All Blacks beat their British rivals 9-3, setting the stage for an impressive rugby legacy.

Simon Cartwright, Senior Director at adidas Rugby, said: “We started thinking about this design early last year as we know how important this event is for not just the All Blacks but for New Zealand Rugby. We agreed that it needed to be simple and respectful for such a momentous occasion and we feel we’ve delivered that.  Senior All Blacks including captain Kieran Read, have also embraced the new design, which is fantastic.”

“There’s always a lot of pride in the All Blacks jersey, not only from the All Blacks but from New Zealand rugby fans. We think that the different elements of this jersey – the iconic print and the Lions Series crest – express both that pride and the importance of the legacy that these players are continuing,” added Cartwright.

Kieran Read said: “It’s always an honour to pull on the All Blacks jersey but an even greater honour to have a special edition jersey for what will be a pretty cool occasion for all of us.  I love the simplicity of the design and the nod to the past in the crest design. This Series will be adding to the legacy of our team, and that’s something that is important not just to me, but everyone who has gone before us.”

The special edition jersey will be available to fans instore from Wednesday with a special fan event being held at the adidas store in Newmarket, Auckland.  All fans are invited to come down to the store to meet a group of All Blacks players.

Fans can show their ultimate support by purchasing from the special edition All Blacks range.

The new special edition jersey is available in two options: the Supporters’ Jersey (RRP $120) and the traditional Replica Jersey (RRP $150).

The special edition tour jerseys will be stocked at all adidas stores, major sporting goods retailers, rugby retailers throughout the world, and online at www.adidas.com.