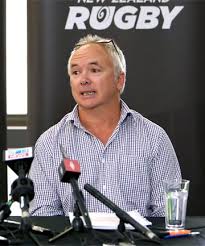 The 56-year-old Head of Rugby has resigned after 17 years at NZR and will mark his last day at the organisation on 29 March 2018.

“This has been something in the back of my mind for some time now, and I have finally decided that the time is right for me to look for something new.

“I am excited about what might be around the corner, I love building, developing and leading teams but for now, I’m looking forward to supporting my team mates over the next few weeks before enjoying Easter as a fan and not as a ‘fish head’ as I have done for so long.

“I feel privileged to have been involved in so many different parts of the game – from Test and tour operations, to leading during rugby’s transition through to the modern era of rugby.  I have been able to travel overseas to support incredibly talented young people in the Under 20s, the Black Ferns, Maori All Blacks and the Sevens teams.

“But many of the moments that stand out as being special are the times I’ve witnessed how rugby can be a powerful connector for communities – from Rippa rugby tournaments, to Heartland Championship finals to proudly marching in the Pride Parade.”

“Sos has been a very highly valued and adored member of the NZR family for a long time.

“He has been with NZR since 2001, and is one of our senior leaders who helped to refocus and rebuild NZR after the hosting rights were lost in 2002, including taking on the acting CE role at times. He was pivotal in professionalising our rugby operations, including the 2005 Lions Series, which helped set the scene for our successful bid to host the 2011 Rugby World Cup.

“The Rugby team has thrived and excelled under his leadership and he has led four game-changing collective negotiations with his team.

“Long before Respect and Inclusion became a strategic priority for all of NZR, Sos was a pioneer in this area for our organisation.

“Sos is deeply passionate, caring and generous with his ideas and knowledge for the good of rugby. He has made an incredible contribution to our game from grassroots to professional, and has been a key driver in the growth of the women’s game.

“We wish Sos and his family, the very best for the future,” Tew said.