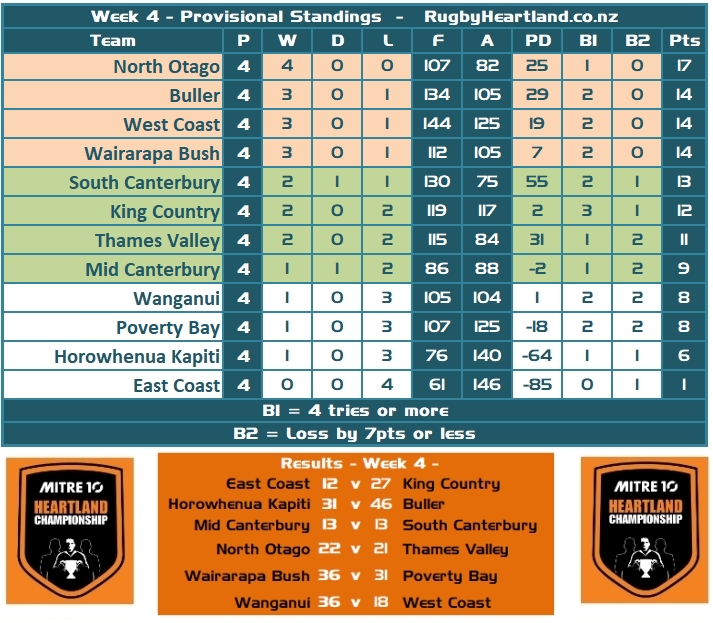 By: Jared Smith Jared Smith is sports editor of the Whanganui Chronicle jared.smith@whanganuichronicle.co.nz

North Otago continues to pull out clutch victories in the dying moments to keep their undefeated streak going in the Mitre 10 Heartland Championship while another couple of Meads Cup contenders fell out of the top four on Saturday.

Back in Oamaru after taking their first home game to Dunedin’s Forsyth Barr Stadium, proficient goal-kicking halfback Robbie Smith was the hero for the home side, as his fifth penalty right on full-time snatched a dramatic 22-21 win over defending champions Thames Valley.

The home side was out-scored three converted tries to one, as Thames Valley first-five Reece Broughton had an excellent day himself with two tries and all the conversions.

Their Bay of Plenty import second five Danny Kayes also scored his third try in two games, as Thames Valley would pressure the home side to snatch possession in scoring two of their five-pointers.

Yet Smith kept his cool and would add two more three pointers in the second half to chip away at the Waikato country union’s narrow lead.

The halfback booted them into the early lead before Thames Valley’s first converted try, which received a strong reply as hooker and captain Sam Sturgess slid over in the corner – Smith converting from the sideline for 10-7.

Another penalty in front extended that lead, before the home side blinked as Thames Valley snatched an intercept to run back 50m and score under the posts to regain the advantage 14-13.

Smith’s third penalty was the final say before the break to again put their noses in front, but then it was a clearing kick being charged down that let the visitors gratefully capitalize for 21-16.

Getting back on attack, North Otago earned another penalty in front and Smith made no mistake, and then with time up on the clock, North Otago were on the attack and whistle blew for them just past the 30m mark on the left side angle to the posts.

Smith’s forwards chased hard as he kicked it, only to immediately do a u-turn and join the other backs and the reserves bench in rushing over to mob their halfback as the ball sailed through the posts.

Their second narrow defeat saw Thames Valley fall from third spot to seventh, while North Otago are now the only unbeaten side at the halfway point of the round robin, as previous table leader West Coast closed out their streak with a 36-18 away loss to a 14-man Wanganui at Cooks Gardens.

Having done themselves no justice so far in 2019 with three straight losses, Wanganui’s odds appeared to have plummeted in the sixth minute when linchpin flanker Jamie Hughes was sent off for a high tackle.

The home side had previously opened the scoring when winger Tyler Rogers-Holden snuck down the blindside for a converted try, but being a man down, they were under pressure as West Coast centre Sean McClure added a penalty and then flanker Brad Tauwhare scored for the second time in two years against Wanganui, after the host’s attacking cross-kick back-fired.

However, led by centre Peni Nabainivalu, who brought eight years of passion from the Buller vs West Coast rivalry with him, Wanganui clawed their way back, as some good passes saw deceptively quick prop Raymond Salu run in for his second try in two games.

The game became 14 vs 14 briefly as West Coast fullback Jesse Pitman-Joass was sin-binned for deliberately knocking down a pass at the tryline, and Wanganui capitalised with Nabainivalu diving over after an attacking lineout.

McClure kicked a reply penalty on the halftime siren, the fourth straight game Wanganui have given up points of that final play.

While West Coast were eager to get on with it, staying on the field for the intermission, it was Wanganui who came out firing as halfback Lindsay Horrocks finished off a brilliant backline try started inside their own half.

After a couple of first-half kicking misses, first-five Dane Whale found his form going into a slight breeze with the conversion and then a penalty for a 29-13 lead.

West Coast, who were missing a handful of regulars from previous games, tried to spread the ball but made a series of costly handling errors, and Wanganui capitalised as a penalty lineout put them back on attack and reserve prop Kamipeli Latu burrowed his way over off the tryline ruck.

West Coast went searching for consolation points and got them when lock Sam Liebezeit scored his fourth try in three games.

Despite not getting any points, the Coasters still stayed in top playoff group, while Buller were big movers from fifth to second spot after travelling to Levin Domain and picking up a comfortable 46-31 win over Lochore Cup champions Horowhenua-Kapiti, who are now struggling.

Buller made a lightning start as No 8 Daniel Hytongue and second-five Iliesa Ravudra both scored within the first six minutes, each try converted by first-five James Lash, who then popped over a penalty for 17-0.

Horowhenua Kapiti would close the gap by raising ten points, but Buller scored again through fullback Robbie Malneek for 24-10, and then keep the pressure up with more tries before halftime at 34-10.

Ravudra would end up with a double in the match, while winger Petaia Saukuru scored for the second straight week.

New winger Mitieli Kalodigibeci would also dot down, as did NZ Heartland XV representative Jeff Lepa, as the score blew out to 41-10 after 55 minutes.

To their credit, Horowhenua Kapiti mounted a comeback and ran the ball, with their Wanganui import and Heartland XV rep Timoci Seruwalu among their tryscorers, to swiftly close the gap to 41-24 just seven minutes later.

However, Buller scored again with ten minutes remaining, before the home side had the final say with the last try of the shootout in the 75th minute.

The inter-island victory sets up a big clash next weekend with South Canterbury, who moved from third down to fifth as a result of a damp 13-all draw with neighbours Mid Canterbury at the Ashburton Showgrounds.

After both sides missed chances to score tries, the hosts opened the scoring with a 25th minute penalty through first-five Corey McKay.

South Canterbury camped on attack but errors and ruck penalties were costing them, until hooker Ben Hewitson made up for an earlier spill by diving into the corner, with halfback Willie Wright adding the sideline conversion for 7-3 at halftime.

Wright extended the advantage with a penalty after the resumption, but Mid Canterbury struck right back as captain and No 8 Jon Dampney followed up the drives by his pack to get his second try this year and lock it up at 10-all.

South Canterbury were then rocked by the double blow of losing first-five Miles Medlicott to the sin-bin for a lifting tackle above the horizontal, while McKay duly added the three points for 13-10.

However, Wright replied only five minutes later with a clutch kick from 42m out, which set up a pulsating final 15 minutes of play, including eight minutes of injury time.

Both Wright and McKay had the chance to be the hero – Wright missing a similar 45m kick, while after Mid Canterbury put a drop goal wide, McKay had a 37m chance with time up, yet pushed it left of the posts.

Just taking two points out of the derby clash, South Canterbury were leapfrogged by both Buller and Wairarapa Bush, as the latter held off a late charge by Poverty Bay to win 36-31 on the artificial turf in Masterton.

Since their away game upset of Thames Valley in Week 1, Poverty Bay have had three games in a row where they run up a high score but still narrowly lose.

The home side raced away to a 26-0 lead, which became 26-14 as the visitors scored converted tries on either side of halftime, inspired by the 50th game for their centre and try-scorer Ethine Reeves.

Another try had the home town faithful nervous at 26-21 in the 52nd minute, before first-five turned winger Tim Priest settled Wairarapa Bush down with a penalty one minute later.

Poverty Bay got a penalty of their own through reserve back Kelvin Smith to get back within range inside the final ten minutes, and then a pulsating conclusion, both team’s scored converted tries in the last 120 seconds of action.

It was another grand day for the Tufuga family as the second-five Ueta got a double to follow up his try last week, while captain and No 8 Kirk also crossed the line.

Flanker Brendon Campbell likewise dotted down for the second week in a row, while first-five Tipene Haira handed over the goal kicking to Priest but nonetheless got on the scorers sheet.

And King Country moved up one spot on the table, but not without being made to work for it by East Coast, who took their home game to a sunny Hatea a Rangi Domain in Tokomaru Bay, with the visitors getting up 27-12.

King Country seemed to have matters in hand as they led 14-0 at halftime, getting their first try when centre Tana Tuakaraina scored off a kind bounce from an attacking cross kick.

East Coast had a long period of attack but lost the ball at the tryline, and then from the counterattack on an intercepted pass, King Country put the ball through the hands for fullback Alefosio Tapili to score under the posts.

Again, East Coast had chances before the break, but just could not get the ball over the line.

Tempers frayed a little in the second stanza, as King Country first-five Evaan Reihana added a penalty for 17-0, before East Coast finally showed some good control with ball in hand – No 8 Hone Haerewa and halfback Sam Parkes combining to set up their 10-test All Black Zac Guildford to score his second try for the union.

Guildford then sparked another breakout from their own half and East Coast were dragged down only inches from the line, and when King Country winger Alex Thrupp tried to snatch the ball from the side of the breakdown, he received a yellow card and the home side had a penalty try for 17-12.

Eager to run it from their half, East Coast infringed at the ruck and Reihana coolly slotted the three points to move his team clear again.

East Coast bravely continued to run it from anywhere and everywhere, but handling errors and penalties cost them, as with just a couple of minutes remaining, King Country got an attacking lineout and threw long to their halfback Zayn Tipping, who was stopped just short, and reserve forward Nick Barnes burrowed over for the match winner.

All Blacks team for Test against South Africa