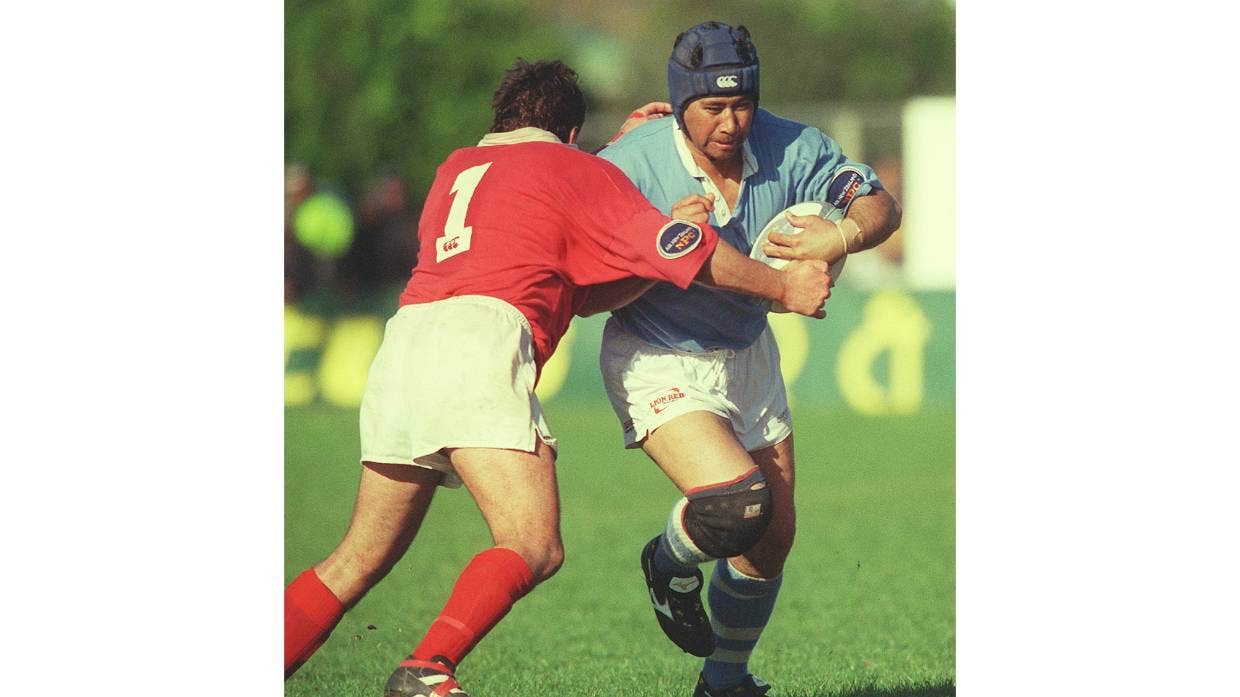 above: Waitoa playing for Ngāti Porou East Coast vs Poverty Bay in 2000.

They’re a kind of holy trinity on the East Coast.

They were certainly the holy trinity to Morgan Waitoa, whose death on December 29 has left a hole in the lives of many.

Enoka Morgan Pohoikura Waitoa (known as Morgan), 61, failed to resurface while diving for kaimoana near Te Araroa with his son and grandson.

Waitoa was born and bred on family land at Te Araroa. He was the second to youngest of eight children, raised with a strong sense of “whanaungatanga” and “manaakitanga”, and grew up learning how to hunt, fish and dive in order to provide for whānau and others.

His dad, grandad and three older brothers were adept rugby players (they all represented East Coast) and the sport was, as it is for many in these parts, intrinsic from a young age. When rugby wasn’t being played at the Waitoa household, it was being watched, discussed, analysed, or never far from front of mind.

Waitoa left school young to become a general farm hand. He would become a skilled fencer and shearer, and an accomplished forestry worker.

He learned to ride a horse around the age he learned to walk, and began breaking them in from a young age. He loved horses, was known for his ‘’knack’’ with them, and as a young man competed on the local summer/autumn horse sport circuit.

He played his first rugby for the Hicks Bay RFC, then Te Araroa Combined RFC (Later KK Combined, now in recess) before moving to Tokarārangi Sports Club (also based in Te Araroa).

He was a natural. Tall, powerful and blessed with a gift for reading the game that must have been cultivated partly by genetics, and partly by years of playing with siblings and elders.

But even with all that going for him, none could have foreseen the remarkable – by national and international standards – playing career that lay ahead.

His first cousin Campbell Dewes grew up playing alongside Waitoa. Dewes, now the president of Ngāti Porou East Coast Rugby Union, was in the provincial team with Waitoa between 1982 and 1997.

“He worked several seasons in the freezing works in Gisborne, turning out for local clubs YMP (Young Māori Party) then GMC (Gisborne Māori Club) while living there. But he always returned home to work on the land until the new killing season started up. Except for a very short stint in the Manawatū and the meatworks in Gisborne, he didn’t move very far from Te Araroa. Hard physical work kept him physically fit and active,” Dewes said.

Waitoa first ran out for Ngāti Porou East Coast as a 17-year-old in 1979. His last game for the province would come in 2006 as player-coach ; 27 years and 115 games later. He was 45, and was not in the team out of sentimentality – he’d had to lace up the boots as they had no injury cover except for the Coach , who dually obliged. .

“He started his rugby in the backs, was at his peak as a loose forward, mainly number 8. Later moved into lock then prop at club level. At six-foot-two, and 100 kg at his peak, he was rarely bested, never beaten. Quick off the mark, big, fast, strong, and skilful. He was physically impressive, and a prominent presence at all levels,” recalled Dewes.

The fortunes for Ngāti Porou East Coast have peaked and troughed over the years. Waitoa went through them all, and was there for the winning eras of 1986-88 and 1999-01 as well as two (unsuccessful) Ranfurly Shield challenges against Auckland in 1987 (at Eden Park) and 1997 (at home: Whakarua Park, Ruatoria).

He coached and player-coached throughout his playing days (including at Ngāti Porou East Coast).

“He was a man of few words. When he spoke people listened,” Dewes said.

In 1998, he married his soulmate Haley Atkins. They have raised four children, all of whom were ferried between sporting endeavours (from swimming club to waka ama to netball, rugby, basketball, to horse sports) by their keen and adoring parents.

“He coached junior Saturday morning rugby, teenage under 14s and under-16s while still playing himself. It wasn’t unusual for him to help run the Saturday morning J.A.B (Junior Advisory Board 5–13-year-olds) in Te Araroa, then jump in the truck to get to Uawa [Tolaga Bay] for his own club game an hour and a half down the road,” Dewes said.

Three of Waitoa’s four children (Wallis, Tina and Materoa) live on the East Coast with their partners and children. The fourth, Hineriu, resides in Australia.

Few things gave Waitoa as much joy as having mokopuna arrive, and he made a point of passing on to them, as he had with his children before, the same values that had steered him through life.

He died while diving for kaimoana with his son Tina and mokopuna Waikura Delamere on December 29. He did not resurface. His body was recovered the next day.

Waitoa lay in state on Hinerupe Marae upon his return for one day and night while under the new Orange Light Covid-19 regulations. He was interred in the family urupā in Taungahāpuku Urupā, Toetoe Station, Horoera, Te Araroa.

As published on Stuff.co.nz : Marty Sharpe