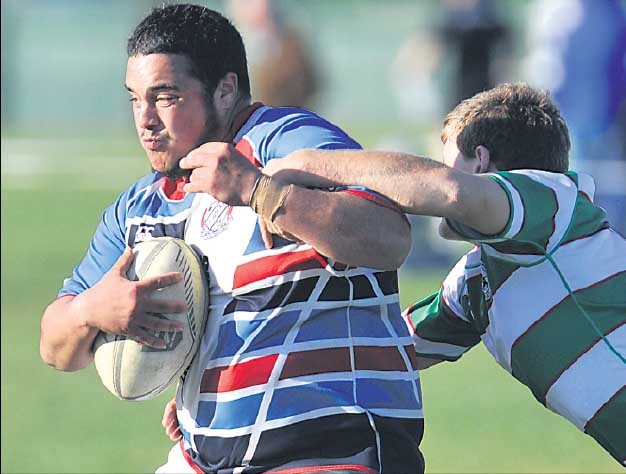 Dickson has been chosen as a prop but can play anywhere in the front row, which makes him a valuable member of the 32-man squad to be coached by former OBM coach and Marist player Stu Blair.

“We only had 24 players last year which made it hard playing four games in eight days,” said Blair, who was assistant coach in 2013. “We had a few players battered and bruised at the end of our four games, which we won. Having eight extra players will help but it’s still a big ask of the players.”

Dickson follows in the footsteps of another OBM front-rower, Jamie Barnett, who Blair said came close to being named player of the tour last year.

“Jamie was outstanding before he had to leave the tour early due to the death of a close friend.”

The team assemble in Wellington on August 15 and have a game the following day against Wellington Centurions Colts.

“There have been a lot of good players, who have gone on to higher honours, who played for NZ Marist.”

Blair gets supplied with a list of nominated players and their profiles.

“The challenge is to come up with a balanced squad. There’s no point in picking six openside flankers so players like Lance have to be versatile.

“Its a tough tour but I’m looking forward to trying to mould a group of players, who have never met, into a winning combination.

“As well as matches we’ll train the day after and that makes it tough on players, so we need to keep the training and coaching basic and enjoyable. They’re not All Blacks so there’s no point in running complicated drills.”

Dickson, 21, made his debut for Poverty Bay in Saturday’s 71-0 loss to Wairarapa Bush.

“I came on for the second half and even though it’s not the score you want to remember from your first game for the Bay, I enjoyed the challenge of stepping up from club rugby,” Dickson said.

“I’m excited about being called into the Bay squad. It’s a huge step up from club rugby — physically much tougher, definitely a lot faster and the skills levels are higher.

“One thing is for sure, I’ll never forget my debut but it’s made me hungry to improve my fitness levels and try to get a start once I come back from the Marist tour.”

“After leaving school I gave rugby away. I wanted to concentrate on getting a job and my first job with JNL meant I couldn’t get to night training sessions. I played a bit of league for the Stallions. They were happy to have me play without training but in April last year I got a job with Electrinet, and later in the season I joined OBM.

“This is my second season with the club and I’m loving it. Good club, good people and now this — playing for the Bay and going on tour.”

“I didn’t know anything about the NZ Marist Colts until last year. It’s not quite the same as following in Hec’s footsteps but making the Colts is something I’m proud of having achieved.”