Junior Lions national U19 Champions with emphatic win over Canterbury 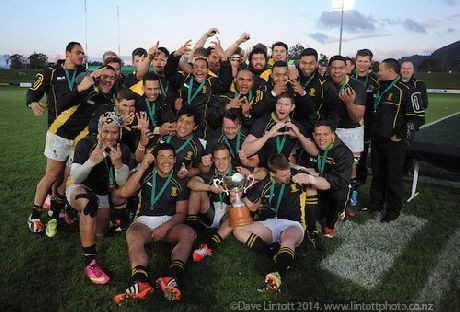 The Wellington U19s celebrating their win over Canterbury in the National U19 tournament final. Photo credit: Dave Lintott.

The Wellington U19s are the inaugural National U19 tournament champions, Beating Canterbury 32-21 in the final of the Jock Hobbs National U19 Tournament in Taupo this evening.

The Junior Lions lifted the inaugural Graham Mourie Trophy with a convincing four tries to two victory, pulling clear in the second half after scoring the only try of the first half to lead 10-6 at the break.

In a tense finish, fullback-turned first five-eighth Chase Tiatia sealed the win with just three minutes remaining, latching on to a turnover and sprinting 60 metres to score untouched.

Tiatia praised his teams efforts afterwards: “This means a lot to the guys, we’ve been building this win throughout our campaign,” Tiatia said.

“We tried to win the physical battle and we just had to tough it out at the end as Canterbury are a good side.”

On scoring the winning try he added “I saw the ball pop up in front of me and I just snatched at, looked up and said to myself I’ve got to go so off I went and lucky none of them could catch me.”

Wellington had combined confidence with continuity with ball in hand to score two well-deserved tries by midway through the second half and lead 25-9 heading into the final 15 minutes.

On Wednesday, Canterbury had come roaring back from a similar position to pip Waikato. They briefly threatened the same when fullback Geoff Bridge barged over to cut the lead to 25-16 and the red and blacks were in the ascendancy.

Left wing Aleks Noble-Campbell, with a big defensive play in knocking the ball away from a Canterbury player’s hands and Tiatia by collecting the spoils and racing away took the wind out of their sails.

Wellington was already celebrating when replacement Canterbury hooker Elia Elia crossed the chalk for the Junior Lambs for a consolation try.

Playing into a biting southerly that was whipping off Lake Taupo, the Junior Lambs had first use of the wind and dominated early territory – but Wellington showed their intent early, tearing into the contact areas and hustling and bustling Canterbury into mistakes at any opportunity.

Wellington’s committed team effort in laying their winning platform was led in the forwards by No. 8 Teariki Ben-Nicholas, hooker Leni Apisai, flanker Sam Wasley and lock James Blackwell, who all had strong games.

Halfback and captain Luke Campbell directed play well, and scored the first try, while second five-eighth Troy Mohr and the mercurial Tiatia were both standouts in the backs.

It was skipper Luke Campbell that made a half break, which was carried on by Blackwell, that led to a penalty and for first five-eighth Pakai Turia to kick the game’s first points.

Canterbury first five-eighth Finn-Hart Strawbridge replied with a penalty and it was 3-3 midway through the first half.

Wellington centre Wes Goosen then made a play that epitomised their effort, tracking back to save a certain try after a hack ahead by Canterbury from a Canterbury lineout win against the throw.

The Junior Lions then struck to score their first try, Campbell ducking and weaving under a ruck to dive over to score under the posts.

The try came after a patient build-up, working their way up into Canterbury’s 22. Tiatia and second Mohr combined to stretch Canterbury in broken play before Campbell scored. Turia made no mistake of the conversion to put Wellington ahead 10-3.

Strawbridge replied with his second penalty with the last act of the first half and Wellington went into halftime leading 10-6.

Early in the second half, Turia placed a stab kick behind Canterbury’s line that was touched by a Canterbury defender and Wellington won an attacking lineout in prime position.

Canterbury won the set-piece, but Tiatia sparked their second try by returning a kick and chase and dancing his back through several would-be tacklers and offloading to Teariki Ben-Nicholas in support.

The No. 8 was dragged down short but from the next play, Campbell ripped a lovely pass across the posts across to Turia who scored out wide. The conversion was missed, but Wellington now led 15-6.

Turia was also injured in the act of scoring his try, replaced by Josh Robertson-Weepu. Tiatia moved to first five-eighth.

Canterbury weren’t about to lie down, and they launched a furious riposte up into Junior Lions territory and replacement first five-eighth Miles Thoroughgood kicked a penalty to cut Wellington’s lead to 15-9.

The Lions then absorbed more pressure before right wing Faraimo Nofoaiga going desperately close to scoring a third try after a strong period of continuity that was started off the top of a lineout.

Second five-eighth Mohr provided crash ball in midfield and then Ben-Nicholas and Blackwell combined out wide with Nofoiaga who held on with a defensive scrum.

Wellington pushed Canterbury off their own ball and forced their own 5-metre scrum. Nofoaiga then came flying in off his wing but was brought down a metre short of the line. Awarded a penalty, Robertson-Weepu extended Wellington’s lead to 18-9.

Blackwell won the next kick-off and Nofoaiga made a break up the far sideline. He was brought down again, before going over to score from the next ruck. Robertson Weepu’s conversion pushed Wellington out to a seemingly hammer-blow 25-9 lead with 15 minutes remaining.

Canterbury’s challenge was far from over, however. They worked their way up field and maintained pressure through phase play and eventually fullback George Bridge broke through to score a converted try to cut the lead to 25-16.

Tiatia’s re-start went dead in-goal and Canterbury stormed back through into Wellington’s half but he then turned hero by racing 60 metres to win the game.

Meanwhile, Auckland defeated Waikato 20-16 in the play-off for third and fourth and Southland defeated Manawatu 26-21 in the final of the Bottom 8 Michael Jones Trophy.

Auckland’s Mitchell Karpik was the Player of the Tournament.

The Wellington U19 squad that won the National U19 tournament was:

The Wellington Development side enjoyed a free-wheeling 59-48 win over a Tasman XV in their one-off match at Landsdowne Park in Blenheim.

Wellington ran in nine tries in the win over a composite Marlborough and Nelson Bays sub-unions team that came together for this match. No. 8 Matt Peni crossed for a hat-trick and tight-head prop Whetu Henry bagged a brace.

Lock Nemani Waaka and flanker Josh Hunt scored sixth and seventh tries through the forwards, while replacement backs Nick Grigg and Aukuso Tuitama both found the whitewash in the nine-try victory.

The Wellington Development side plays Bay of Plenty Development in Taupo next week in their final encounter this season.