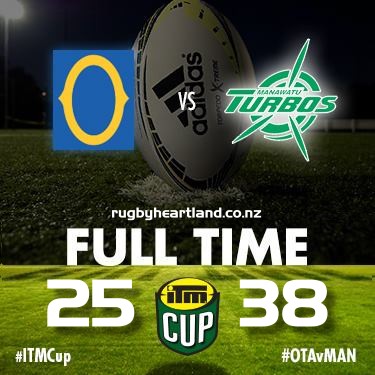 Playing at a high tempo throughout, Manawatu demonstrated why they have dominated the Championship but found a determined, if at times untidy Otago side keen to move the ball as well.

Otere Black, who kicked 11 points, guided his side around the ground efficiently and was accurate in his distribution while the

Otago made a fine start, almost scoring from Manawatu’s first kick-return from the game’s start but a wrong choice short of the line saw a try go begging. However, Manawatu were unable to escape their 22m area and after several crossfield movements it was lock Joe Latta who opened the scoring with a third minute try.

But it was only a matter of time before Manawatu secured regular possession and when it came, Nehe Milner-Skudder put the pressure on when chasing his own downfield kick. He secured the ball at the tackle and fed it quickly for halfback Jamie Booth to make the break and then find captain and flanker Callum Gibbins well placed in support.

Then in the 16th minute after more persistent driving plays one off the rucks by the tight forwards, the ball came to Black on the blindside and he slipped a kick into the in-goal area. Halfback Josh Renton look to have secured the ball but it was ripped from his grasp by wing Nathan Tudreu who scored.

Trudreu went in again five minutes later after a superb lineout play by Manawatu which saw good ball moved with Tudreu coming off the wing at speed and stepping into wide open spaces.

It seemed a bad mistake by Newton Tudreu when covering in defence, securing the ball and then throwing a pass five metres from the line to fullback Trent Renata could cost Manawatu a try. But after flanker James Lentjes crossed for a try, referee Glen Jackson checked with the TMO and an Otago player during the movement stepped out.

Eight minutes into the second half Manawatu brought up their try scoring bonus point after a superb kick return by Milner-Skudder, showing no signs of the concussion test he took in the first half. He linked with Jason Emery and Hamish Northcott who was grounded just short of the line. From the ruck it was hooker Rob Foreman who scored.

Otago kept in touch however, when from a five-metre scrum wing Fa’aisu Fuatai came into the backline and worked his way over for a try which closed the gap. However, a penalty conceded at the other end allowed Black to take the lead out to 11 points.

Otago twice got into position to force for more tries, but on each occasion mistakes allowed Manawatu to clear the line and the chances were lost as Otago ended their season with the loss.

A lineout drive with No.8 Charlie O’Connell combined with replacement hooker Sam Anderson-Heather who scored but any threat in the last moments was lost when Hamish Northcott was able to cross in the final stages for Manawatu.