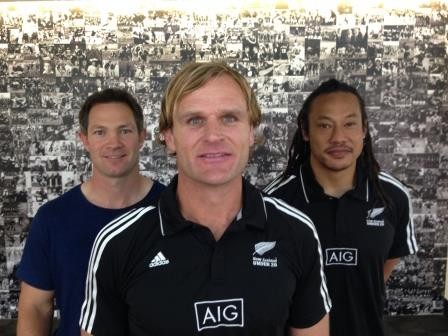 “Scott brings some fantastic experience to this role having been a selector and assistant to the Under 20 coaching team for several years.  He also brings with him the experience of having been Head Coach of Canterbury for the past two seasons.

“He was a passionate and highly motivated member of the Under 20 management last year, and we’re delighted he now steps into this key role.  He will be joined by two exciting coaching talents in Leon and Tana.

“Leon has been part of the Tasman Makos campaign and we saw them win last year’s ITM Cup Championship, and a promotion into this year’s Premiership division, followed by a remarkable season culminating in the Premiership Final against the eventual winners, Taranaki just a few weeks ago.

“Tana has just been magic for Counties Manukau since his very first season when the Steelers earned the coveted Premiership promotion by winning the 2012 ITM Cup Championship.

“All three bring a unique perspective to coaching, having played at the highest level.  As ITM Cup coaches, they have also developed a keen eye for identifying and working with young and emerging talent in their respective provinces.”

Scott Robertson said he was delighted with his appointment and he was excited about working with MacDonald and Umaga.

“Those two bring a huge amount of experience with them.  Both are highly respected by players and they bring great knowledge to their areas of expertise – Leon with attack, Tana with defence and in particular counter-attack.

“Working with this age group is a real honour for us.  We know how much it means to pull on a black jersey and we are keen to ensure the legacy and the heritage of the jersey continues to be represented well by the young men we select.

“For that reason, critical for us right now, is to get the selection right – and that work is already under way as we prepare to name players for our first development camp later this month.

“There is some great talent out there and we got to see some of that on display at the Jock Hobbs Memorial National Under 19 tournament in Taupo last month.

“That was an invaluable way to see boys playing in an environment similar to a JWC tournament – six games in a condensed window and playing against others of a similar age and playing experience. That was a great platform for identifying potential talent.”

“Our campaign planning is well progressed and I’m very excited about the challenge ahead for us,” Robertson said.

The battle of ‘the bros’