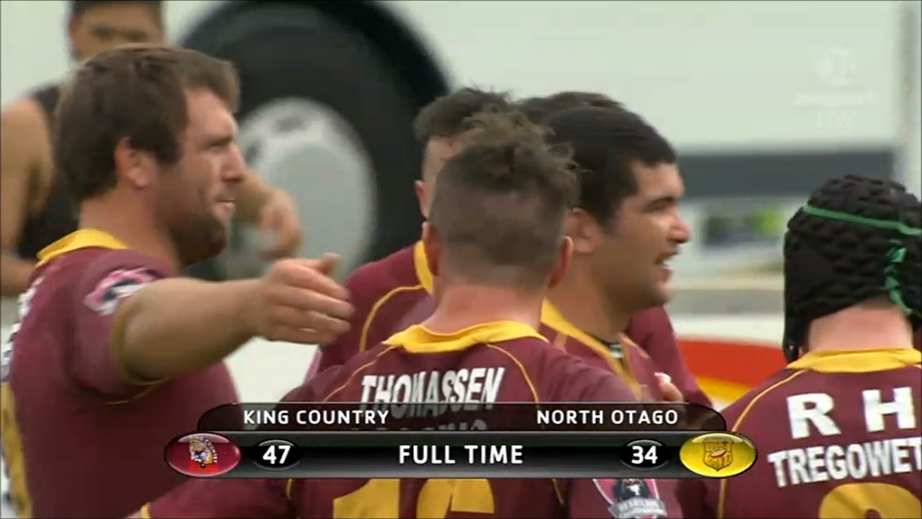 King Country overcame a yellow card, a resurgent North Otago and a number of missed tackles to claim an historic Lochore Cup 47-34 amid jubilant scenes in Te Kuiti on Saturday.

Wing Iliesi Ratuva’s two tries and an assist were complemented by fullback James Hemara’s brace as the hosts secured a 20-17 half-time lead.

North Otago weren’t to be outdone however, and a brace to Inoke Naufahu saw the visitors take a 27-25 lead with 33 minutes to play.

No.8 Rob Sherson’s yellow card minutes after scoring a crucial try for the hosts was a pivotal moment, and one that saw the hosts unite to ground a high-flying North Otago.

In the end, some defensive brilliance ensured was followed by two late tries – including Sherson’s second – as the Rams finished victorious and avenged their 2006 final defeat to Poverty Bay.

Zayn Tipping kicked his way to 100 Heartland Championship points for the season, becoming the fourth player in the province’s history.

North Otago had their chances, but they paid the price for a disappointing opening 30 minutes where their strategy of slowing down play at the expense of penalties allowed the hosts to create a 15-0 lead. To their credit they responded brilliantly thanks in large part to the dynamic Sala Halaheva and Lemi Masoe, but weren’t able to overcome a passionate and spirited King Country side.

Superb overhead conditions saw a large crowd at Rugby Park in Te Kuiti – including Sir Brian Lochore – take in a fantastic opening half from the hosts.

The match was King Country’s first final since 2006, but it was the hosts who looked like championship material for most of the opening half. After pushing North Otago back in the opening five minutes, the hosts turned the ball over and scored minutes later through fullback James Hemara.

The hosts withstood a period of pressure before Anthony Wise opened another hole before quick hands from the King Country forwards saw Hemara score his second try of the afternoon.

North Otago were left licking their wounds after Tippping’s first penalty of the afternoon – one that saw him reach 95 points for the season – extended King Country’s lead to 15-0.

But the visitors began to find some confidence, and shortly after Palmer’s first penalty of the afternoon, Heartland XV squad member Lemi Masoe scored to reduce the gap to five points with five minutes remaining in the first half.

King Country wing Iliesa Ratuva’s ninth try of the 2015 looked to have finished the half on the front foot for the hosts, but North Otago halfback Inoke Naufahu’s first Heartland Championship try gave the visitors the boost they needed as they trodded off Rugby Park with a 17-20 deficit.

It looked like Ratuva would again prove to be a thorn in North Otago’s side after the Fijian scored in the opening minutes of the first half. Instead, Naufahu’s second countered brilliantly for the visitors as they took a 27-25 lead after 47 minutes.

But all it did was awake the King Country side, who through scored through Sherson before being reduced to 14 men. The side lifted and defended their hearts out over a stoic North Otago outfit.

Their reward for their resilience was Manuele Alofa’s try – King Country’s sixth of the afternoon – and one that helped Tipping reach 100 points for just the fourth time in King Country history. Sherson then scored to make amends for being sinbinned as they realised the Lochore Cup was staying in Te Kuiti, despite Maene Mapusaga’s late consolation try.