Having offered a sneak preview of what the Crusaders might look like in the future during their 53–15 win over the Force in Perth, it is a more traditional line-up that will meet the Brumbies in Canberra on Friday.

Illness forced the Crusaders to throw a large net out to secure a playing 23 in Perth with front-rowers Seb Calder and George Bell introduced to Super Rugby while lock Liam Hallam-Eames answered a call to get on a plane to Perth immediately.

He arrived in time to be introduced to the Crusaders’ coaches on Saturday morning, and with Calder and Bell, they went out and stamped their passports into a Crusaders’ future with promising debuts.

Assistant coach Scott Hansen said, “How exciting was that to have three young men get out and join the Crusaders’ family?”

While prop Oli Jager, halfback Mitchell Drummond and locks Zach Gallagher and Dominic Gardiner are still under Covid observation in Perth, Sione Havili Talitui is back in Christchurch to have a scan on his injured hamstring.

However, with captain Scott Barrett, hooker Codie Taylor and midfielder Jack Goodhue available, the pressures are not so great, which is timely given the Brumbies’ challenge.

“He’s our leader, it’s great to have him back. He’s been through his procedures regarding the technical proficiency around defence. Scooter is a massive leader for us on the field. He gives us go-forward as well as leadership,” he said.

That would be important against a Brumbies side sitting one place above the Crusaders on the points table in second.

“They have got fantastic DNA, they are really confident in their game at the moment, strong, abrasive, playing on the front foot. They’ve been exciting to watch the last three weeks around their game and their balance. We’re looking forward to Friday evening,” he said.

The coaching group were happy with the side’s turnaround win in Perth and the balance the team achieved in their game management and with and without the ball.

“But leading into the Brumbies we know we have to be so much better,” he said.

That involves efficiency with the ball, playing in the right areas and their set piece and building on the excitement of playing in Canberra for the first time in several years.

Wing George Bridge said the game is a challenge for the side. The winner would go a long way towards ensuring a home semifinal next month.

“We’ve got plenty of respect for this side, they have played some good footy and beaten three New Zealand teams on the trot and they’ll be looking to get one-up over us,” he said.

They wanted to build on the effort in Perth to get some momentum leading into the end of the season. 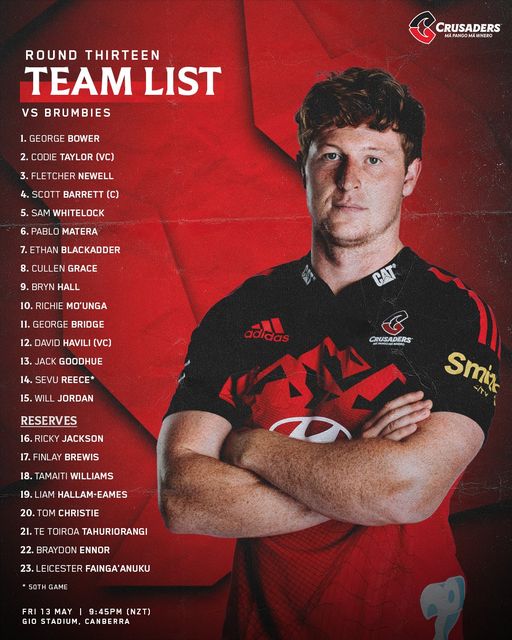