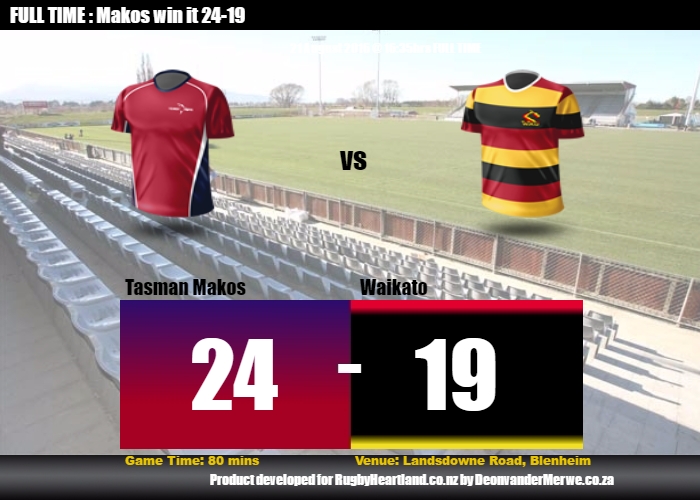 Tasman have started their new era under coach Leon MacDonald with a 24-19 win over Waikato at Landsdowne Park in Blenheim on Sunday.

While Tasman had the wind behind them in the opening half, it was Waikato who controlled possession and took a 10-9 lead into the break. However, the Makos scored two second half tries through superb debutant Finaly Christie and veteran Alex Ainley to secure a tight win.

As predicted, it took both the Super Rugby players from both sides time to adapt to the new laws around the breakdown in blustery conditions at Landsdowne Park in Blenheim. That translated into some stop-start moments that didn’t take away from the overall pace and energy of the all-Premiership encounter.

The win gives Tasman four crucial Premiership points and extends their winning streak over Waikato to four. The Makos have also won their last five opening-round clashes in what is a perfect start to the season. Waikato, meanwhile, were left to rue their second consecutive opening-round loss to Tasman in as many years, but did come away with a bonus point.

The visitors have six days to ponder what went wrong ahead of their first Ranfurly Shield defence of the regular season against North Harbour on Saturday. For Tasman, the challenge goes up a notch when they travel to play big brothers Canterbury on Sunday.

Tasman had the wind advantage in the first half, but Damian McKenzie’s boot ensured the visitors took an early advantage, with wing Jordan Trainor’s try in the 32nd minute opening up a 10-3 lead.

The Makos got themselves back into the hunt through Mitchell Hunt’s boot, and they went into the sheds trailing the visitors 9-10.

Christie’s try to open the second half gave Tasman their first lead of the game. Waikato continued to ask questions of the hosts, and when McKenzie kicked his fourth penalth, Waikato held a three-point lead with seven minutes to play.

But Alex Ainley broke Mooloo hearts with an unconverted try three minutes later that sealed the match for the hosts.

Tasman halfback Finlay Christie didn’t look out of place on debut for the Makos. The former New Zealand junior gymnastics representative’s splendid service from the breakdown was complemented with a try to show why he was preferred ahead of Tasman stalwart Billy Guyton.

His opposite, Waikato captain Isaac Boss showed no signs of rust in what was his first New Zealand provincial game since 2006. The former Ireland No.9 was a livewire, and provided a number of heavy tackles.

Willis Halaholo had a limited debut for the visitors, but the former Southland second five-eighths showed his class with a long pass that found Trainor, who dived over to score the first try of the game.