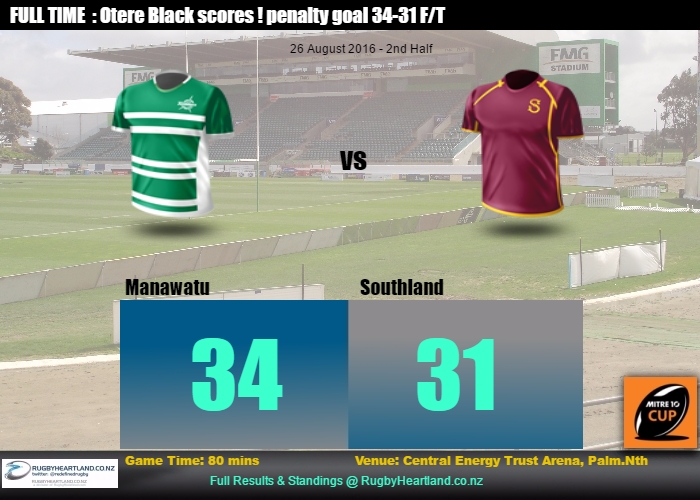 Two vital kicks at goal in the last two minutes denied Southland a well-earned draw when they lost 31-34 to Manawatu in Palmerston North on Friday.

But then after the final hooter had gone, Southland were penalised and Manawatu first five-eighths Otere Black stepped up and landed the winning penalty goal to complete a flawless night of goal-kicking.

Manawatu and Hurricanes midfielder Ngani Laumape returned to his home region and turned on a hat-trick of tries to set the electric pace in the game.

Southland paid dearly for handling mistakes that allowed Manawatu their half-time lead. But rather than lie down Southland stormed back with two tries in the first five minutes of the second half to even up the contest.

It was a demanding game but with some electric backplay and skilful work among the loose forwards.

If Laumape was the star for the home side, who were honouring their Ranfurly Shield team of 1976-78, then first five-eighths Wharenui Hawera was a stand-out performer for the southerners.

Manawatu flanker and captain Callum Gibbins showed his awareness from a ruck close to the sideline on halfway to sense a blindside gap. He hared through it and set sail for the goal-line to score a fine try after four minutes.

Southland looked to get back into the hunt with some concentrated driving at the Manawatu line but in attempting to be quick with tap penalties they paid price for impatience, and were not helped, as was the case throughout the first half with poor passing to often unsuspecting carriers.

But having tried to score themselves, Southland saw Manawatu get back downfield and when a turnover was achieved fullback Jason Emery flung the ball wide to space where second five-eighths Ngani Laumape had too much speed, and class, to cross in the 18th minute.

It was poor handling again that turned the ball over to Manawatu that allowed wing Ambrose Curtis to take advantage of a long pass from inside to kick ahead where Emery secured the ball and fed supporting Laumape who ran away to score his second.

Down 0-24 at half-time, Southland stormed back after half-time with two tries in three minutes. The first to No.8 Mika Mafi came from the choice to go for a lineout in the corner from a penalty. Southland worked the ball well across the field and then Mafi straightened with a strong run to get over.

Then lively first five-eighths Wharenui Hawera showed his deceptive skills by baulking to kick and running instead to open a big gap to race through and while his pass was intercepted it wasn’t controlled and replacement prop Peni Ravai found fullback Junior Ngaluafe racing in to score.

Southland lost their impetus however, as lock Matthew Philip attempted to throw a long pass in the 48th minute only to see centre Hamish Northcott make the intercept and who was waiting in support to run away to score? Laumape who made it a hat-trick.

However, Southland weren’t finished and it was Hawera whose long pass committed Curtis who wasn’t able to grab the ball. However, his opposite Thompson Te Muunu did and he tore along the sideline and in-passed to Hawera perfectly place in support to score.

Lock Kane Thompson and hooker Tim Cadwallader had big games in the Manawatu pack while halfback Jimmy Cowan and hooker Brayden Mitchell showed their experience at vital stages, No.8 Mafi shaped promisingly as well while Ravai showed enough to suggest he will get plenty more game time. 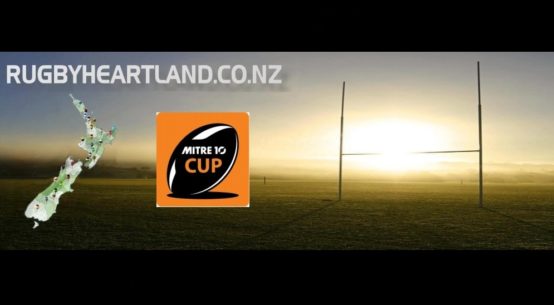 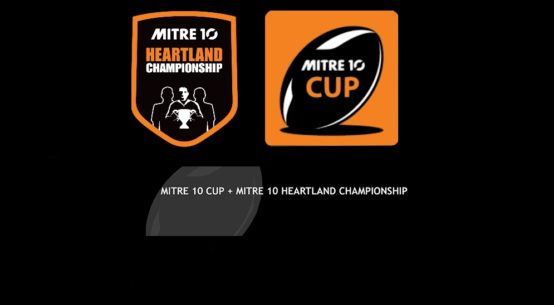