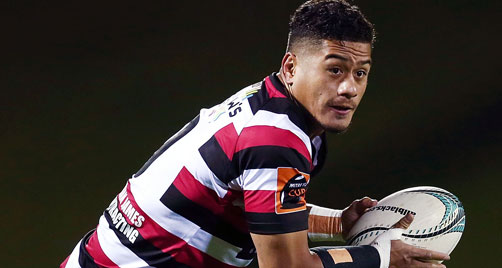 Memories of two last-minute losses in their last two games were eased for Counties Manukau when they beat Auckland on Eden Park 30-26 on Sunday.

Counties Manukau couldn’t seal the win until the 77th minute when halfback Augustine Pulu darted around the blindside of a scrum and ran 22m to score to reclaim the lead for the side.

It was a deserved win, Auckland were lamentable, riven by an incoherent match plan that too often promoted ineffiency and a lack of continuity.

They took the requirement for patience in their set-up work to ridiculous extremes. Ridiculous because it was 74 minutes before Auckland could claim the lead by finally putting a constructive play together courtesy of set-up work by replacement flanker Joe Edwards, who came on when Blake Edwards was forced to leave the field with an injury, replacement lock Patrick Tuipulotu and No.8 Akira Ioane.

Their work was capped by fullback Latiume Fosita who crossed for the try.

But in typical fashion for Auckland on the day the restart was knocked on and from that scrum Pulu made the winning break. He had been in good touch all game and it was fitting reward for a side that

Counties Manukau dominated the first half and spent the majority of time in Auckland’s territory.

They scored first when deciding not to kick for goal from a penalty chance and as ruck momentum and phases were strung together it was lock Viliame Rarasea to reach out and put the ball on the line.

Ten minutes later, after 26 minutes, another tap penalty option allowed big wing Sione Fifita to feature twice with strong running in a move which saw the ball held up in a ruck on Auckland’s line. It was cleared to the blindside where Fifita passed it on to hooker Gafatasi Su’a, prowling a la Dane Coles, to dive over in the corner.

It was 36 minutes into the game before first five-eighths Simon Hickey landed the first of two first half penalty goals to pull Auckland back to 6-15 at the break.

No sooner had Hickey added a third penalty goal early in the second half than Auckland’s impetuosity caused it more grief. A long Counties Manukau wipes kick went out just short of the Auckland goal-line.

A quick throw was attempted only for Hickey to be caught ball and all behind the goal-line resulting in a five-metre scrum. However, the inclusion of All Blacks squad members prop Ofa Tu’ungafasi and lock Patrick Tuipulotu, stiffened the pack and a tighthead was achieved.

But halfback Leon Fukofuka failed to find touch and when the ball bounced close to the sideline, Pulu was able to flick the ball back to Fifita and he charged down the sideline and scored in the corner.

Auckland, with all the potential in the world, still look like individuals rather than a team and it defies belief that more effort is not made to involve centre Rieko Ioane in more play.