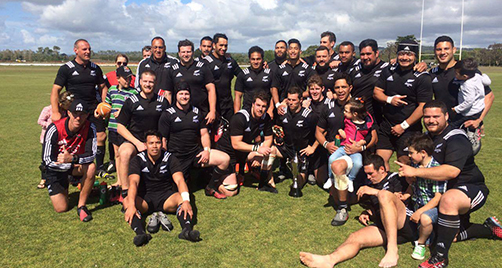 The NZ Heartland XV retain the Ian MacRae Cup in their annual fixture against NZ Marist, with a 35 – 14 win to start their campaign.

It was a well contested game, with the Marist pack tacking it to the Heartland forwards up front and gaining dominance at scrum time.
t the Heartland team made the most of their opportunities in the second half and eventually closed out the game.

There was plenty of feeling going into the game, with the teams performing their haka’s simultaneously and some solid hits in the opening salvo’s. The Heartland XV were playing into a stiff wind in the first half and that, coupled with Marist’s strong in defenc,e meant that points were hard to come by. It took a storming 40m run by the North Otago prop Ralph Darling to opening the scoring, with James Lash adding the extra’s. This was followed by a good passage of play by Heartland team that eventually saw the young try scoring machine from Wanganui Te Rangi Waitokia going over in the corner. Again Lash, kicking well into the breeze converted the try, pushing the score quickly out to 14-0 in favour of the Heartland XV.

It stayed that way until half time, but whether it was the half time talk, or the local Marist crowd that slowly found their voice, but Marist came back into the game with a couple of quick tries of their own. First was a penalty try from a scrum that was growing in confidence and causing the Heartland XV trouble under their own feed. The second try for Marist was one of the Heartland Unions own, in the young flyer Simon Lilicama from the Athletic Marist club in North Otago. Showing a good step and pace, Lilicama’s try and the tight conversion by fullback Hamish Strachan, tied the game up at 14 all.

From there it was an arm wrestle, with Marist throwing caution to the wind and putting pressure on the Heartland pack. But the response was good and after some end to end moves from both teams, it took a concerted effort on the Marist line for the Heartland Captain Keiran Coll to muscle his way over to break the dead lock.

The depth of this Heartland squad was then on show as the changes were made and ascendency slowly regained. The final two tries being scored by substitutes Eddie Cranston, Captain of Wairarapa-Bush and big King Country mid-fielder John Koko. Lash continued his 100% record for the day with all five tries converted and steered the team well round the field. Other players to stand out were Coll, big West Coast lock JJ Manning and the war horse of this Heartland side, Wanganui’s Peter Rowe.

For Marist, all the front rowers fronted well and caused issues for the Heartland scrum. But Marist St Pats and Wellington hooker Valentine Meachen and half back Shawn Begg were standouts.

The Heartland XV will be happy with the hit out with the two games against strong Fijian opposition to come. The good performance won’t create too many selection issues for coaches Barry Matthews and Mutu Ngarimu as all players did enough to be considered or the first game of the Fijian tour against Nadi on Tuesday evening.