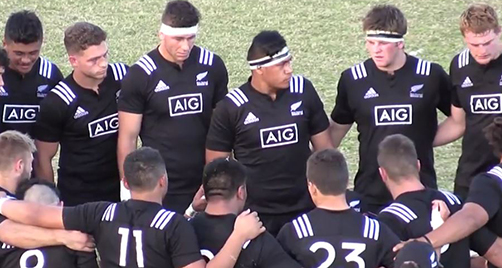 The New Zealand Under 20s have made it two from two at the Oceania U20 Championships with a commanding 80-23 victory over Samoa at Bond University.

Despite making 13 changes to the run on side that thumped Fiji 63-3 on Friday, the NZ Under 20s lacked no synergy as they scored seven tries in the first half to lead 47-6 at the break.

Relishing the afternoon kick off and dry track, the Craig Philpott-coached side punished any Samoan mistakes and were lethal on the counter attack to build an unassailable lead in the first spell.

Wing Caleb Clarke was particularly damaging in playing a key role in a number of tries and scoring one himself.

The second half was much more competitive as Samoa made a number of influential substitutes.

Managing to hold the ball for long periods of time, Samoa forced an error from New Zealand to cross for their first try. Replacement outside back Alex Pohia showed great skills to pounce on a loose New Zealand offload and score in the corner. Deadeye fullback Ricky Pauli landed the sideline conversion to go with three earlier penalties to close the gap to 52-16.

New Zealand answered back quickly through an electric try to wing Jona Nareki before Samoa showed they could match the New Zealand’s ball playing skills when Captain Losi Filipo scored.

But that was to be it for Samoa as New Zealand crossed for tries to replacements Ezekiel Lindenmuth and Dalton Papalii in the final five minutes to blow out the final score to 80-23.

The New Zealand Under 20s now face Australia in the final match of the Oceania Under 20 Championships at 9pm (NZT) on Saturday 6 May.