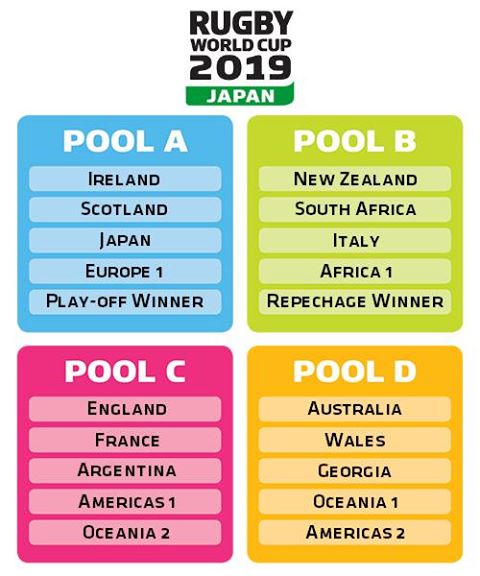 The current World Champions have been drawn in Pool B along with 1995 World Cup winners South Africa, six-time World Cup rivals Italy, the winner of Africa 1 and the Repechage winners from the qualifying tournament.

All Blacks Head Coach Steve Hansen, who was involved in the draw, said he was pleased with the outcome of the draw and was looking forward to a great tournament.

“Everyone will be excited by the game against South Africa, and we know each other pretty well. We will get to understand each other a bit more over the next two years before we play here in 2019.

“Having the World Cup in Japan is a great opportunity to grow rugby. It’s a special part of the world and Japan is leading the development of the game in the region. Let’s hope the tournament reaches great heights and is an exciting event to come to.”

New Zealand Rugby CEO Steve Tew said the draw represented a milestone on the All Blacks’ path as they looked to again challenge for the Webb Ellis Cup.

“Every pool in a World Cup is challenging and the reality is you need to win seven games, regardless of who is in your pool, to win the tournament.

“We will find out the details of which order we will play the teams in our pool and our venues in September which will kick-start the next phase of our detailed planning for the tournament.

“The pool draw in Kyoto was a great success and brilliantly run. It promises to be an exceptional tournament in 2019 that will showcase rugby on the global stage and help to expand the game the into Asia.”

#RWC2019 Going by seedings this is how the knockout draw could work out: