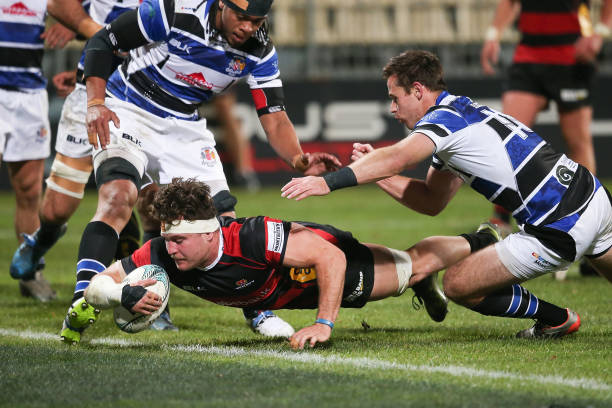 Amidst rampant Lions fanfare, Ranfurly Shield rugby is back.

Holders Canterbury tonight demolished Heartland champions Wanganui 71-5 in front of an alleged crowd of 3500 – many perhaps fancy-dressed as grey seats – at AMI Stadium in Christchurch.

But the new-look Canterbury side, featuring four debutants in the starting XV and a new head coach in Glenn Delaney, took a crusading sword to them.

“What are you, the Lions?” one wag suggested.

Canterbury quickly got into gear, scoring twice from too-easy breaks from inside their own half, two line-out moves, and another wide one.

Wanganui did, however, manage to score just before halftime, with solid second-five Timoci Seruwalu stepping over.

Fringe Crusaders player, lanky (aren’t they always?) lock Mitchell Dunshea opened the scoring after the break, before hooker Nick Werahiko dotted down for his second try.

The red-and-blacks rolled their subs in the final quarter. Still, they kept their shape and cohesion. Their line speed and strong, head-on tackling was apparent.

Reserve back Steve Alfeld was given a try on a platter by the impressive centre Poasa Waqanibau, who scored one himself, and replacement fullback Caleb Makene was rewarded for his energetic injection with a late five-pointer.

But despite the gulf in talent, and tiring legs, the visitors toiled hard and showed true Heartland grit.

After its 134th successful defence, Canterbury now takes the Ranfurly Shield on the road against Mid Canterbury in Ashburton on August 4, ahead of the Mitre 10 kicking off proper on August 17.