Article By: Jared Smith
Jared Smith is sports editor of the Whanganui Chronicle

West Coast and North Otago continued their unbeaten runs on top of the Mitre 10 Heartland Championship table, but not without clawing their way back from big deficits after the third round was marked by a number of 80 minute thrillers on Saturday.

After last week’s round was split across Friday evening and Saturday afternoon games, most fixtures were back in their regular 2.30pm timeslots, and for Greymouth fans who chose to go to John Sturgeon Park instead of staying home to watch the All Blacks vs Tonga, they got their money’s worth.

The home side had their first converted try inside of five minutes, but Mid Canterbury dotted down three times to take a 19-7 lead out of the first quarter.

West Coast closed the gap to five points with another seven-pointer, but Mid Canterbury went over two more times before the break, their first-five Corey McKay having converted three of their five tries, to raise a 17-point buffer.

Returning from NZ Heartland XV duties, Mid Canterbury flanker Seta Koroitamana would score a double in the match, as did winger Manasa Bari, who like fullback Matt McAtamney posted tries for the second week in a row.

The visitors would get their sixth try in the second stanza, with McKay converting it plus popping over a penalty, but they were now desperately trying to hold back a red and white tide, as the West Coast came charging home.

The hosts dominated the third quarter with three tries, one converted, to tie the scores up 31-31, and although Mid Canterbury traded tries with West Coast to move back ahead 41-36, the Coasters were good for one more seven pointer.

Taking maximum points from a match which at one point they looked like getting nothing, West Coast kept the top spot from likewise unbeaten North Otago, who performed their own miraculous comeback for an important North Island tour win, beating Poverty Bay 34-30 in Gisborne.

The home side would lead by ten points at halftime, as they opened the scoring through a penalty from fullback Andrew Tauatevalu, about to have another high-scoring day, as he also got their opening converted try for 10-0.

In what could have been the decisive moment, Poverty Bay got an automatic seven-point penalty try on halftime when North Otago deliberately knocked the ball down in front of the line.

Not discouraged, North Otago began the second half with a Smith penalty, before Tauatevalu responded in kind for 27-17.

North Otago then kicked it up a gear as centre Clement Gasca scored, with Smith coolly adding the extras and then another penalty to lock up the scores 27-27 with 15 minutes left.

Poverty Bay moved ahead again with Tauatevalu’s third penalty, but North Otago kept coming and who else could be the hero but their local legend Ralph Darling – as the centenarian-capped player and former skipper came off the bench to score the match-winning try in the 76th minute.

Underneath the unbeaten sides, there was considerable movement on the points table, as the teams who picked up their second win from three games made rapid advancement.

After being disappointing last week against King Country in Taupo, Buller welcomed back lock Jeff Lepa and their talisman first-five James Lash from NZ Heartland XV duties, and it was Lash brought the magic again with a penalty 8m in from touch to get his side up 22-21 over a gutted Wanganui at Victoria Square.

Perennial Meads Cup contenders, Wanganui have now dropped their three opening games for the first time in 14 seasons of the Heartland competition.

The visitors started well enough to lead 14-0 as winger Vereniki Tikoisolomone scored two tries, the first coming off a three vs one overlap and then winning the race to the ball after a kick ahead into the same corner.

First-five Craig Clare, back from being the NZ Heartland XV fullback, converted both tries from near touch, and Clare’s absence would be keenly felt after he could not play the second half following an injury to his pectoral muscle.

After a mistake-riddled first half, Buller gave themselves some hope while Wanganui conceded points right on halftime for the third straight game, as home town winger Alex Paterson scored down the short side after buildup from Lash and centenarian-capped halfback Andrew Stephens.

Buller closed up to 14-12 after the break as they put the ball through the hands for the other winger Petaia Saukuru to score, with Lash converting from touch, before Wanganui took advantage of a scrum ball popping out for halfback Lindsay Horrocks to feed his prop Raymond Salu, who dashed 30m under the posts.

Down 21-12 with 15 minutes left and trapped in their own half, Buller needed something and Lash provided it with a quick tap and dash through the defenders to run deep into Wanganui’s 22m, with the ball then spread back towards the middle for second-five Iliesa Ravudra to cross on the other side the posts.

From the kickoff, Wanganui foolishly tried to spread the ball and run out of their own 22m, but got trapped in the ruck near the sideline and Lash raised the flags with his pressure three pointer.

Wanganui had a penalty opportunity of their own on a similar angle approaching injury time, but reserve first-five Dane Whale could not connect.

Their second home win was not quite enough to move Buller into the top four, as Thames Valley continued to shake off their shock start from the Poverty Bay loss to pick up a comfortable 43-15 win over a brave East Coast in the early 12.50pm kickoff match in Paeroa.

In the battle between the defending Meads Cup champions and winless wooden-spooners, Thames Valley made a swift start to lead 17-0 after the first quarter, but the visitors hung tough to get their three unconverted tries on either side of halftime to close the gap to 24-15 after 42 minutes.

Bay of Plenty import second-five Danny Kayes picked up a double, as did returning NZ Heartland XV winger Harry Lafituanai, while flanker Laulea Mau, promoted into the starting XV, scored for the second game in a row.

After his Heartland record-equalling seven penalties against Wanganui, this time first-five Regan Crosland just had to kick three conversions.

South Canterbury have also shaken off their stumbling start, while Horowhenua-Kapiti will need to go away and have a rethink, as the Lochore Cup champions were smashed 57-7 in Timaru.

The visitors welcomed back all four of their NZ Heartland XV reps into the starting lineup, but they fell apart in the third quarter as South Canterbury raced away for 38 points in 20 minutes, with Horowhenua-Kapiti having a man in the sinbin at that time.

South Canterbury had led 12-0 at the break through tries by fullback Zac Saunders, for the second week, and flanker Cam Russell, with Theo Davidson adding a conversion before he would make way for returning NZ Heartland XV halfback Willie Wright, coming on at halftime.

Wright would kick with 100 per cent accuracy for six conversions, plus a penalty, as his side went roaring into the head wind in the second stanza.

Tries came from the other Heartland XV returnee in Kalavini Leatigaga, winger Clarence Moli to follow up last week’s double, along with Joel Smith and Solomone Iavaka.

Both team’s ran on their benches for the final quarter, where the visitors finally got a reply converted try from centre Junior Laioifi off a kick and chase, although the home side had the last word when prop Tokomaata Fakatava dotted down.

And after playing in a prime time televised match under the big lights of Dunedin’s Forsyth Barr Stadium last week, Wairarapa Bush were back home in Masterton and pulled out a 37-31 win over King Country in another high try-scoring thriller.

On their fast-running artificial turf, Wairarapa Bush score 15 unanswered points to start and would then take a 25-14 lead into halftime, before King Country came charging back with two more tries to lead 26-25 with quarter of an hour remaining.

It would be an eventful 15 minutes, as the home side scored to regain the advantage, and then seemed to have sealed the match with a converted try for 37-26 in the 72nd minute.
However, King Country went hunting from the kickoff and gave themselves a chance with their fifth try to close back to within six points with four minutes left.

The home squad held out, despite the squad missing a few injured players, with skilful winger Tristan Flutey getting a double to make it three tries in two home games, while Brendon Campbell came off the bench to also get a brace. 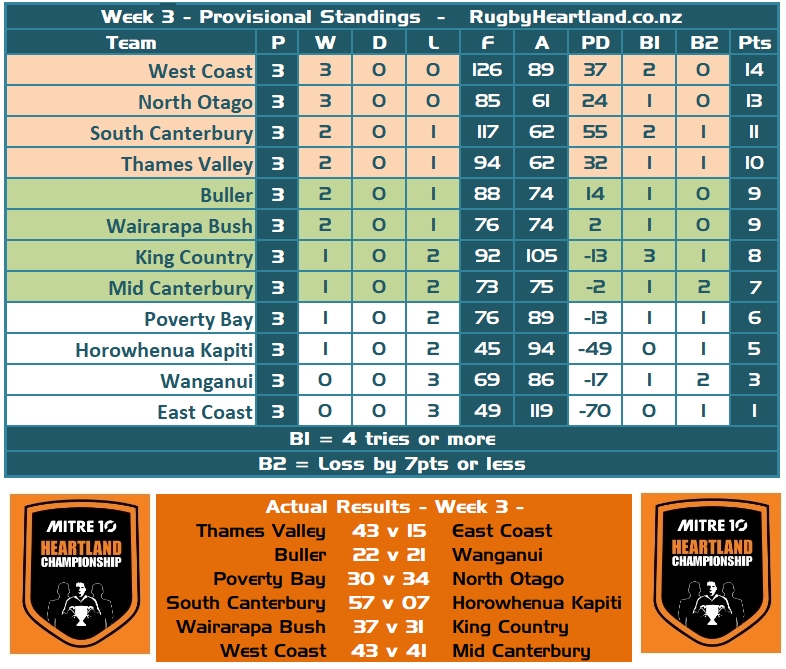