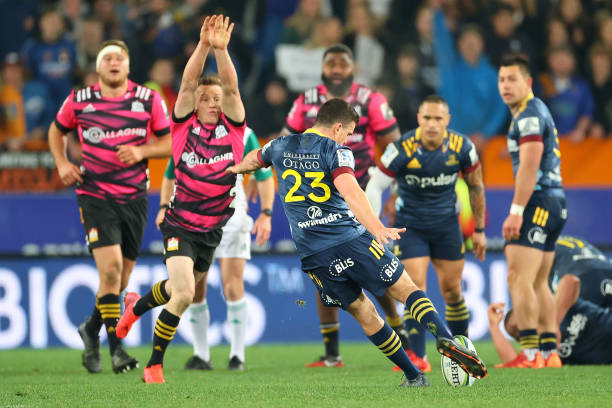 It didn’t need the golden point to be applied but two late dropped goals, one each to Chiefs fullback Damian McKenzie and Highlanders replacement Bryn Gatland, created an exciting finish before the home team took a 28-27 win in Super Rugby Aotearoa at Dunedin on Saturday.

For Gatland, it was a 40m goal that robbed his father and Chiefs coach Warren Gatland, a win in the first game of competitive rugby in the world after the coronavirus pandemic lockdown.

Played under renewed interpretations of the laws, especially at the offside line, and the breakdown, both sides were guilty of failing to nail their legal discipline, which denied the game any flow. Thirty penalties were awarded, 17 to the home side.

The number of penalties awarded in the game was in direct contrast to the reduced number of scrums. There were only six scrums.

However, so basic were the penalties, usually for off-side, or for obvious breakdown infringements, that they highlighted how far referees had departed from the intent of the laws in the past.

The failure to police the off-side line has been a continuing frustration for watching fans for some time and has exacerbated the in-your-face defensive screens that have dominated rugby in the last five years.

Having denied the Chiefs the chance to put their rolling lineout maul to effect early in the game, the Highlanders applied it themselves after Chiefs second five-eighths Anton Lienert-Brown firstly dropped the ball and was then penalised for regathering and holding onto the ball.

Hunt kicked to the corner and after a clean take, and offside play by Chiefs hooker Samisoni Taukei’aho, the home pack charged at the line with hooker and captain Ash Dixon scoring the competition’s opening try 15 minutes into the contest.

Six minutes later, the Chiefs were punished for No.8 Pita Gus Sowakula conceding two penalties, when the Highlanders put their lineout maul to effect again. But as they attempted to move the ball, Dixon’s attempted offload to halfback Aaron Smith was intercepted by his opposite Brad Weber.

The ball was regained and Smith changed the line running hard infield, to set up a ruck. From the ruck, he fired a miss-out pass to centre Rob Thompson running back in on a tangent to take the ball, find space and then practically into second five-eighths Palesio Tomkinson’s breadbasket for him to score.

The Chiefs wasted no time in pulling back the deficit with fullback Damian McKenzie and right-wing Shaun Stevenson working the ball down the right flank before it was moved left through several pairs of hands.

Light hands from Lienert-Brown, quick hands from centre Quinn Tupaea gave wing Sean Wainui a clear run into the line for the try.

A tip tackle in the 31st minute by fullback Vilimoni Koroi on replacement lock Naitoa Ah Kuoi in front of the posts not only saw Koroi sin-binned but McKenzie converted the penalty to give the Chiefs the lead for the first time, 16-15.

However, just before halftime, another penalty kick directed at the corner by Hunt resulted in another lineout drive, this time working back towards the sideline before the ball was released with Smith feeding No.8 Marino Mikaele Tu’u crossed to reclaim the lead at half time.

Penalties continued to dominate the second half and it took 31 minutes before continuity play allowed Lienert-Brown to cross wide out after McKenzie had created an opportunity.

McKenzie then pulled the Chiefs in front with a 77th-minute dropped goal only to see replacement Highlanders fullback Bryn Gatland land another from 40m with a minute left. The result was secured when the Chiefs committed a penalty at the last act, allowing the Highlanders to seal the win.