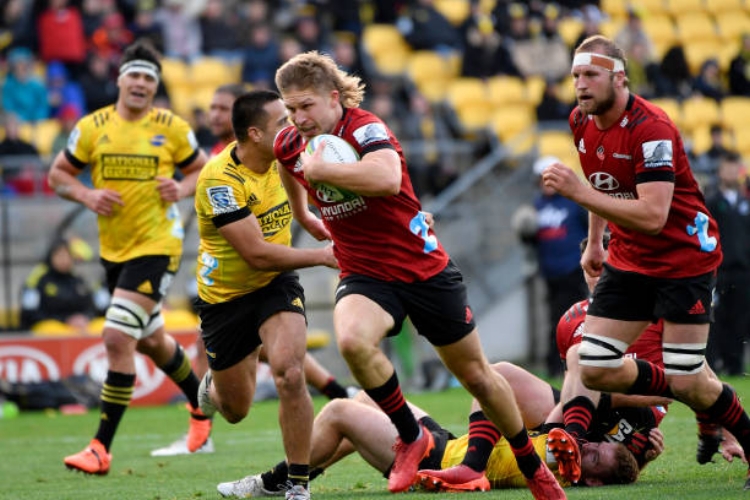 Crusaders power remains unrelenting as the Hurricanes fell to a 25-39 Super Rugby Aotearoa loss at SKY Stadium in Wellington on Sunday afternoon.

Scoring five tries to one, in a game marred by indifferent lineout play for both sides and only five scrums, the Crusaders learned as other teams have that penalty infringements are costly, especially as Hurricanes first five-eighths Jackson Garden-Bachop landed 20 points from his boot.

Starting a week after everyone else, the Crusaders made the perfect riposte, claiming a Hurricanes lineout, running the ball and scoring the first try to wing Sevu Reece 59 seconds after the start.

Several elements combined to reinforce the champions’ preparedness for the competition: prop Joe Moody made a fine surge with the ball in hand, first five-eighths Richi Mo’unga still managed to move the ball under tackle pressure, flanker Billy Harmon picked up an untidy ball while Reece managed an inside pass to Codie Taylor, who immediately fired it back out for Reece to run in at the corner.

Moody and Taylor combined again after some elusive play by fullback Will Jordan and Reece on the left flank, to give halfback Bryn Hall enough room to slip a kick to the in-goal where centre Braydon Ennor was able to dive on the ball for a 13th-minute try.

No sooner had Garden-Bachop snapped over a 30th-minute dropped goal than a high kick to Jordan was returned with fullback Chase Tiatia unable to secure the ball as it fell for Moody to pick up, feed the supporting Jordan who, in the tackle, got the ball to second five-eighths Jack Goodhue who scored between the posts.

Having relied on Garden-Bachop’s boot to keep in touch with the Crusaders, some clever interplay between flanker Du’Plessis Kirifi and centre Vince Aso created their best try-scoring chance. Aso got the ball to second five-eighths Ngani Laumape, who drew two defenders to put replacement hooker Asafo Aumua over in the corner to level the scores at 25-25 with 15 minutes left.

Pressure told soon after, however, as replacement fullback Billy Proctor fielded a kick ahead from wing George Bridge just out from his goalline but close to the sideline, he threw a pass inside to keep the ball alive. Problem was, Crusaders replacement halfback Mitch Drummond was on hand to secure the ball and slip it to Mo’unga for the try in the 65th minute.

The coup de grace was delivered after replacement fullback David Havili made a strong midfield break which saw the Crusaders work their way deep into the Hurricanes 22m area where a rocket pass from Drummond found Havili bursting onto a wider ball to break between two defenders to score.

New Zealand Under 20s named for match against Fiji