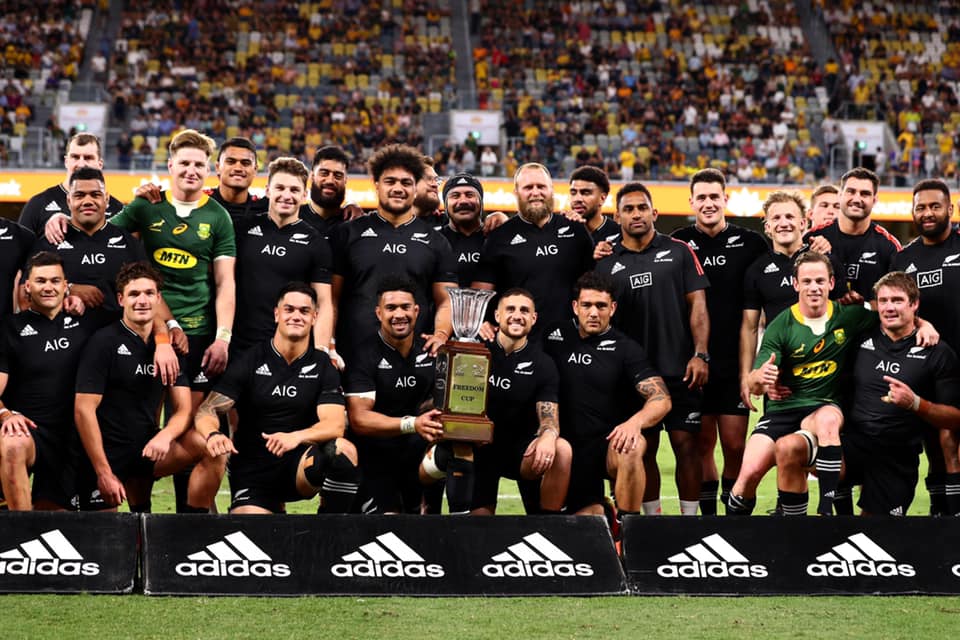 New Zealand claimed the 100th Test in the 100th year to win the Fortinet Rugby Championship with a 19-17 victory over South Africa in Townsville on Saturday.

In a game that offered few running highlights so beloved of the All Blacks, it was in desperation to run the ball in the final minute that South Africa showed the difference between the sides when they had the ball in hand.

South Africa coughed the ball up as they looked to move the ball, as they hadn’t through the earlier 79 minutes. It was reward for the All Blacks’ desire to play the more attractive, and interesting, style of rugby.

In a game dominated by penalty goals, after a try apiece was scored in the first 14 minutes, it was fullback Jordie Barrett who stepped up to the mark and landed a 78th minute penalty goal from 50 metres out after replacement back Quinn Tupaea secured a tackle turnover when Springbok fullback Willie le Roux held onto the ball in the tackle.

New Zealand were in danger of being out-frustrated by the South African tactic of kick, kick and kick again with nary an attempt earlier in the game to move the ball. Many balls were dropped by the All Blacks, a concern after the back three were selected for their ability to handle the high ball, but still the Springboks couldn’t profit..

When attempting to up their tempo, the All Blacks committed uncharacteristic handling mistakes. If that wasn’t enough to keep South Africa in the hunt, the Springboks inevitably found injuries were handy to slow the All Blacks down.

Significantly, when the All Blacks were able to play at tempo the mistakes, and penalties, came from the South Africans and ultimately allowed the All Blacks to beat the Springboks at their own game.

The clash of styles touted before the Test was evident from the outset, New Zealand looking to move the ball as often as possible, and South Africa resorting to kicks.

The All Blacks had a reward after only two minutes when a pass that went to ground from first five-eighths Beauden Barrett was tidied by hooker Codie Taylor who ran back infield from the right flank, straightened, broke tackles and had wing Will Jordan on his outside to take the pass and run in the try.

But South Africa responded after wing George Bridge made a hash of a high ball from halfback Faf de Klerk for wing Sbu Nkosi to pick up the dropped ball to score.

De Klerk was the main option for South Africa with his kicks, especially as first five-eighths Handré Pollard twice over-cooked kicks, one going dead and the other a restart out on the full.

Mistakes were not the sole prerogative of the Springboks as handling mistakes several times prevented the All Blacks from putting the 57 per cent first half possession advantage to use. There were also issues at the scrum with prop Joe Moody conceding two early penalties.

South Africa also had to do without Nkosi either side of halftime for a deliberate knock-down of a prospectively try-scoring move with fullback Barrett for running into space.

But in the end the statistics told a story. New Zealand carried for 378 metres to 236, passed the ball 141 to 65, made 12 offloads to one but, in their haste, they conceded 23 turnovers to eight. However, the most important turnover was that secured by Tupaea to provide the match-winning penalty goal.

South Africa missed 23 tackles to 14 by the All Blacks and they made 38 kicks to 18 by New Zealand.

The centenary game was entirely reflective of the battles the two rivals have had through the years, and the satisfaction was all New Zealand’s with the Freedom Cup and the Rugby Championship the prize with the last game still to play in Brisbane next Saturday.