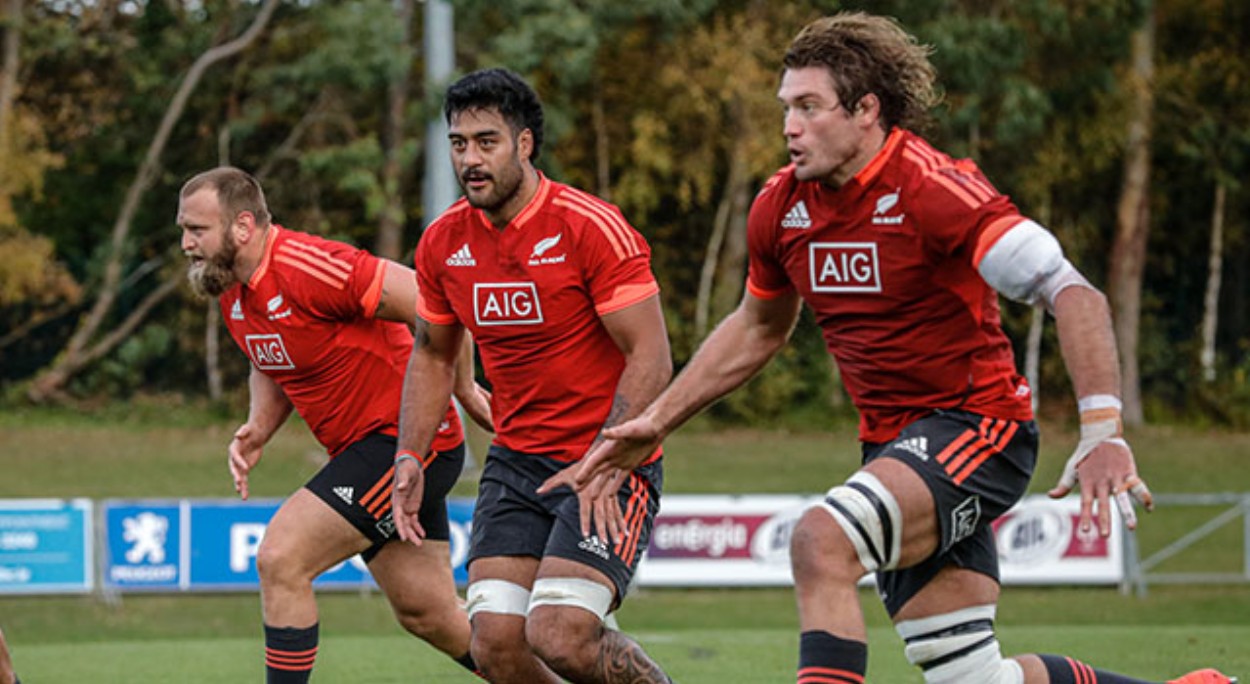 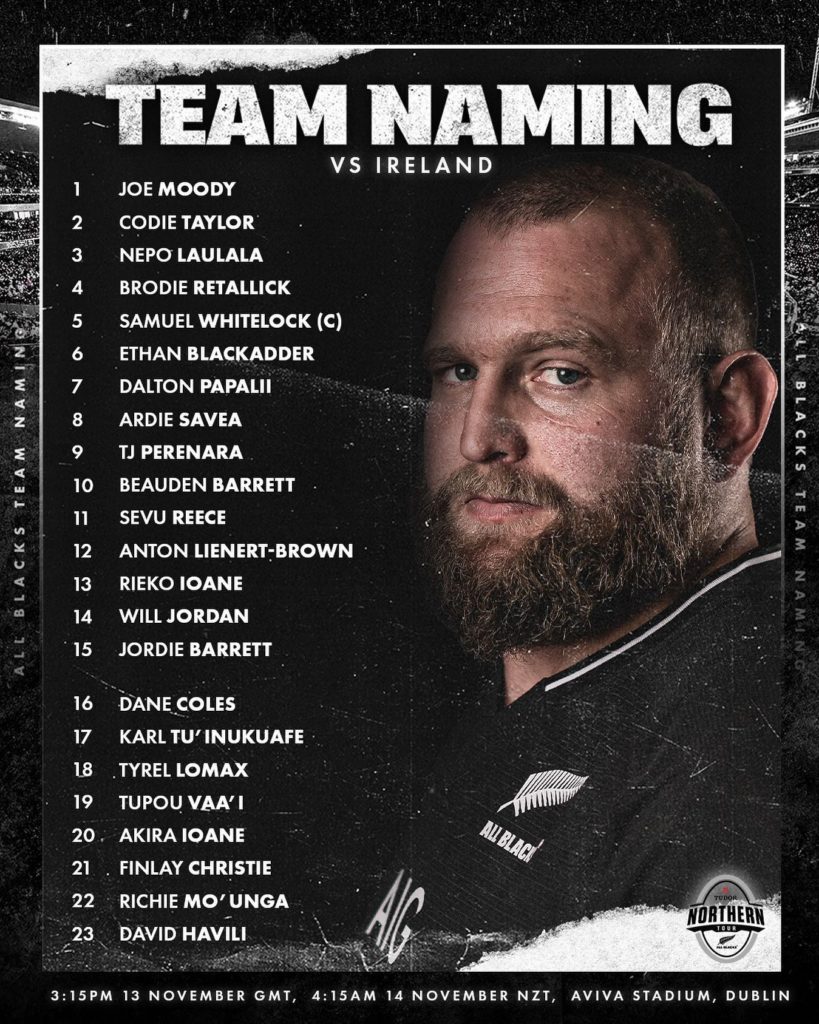 The All Blacks team has been named to play Ireland at Aviva Stadium, Dublin, Ireland, on Saturday 13 November. (Kick-off:  3.15PM / 4.15AM Sunday NZT). 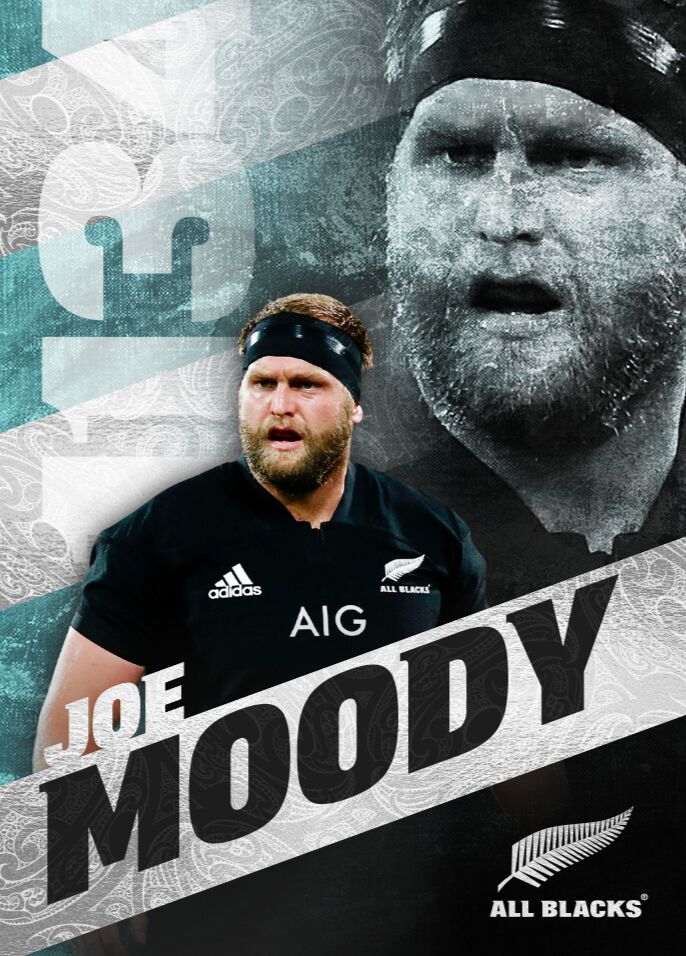 The forward pack which ran out against Wales two weeks ago has been retained, with the front row of Joe Moody, Codie Taylor and Nepo Laulala. The second row is the experienced Samuel Whitelock, who will captain the side, and Brodie Retallick, while in the loose forwards, Ethan Blackadder is at blindside flanker, Dalton Papalii is at openside, while Ardie Savea is number eight. Dane Coles comes in as reserve hooker, alongside fellow reserves: props Karl Tu’inukuafe and Tyrel Lomax, lock Tupou Vaa’i and loose forward Akira Ioane.

In the backs, TJ Perenara is at halfback, with Beauden Barrett at 10, while Anton Lienert-Brown moves to second five-eighth and Rieko Ioane is at centre. Sevu Reece is on the left wing, Will Jordan on the right and Jordie Barrett is at fullback.  Halfback Finlay Christie, first five-eighth Richie Mo’unga and David Havili are the back reserves.

All Blacks Head Coach Ian Foster said: “We’ve had a great week here in Dublin. We travelled well from Italy and are back into our more traditional routine of hitting a town and then moving onto the next one. The weather has been great here and we’ve enjoyed training in those conditions and getting ready for what will be a massive occasion on Saturday.

“We obviously have objectives we want to get out of each training session and we feel we have done that well.  The guys are focussed and we achieved what we wanted to achieve.

Speaking on the changes in the starting backline, Foster said: “That’s the way we finished the Welsh game, with Anton moving in, Rieko moving to centre and Sevu on the wing.  It’s a little bit of a reward for that combination. We’ve been able to use this series of games and the time together to try different things and thought a little change there would be good for us.  We’re also pretty excited at the impact that Finlay, David and Richie will have off the bench.”

Foster added: “We’ve watched Ireland’s development this year with interest, particularly through the latter part of the Six Nations and last week’s big win over Japan. They are certainly playing with confidence and ambition and represent a formidable challenge.

“We have no doubt what Saturday is going to bring at a full Aviva Stadium.  It’s a big occasion, rugby is back to Dublin in terms of full grandstands, so we know what it’s going to mean here, and we want that kind of stage. It’s big and it’s exciting and is what motivates this team.”

The All Blacks: With a history extending back more than a century, New Zealand’s national rugby team, the All Blacks, is not only the most successful international rugby team of all time but also one of the most successful teams in world sport, with a winning Test record of more than 75 percent. The All Blacks play European opponents every year in June and again at the end of the year, and play Argentina, Australia and South Africa annually in The Rugby Championship. In 2015 the All Blacks became the first team to win back-to-back Rugby World Cups, following their victory in 2011, and the first team to win three RWCs, with the All Blacks winning the inaugural Tournament in 1987. In 2013 they became the first international team in the professional era to go through the season unbeaten. The team has been named the World Rugby Team of the Year a record nine times and was Laureus Team of the Year in 2016.